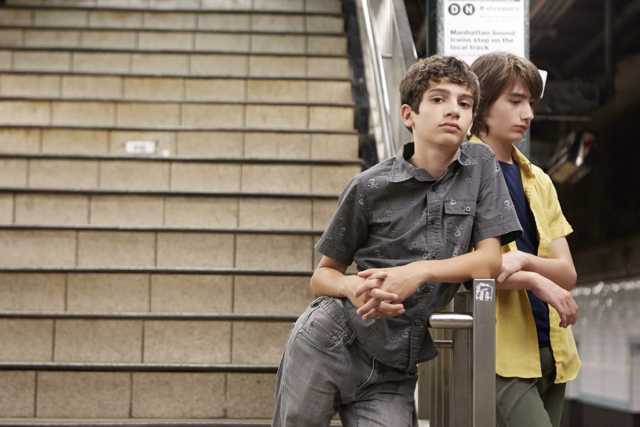 Face it. This has been a turbulent century so far for the average American when it comes to keeping body and soul together. It is widely understood that housing has become so monopolized and corporatized that families and individuals live on a slippery slope between a roof over their head and homelessness. And that inherited property, ironically, can lead to painful sacrifice and sacrificial lambs.

This crisis is poignantly humanized in director/co-writer Ira Sachs’s intimate and remarkable little gem of a movie titled Little Men. It has nothing to do with Louisa May Alcott’s classic novel but it may find it’s place as a classic of our own time in years to come.

The film centers on two middle school buddies, Jake and Tony. After his grandfather’s death, Jake’s family inherits the dress shop he rented to Tony’s mother, Leonor. Unfortunately, Jake’s family is beset with a combination of financial duress and, perhaps, greed. This compels Jake’s father, Brian, to reluctantly play the heavy in asserting a financially unfeasible rental revision for Leonor. Exacerbating the dilemma is that Jake and Tony have developed a splendidly supportive friendship rare among adolescents.

Theo Taplitz as Jake and Michael Barbieri as Tony give touching performances that wrench the heart. Greg Kinnear brings a world weariness to the role of Jake’s father and Jennifer Ehle finds a sense of humanity in his mother, a woman who empathizes with all parties concerned. Paulina Garcia elicits profound bitterness as the evasive Leonor. It’s a great performance that might have you both rooting for and despising her. She says what she feels she has to say and it can be cruel, unfair, and uninformed. But we wonder if we, ourselves, wouldn’t behave the same way she does if faced with the same problem.

Co-writers Sachs and Mauricio Zacharias have boldly penetrated the anguish within contemporary issues of housing and solvency, how the lives of children can be utterly devastated, and how adults hew to coldly, if not harshly, practical ways of addressing problems. You may say to yourself after seeing it: something has to change! Little Men captures the zeitgeist of our time.