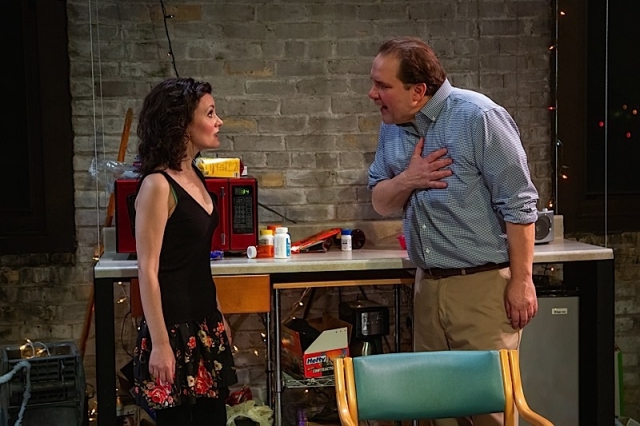 When 27-year-old Una attempts to reconnect with middle-aged Ray, who molested her when she was 12, a Pandora’s Box of emotions opens in Blackbird by David Harrower. Dark & Stormy Productions offers a beguilingly intimate interpretation directed by Michaela Johnson with disarmingly natural performances by Sara Marsh and Luverne Seifert at the Grain Belt Warehouse. 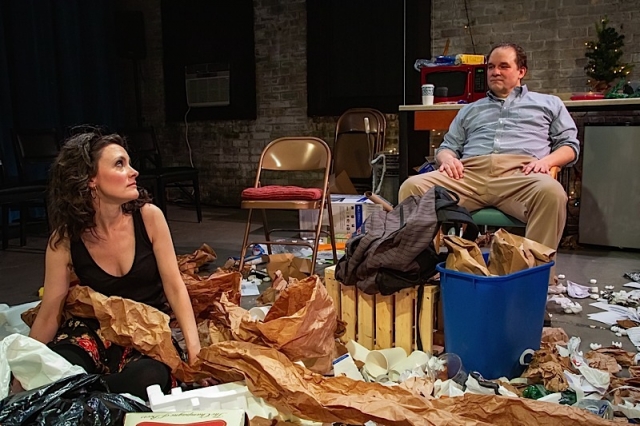 The setting is a break room, overflowing with clutter—a metaphor for the subconscious of both characters. When Una unexpectedly shows up at Ray’s workplace 15 years later, is it simply to confront him in order to come to terms with the wrong done to her? Or does she want to blackmail him in the spirit of vengeance? Or is it something else? No easy answer is given in Marsh’s penetrating and fascinating performance. We’re made to consider that Una’s intentions may not fit the standard explanation of the proverbial “return of the wronged”. This is what Harrow intends. Paradoxically and mystically, Marsh goes to a place beyond words in a play powerfully driven by language. 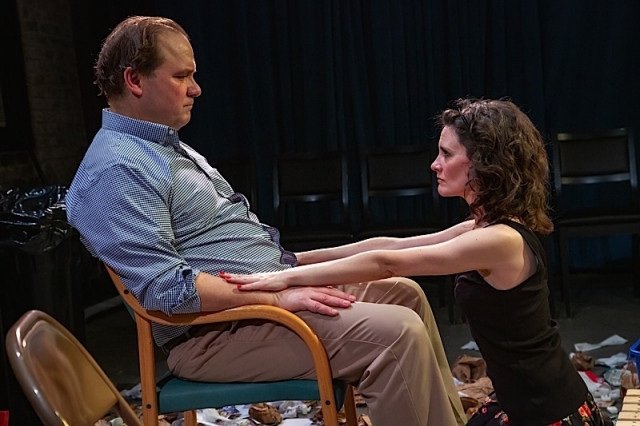 Seifert, known for his first-rate stylized performances at Theatre de la Jeune Lune and 10,000 Things Theater, has never has been as naturalistic as he is in the role of Ray. Just as Una has been implacably stuck in the psychological ramifications of the sexual abuses he perpetrated upon her, so Ray has become inextricably bound by his trespasses against her. Seifert seems to sizzle in the role with an anxiety that clearly has come to rule the character’s life. We wonder if he has relapsed or reformed? The answer to that is unnervingly unclear, which is also, just what the play intends. Seifert fluidly channels the inescapable power of conscience in a world where forgiveness is unavailable.

Harrower has rendered characters that are mysterious and tormented to the core. His is an Old Testament sensibility. The costs of pedophilia are never repayable in the world of Blackbird. Both victim and victimizer are inexorably chained to consequences.