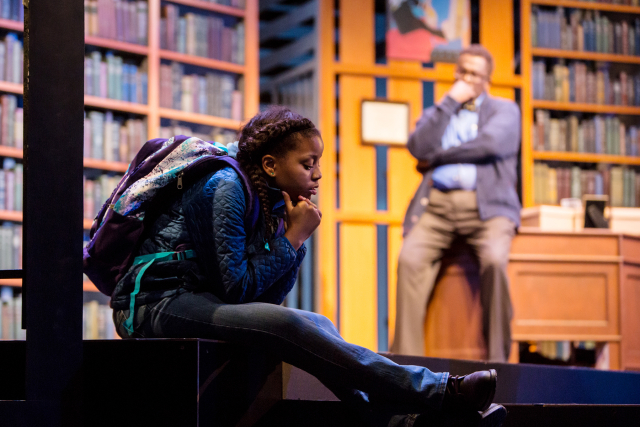 Cheryl West (Jar the Floor) has adapted Doug Atchison’s 2006 screenplay for Akeelah and the Bee into a resplendent new play at the Children’s Theatre. Johanna Easley gives one of the most endearing performances you will see this year. She plays 11-year-old Akeelah, a girl whose prodigious spelling ability is both derided by jealous fellow students and unknown to her overworked mother. But then, her mother, like Akeelah and her brother, Reggie, are still reeling from the recent death of her husband and their father from gun violence. One of the many features of this richly complex but straightforward play is its implicit understanding of grief processes.

Fatefully, Akeelah can no longer hide her brilliance from the world despite being a girl being raised in a rough neighborhood with various layers of resistance bearing in on her. Again, fatefully, she is taken under the stern wing of Professor Mark Larabee (James A. Williams in top form) who coaches her on the origin of words and correct spelling in hopes of becoming the national spelling bee champion. And be warned, most of such words that come up in the play may make your head spin! (You may be smarter when you leave the theater, as well as being deeply moved).

Easley and Williams create a beguiling chemistry. She boldly stands toe-to-toe with his gravitas. This results in warm with and moving epiphanies. *Director Charles Randolph Wright’s entire production glistens with superb performances by both adult and younger actors. Zaria Graham is enjoyably volatile as Georgia, Akeelah’s gal pal. In a year in which Aimee K. Bryant has uplifted in The Color Purple at Park Square, The Gospel of Lovingkindness at Pillsbury House, and in The Nature Crown from Theater Forever at the Guthrie, she shows us once again why she persists as being one of the most likable presences in Twin Cities theater. Her terrific turn as Akeelah’s beleaguered mother on the one hand frustrates because she can’t see her daughter’s brilliance, and on the other you can’t help but empathize with this single mom. Greta Oglesby as their devout neighbor and Shawn Hamilton as Drunk Willie bring zestful vitality to their roles.

The pressure on kids to be perfect is one of the play’s piercing indictments. This is chillingly rendered by Michael Sung-Ho as the overbearing father of prodigal speller, Dylan, played to ultimately touching effect by Sean Phinney. Mirroring this is a vulnerable Nathan Barlow as Reggie and an intimidating Darius Dotch as his questionable older street associate. Leo James charms as Javier, a boy competitor infatuated with Akeelah. He symbolizes sweetness and sportsmanship. What a wonderful message for people of all ages and races.