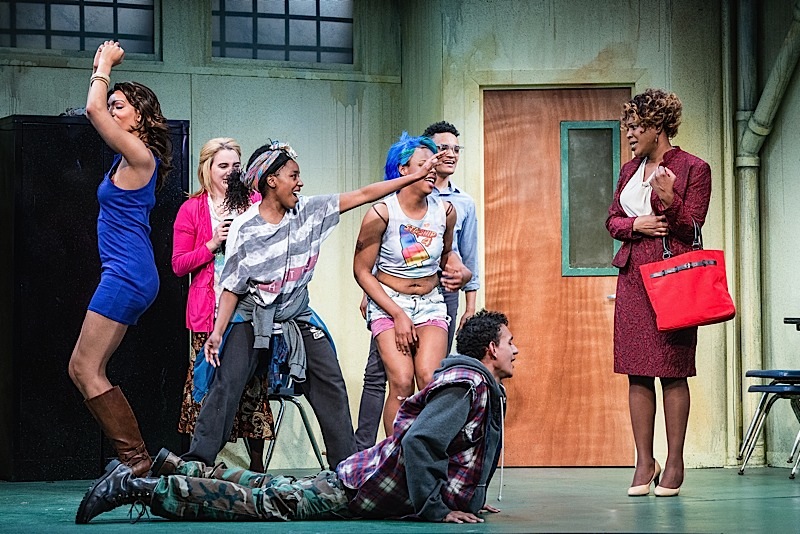 The generation gap between older and wiser trans elders and younger, less disciplined youth and middle-aged and humorless queer bureaucrats, is boldly realized in the Philip Dawkin’s landmark comedy, Charm, now in a vibrant production at Mixed Blood. The setting is a youth center in Chicago’s Halsted area and the time is now when queer youth and others have fallen through the cracks caused as much by the economic gulf as by identity-driven discrimination. Single-issue identity politics-driven voters may find this play uncomfortable to watch because sloganeering about your pet cause, no matter how right you are about it, won’t even begin to address this problem.

Of course, problems emerge in our lives, often because of poor communication skills, which is what Charm‘s protagonist, Darleena Andrews, is out to set right. She is a trans woman in her 60s and has not just seen it all, but has processed her experience and decades of observation, with remarkable depth. As anarchic, self-absorbed, and self-indulgent as the youth and the administrator at the center where she teaches etiquette are, she keeps to her course and shows what queer folks of character must do to win the day. 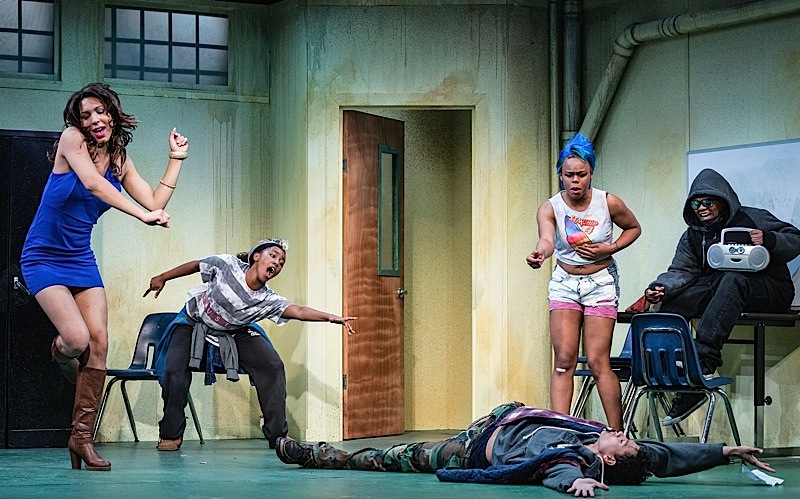 Julienne “Mizz June” Brown is simply and absolutely divine as Darleena. This character is actually a real life person who took on the hardened bigotry of the right intrinsic to our culture, the callous anarchism of undisciplined youth, and the totalitarian-proned political correctness that mindlessly permeates much of the identity politics-driven Left. How ironic that the politically correct would dish out so much strident disrespect to a trans woman of color. Not to mention the ageism! The term “survivor” is tossed around a lot these days, but Darleena is someone who has earned the right to claim that.

The savvy Addie Gorlin has directed a dream ensemble of young actors who have clearly delved deeply into their characters. These brilliantly observed performances give us the very essence of distinctly drawn individuals in a society where humanity is trumped by greed, inattentive parenting, and a rat race mentality. They are shaped by Darleena’s transformational magic, a magic which Dawkins intimates maybe even we, the watchers, might adapt to our own lives.

Gorlin’s social consciousness merged with identity consciousness serves the play splendidly. Rehema Mertinez gives a brave and textured performance as Ariela, a woman whose ethics are seriously compromised, yet we understand the curve ball our culture has thrown her. Jennifer Waweru and Ryan Colbert are terrific as a couple grappling with issues sprung from what Bernie Sanders might call our prison-military-industrial complex. Colbert also does some dandy dance moves. Nathan Barlow endears as Logan, a young effervescent gay man of color who hasn’t had the bad breaks the others have endured. 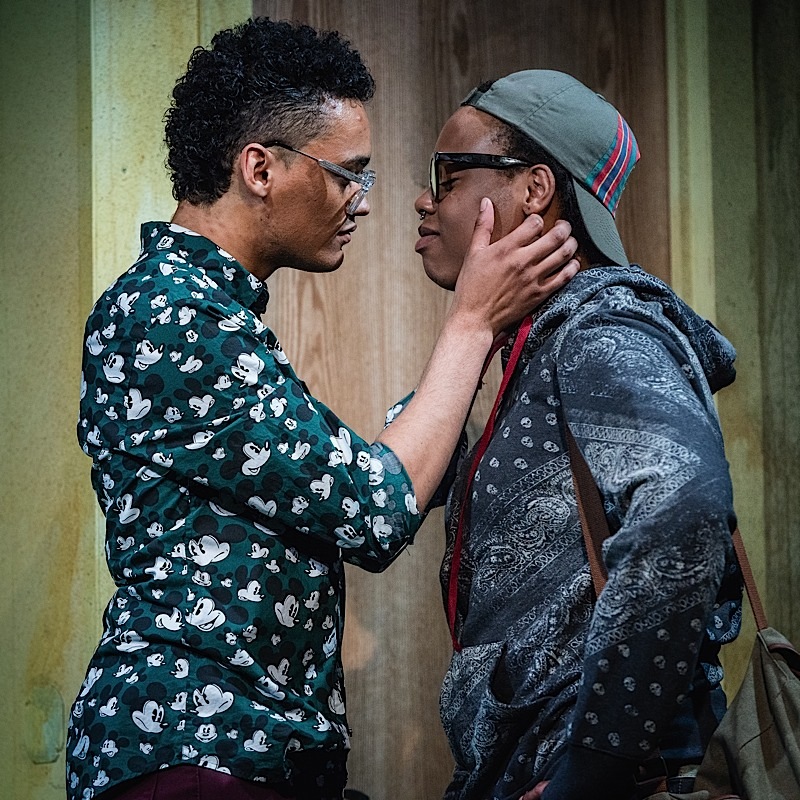 Jay Simmons is striking in portraying a consciousness shift as Beta, a trans man targeted by the gang culture that took root back in the Reagan years and which still works its ugliness. Alyssandra Taylor also brings us lovely transformational moments.

Jay Owen Eisenberg plays Lady and another role I won’t reveal for the sake of those who have yet to see the show. Eisenberg’s Lady is a poignant evocation of real trauma caused from being psychically hammered down for being different. The character Eisenberg plays in another section, in a touching scene with Mizz June’s Darleena, echoes of the end of Caryl Churchill’s gender-bending classic, Cloud Nine. 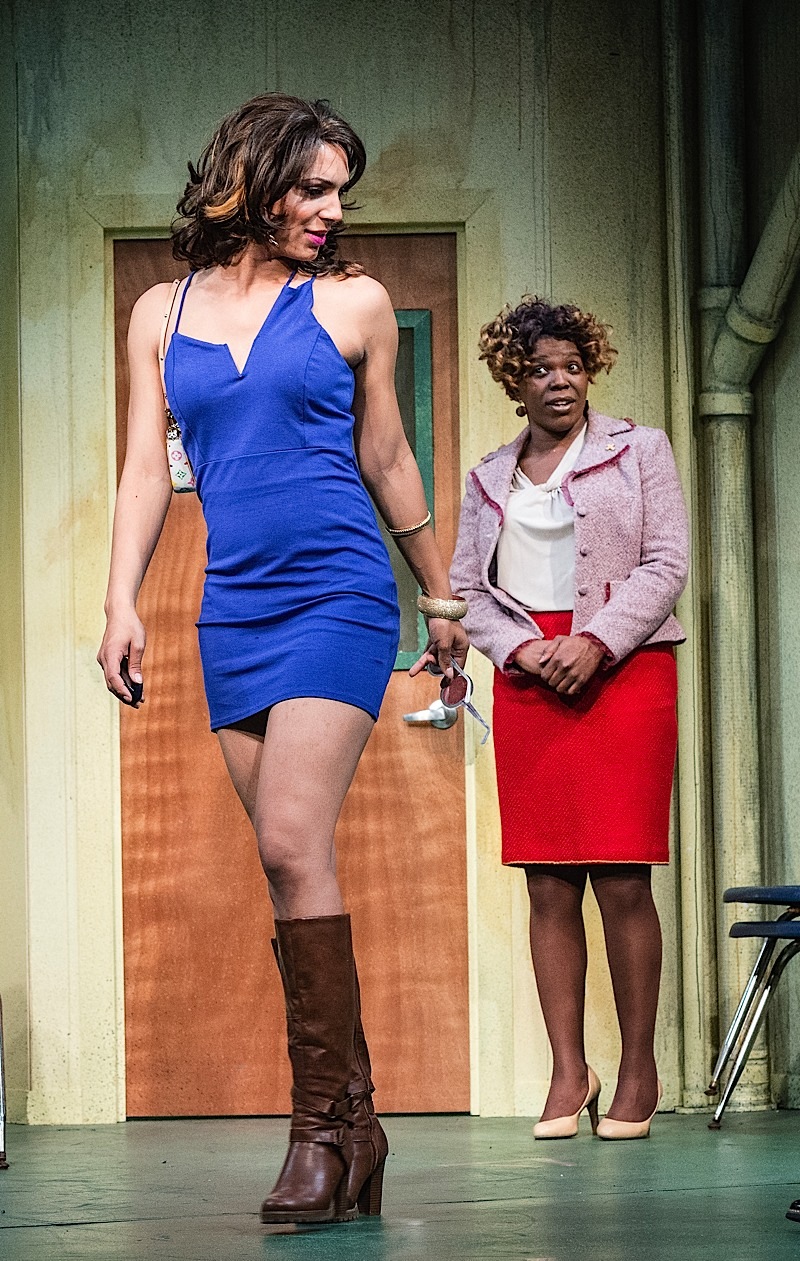 Charm also serves up food for thought about the questionable way in which 501c3 mentalities and the proverbial zero tolerance dictate actually manifests. Meighan Gerachis as the face of that is compelling and should raise discussion among GLBT people and their straight supporters. What Dawkins doesn’t address (nor should he have within the contours of this play) is that centers for disenfranchised youth, queer and otherwise, have been plagued with ethical concerns that have led to serious problems. There is a tendency in our “Ellen Era” of constantly celebrating, as opposed to analyzing and reflecting, that GLBT people have become inattentive to this. Hopefully, we will outgrow this.

Meantime, Charm is a must-see production that clarifies today’s socio-economic breakdown. Mizz June is our Sidney Poitier and Dawkins’ Charm is a To Sir With Love for a new era when queers and non-queers alike will look more closely and compassionately about what young people and wise elders are up against.