Center of the Margins Festival of Plays About Disability 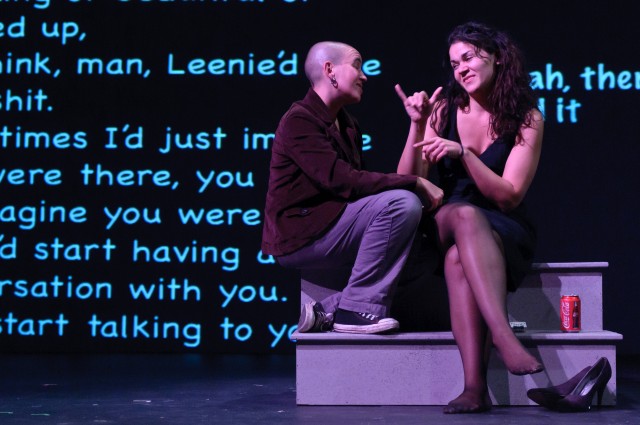 Gruesome Playground Injuries & On the Spectrum
Through Nov. 27
Center of the Margins Festival of plays about disability
Mixed Blood Theatre, 1501 So. 4th St., Mpls.
(612) 338-6131
www.mixedblood.com

Mixed Blood has changed this play’s central deaf male/female couple to a deaf butch/femme lesbian couple. It spans two decades and there’s nothing in the dialogue or in Aditi Kapil’s directorial concept to address the dual marginalization issues of being deaf and being lesbian. So it seems like its lifted totally out of social context. And to give the production the benefit of the doubt, maybe that’s the idea. Imagine if those problems didn’t exist and maybe this is how things would look. Well, whatever. The actors communicate in American Sign Language and those who don’t understand ASL can read the dialogue projected above the action.

Nic Zapko as butch Dag and Alexandria Wailes as femme Kayleen are engaging and find satisfying moments of connection. They’re complemented by Nicolas Carter’s splendidly celestial score and accompaniment. This production also opens up legitimate questions, in the case of the butchness, about where brave gender exploration ends and emulation of asinine macho behavior in the name of ‘gender exploration’ begins.

However, playwright Rajiv Joseph has the characters use forms of the word ‘retard’ throughout. In childhood, such hurtful terms can be accurate reflections of children who’ve yet to be made to understand such terms are bigoted. But regrettably, here they are used in scenes of their adult life when such usage registers as immature – at best. The problem is that neither of the characters is actually mentally retarded, or if they are, the script does not seem to go there. Dag certainly is crude, often inappropriate, and disrespects various boundaries, but she does not register as mentally retarded. Therefore, it cannot be argued that this is disabled culture’s own specific language. In fact, many disabled people consider the R word to be like the N word.

The N word, when used to convey certain aspects of African American life, as in August Wilson’s modern historical plays and in Langston Hughes’s plays, is generally considered acceptable because the context is made so thoroughly and intricately clear. The CS word and ‘faggot’ are often seen as acceptable when they convey a gay ghettoization or homophobic bigotry. Those terms have also been used with the C word to show the connection between homophobia and misogyny. Straight playwrights Neil LaBute and David Mamet sometimes use homophobic and sexist epithets to reveal negative machismo. Some British social dramas also use the C word to convey the coarsening of working class life. So I’m not advocating policing of language. But when inflammatory words are used, be conscientious and create a context please!

This heterosexual love story about a young autistic man who tutors a young autistic woman is a heartwarming gem. Laura Robinson’s Iris and Skyler Nowinski’s Mac compel non-autistic audiences to directly deal with the autistic rhythms of their characters so that we get a feel of the realm they live in. We also realize that their autism may give them access to a certain vein of intuition that those of us who are not autistic may not have access to.

Robinson and Nowinski give lovely performances directed with sensitivity by Jack Reuler. Regina Williams is pitch perfect as Mac’s overprotective mother Elisabeth. Playwright Ken LaZebnik’s intense passage about how technology has come to control us is so authentically delivered by Williams that it captures the very essence of our time.