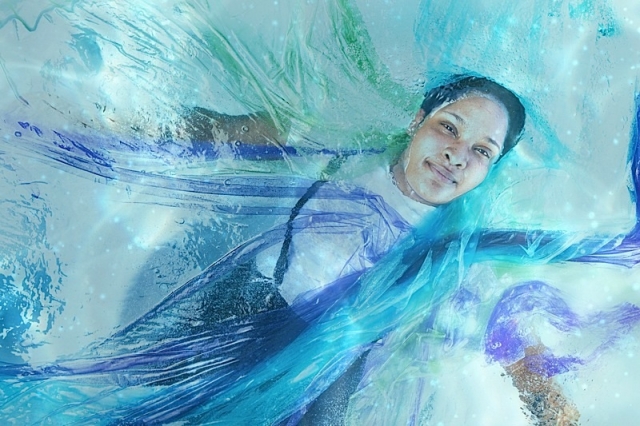 dat Black Mermaid Man Lady / The Show enchants with a four person acting ensemble that flows and glows in a stream-of-subconsciousness parade. This quartet masters sumptuously lyrical language, dissolving gender and the finitude of earth-bound space itself beyond the American South setting. At certain points, Mankwe Ndosi’s vocal compositions, beguilingly rendered by the actors, border on sublimity. Yoruba spirituality and gospel blend celestially among other elements, including echoes of Hip Hop, Jazz and Soul.

dat Black Mermaid Man Lady, created by Sharon Bridgforth, honors ancestors and you can even write a note of your own to be left at an altar in the Pillsbury House lobby. In that space the show begins with a processional that descends the stairs and onward into the theater where the audience follows. Spectators take seats as the cast takes the stage. Kenyai O’Neal dazzles as a transfiguring character who crosses lines between genders. Fellow performers PaviElle French, Florinda Bryant, and Aimee K. Bryant exude vocal and physical fluidity as if manifesting phantoms. They seem to conjure a brave new dimension where tolerance, acceptance, ease, and celebration of otherness are headed toward hegemony.