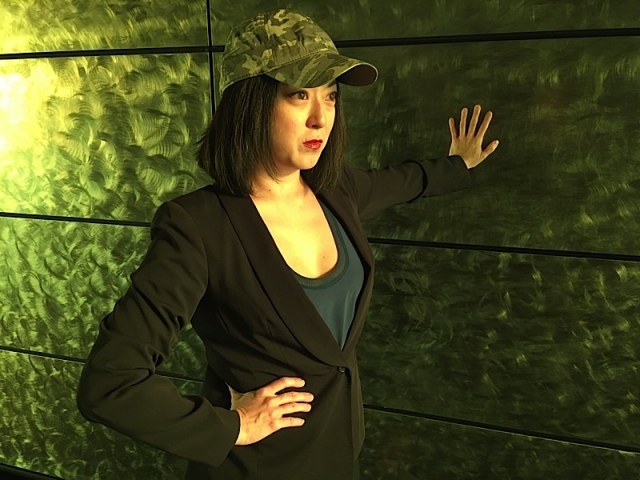 Tennessee Williams once said in praise of the younger Joan Didion that she had a special way of perceiving the realities and the unrealities of the time they were living in. I wonder if the great “Glorious Bird” as Gore Vidal affectionately called him, might say the same of playwright Christopher Chen were he still with us. Well, I certainly would! The Full Circle Theatre Company’s production of Caught, Chen’s play about pretentiousness, exploitation, and postmodernist deconstruction of contemporary art would surely be worthy of similar praise. It plays in the Guthrie’s Level 9 Dowling Studio, an ideal location for the heady mischief this intimate, yet big, play frolics in.

To say that Chen spoofs that world is not the verb to describe how Caught works as a play. Though the interchanges throughout can, should, and will be seen as outlandish. Nonetheless, if you’re someone who tracks the world of art and multiculturalism, you may recognize that what unfolds uncannily mirrors circuitous and convoluted ways wherein art has come to be portrayed in the media and the public sphere.

There are several angles which Chen’s text lays out and director Rick Shiomi piercingly realizes them through an acting ensemble that effervescently flickers with wit, intelligence, and an undercurrent of psychic cultural warfare. And you can decide for yourself after you’ve seen this fascinating production, who you think is losing and who is winning.

Caught’s imaginative unpredictability means that in writing about it, the reviewer must be aware of spoilers. The production actually starts pre-show as the audience goes onto/into the playing area where Mina Kinukawa’s handsome set, strikingly like a modern art museum gallery, showcases sleekly harsh visual pieces that reflect punitive and intimidating images critical of contemporary Chinese totalitarianism. Dapperly dressed docents (costumed nicely by Khamphian Vang) pleasantly guide the patron, i.e. audience member. The sanitized cocktail party sense of a gallery opening where one typically hears phony-baloney comments like “Oh, isn’t that interesting” is in full swing from the get-go. Though, to be fair, I didn’t hear anyone one say such a thing at the Dowling Studio pre-show. But if you’ve been to one of these in “real life” you know what I mean. 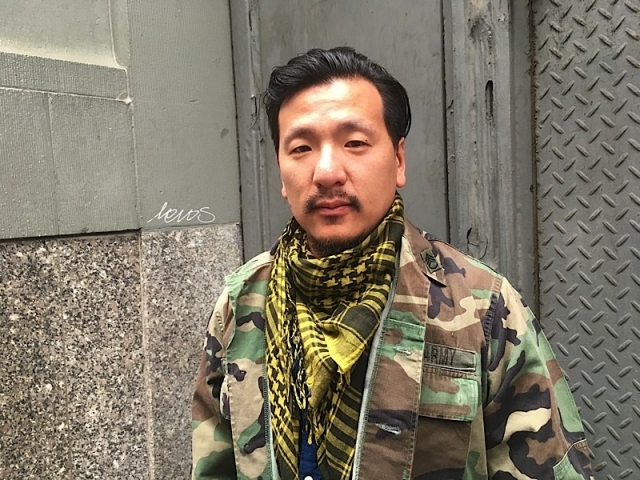 The action and dialogue of Caught’s three scenes in 90 minutes begins with Brian Kim in a transformational performance as Lin Bo. Kim’s very physical essence seems to organically shift in the duration of this role of a Chinese dissident artist whose time incarcerated in the post-Tiananmen Square era has come under scrutiny. Americans who recall this period may be made to consider that tyranny wasn’t buried with Chairman and Madame Mao, or that perhaps the U.S.-China Relations Act of 2000 wasn’t the sunny wonder it was cracked up to be. American conventional wisdom is quick to pile on Russia, which is fair enough. But China often seems to get a pass. Revelations about sex trafficking between North Korea and China serve as a recent example.

Questioned by Joyce, a gullible journalist, Lin Bo appears quite sympathetic—at first. However, as new information emerges, Erika Kuhn gives us a Joyce that truly tickles the funny bone. Discombobulated, she seems to be having veils lifted from her eyes every few minutes. She exemplifies a “Chenesque” observation of American naivete, an idea that recurs within the course of the play. Such observations are not “anti-American”, but may actually be legitimate warnings to Americans that we really need to question not only the art we see, whatever art form it is, but the tastemakers and critics who carry heavy influence on what is seen and what is not.

Edwin Stroud shines in a maddening role as the unlikable magazine editor whose obnoxiousness is balanced out by the fact that he is rightly correct about something crucially important. He’s that annoying kind of guy who reminds us that truth isn’t necessarily packaged in politeness, congeniality, and grace. Truth can be blunt, to say the least. 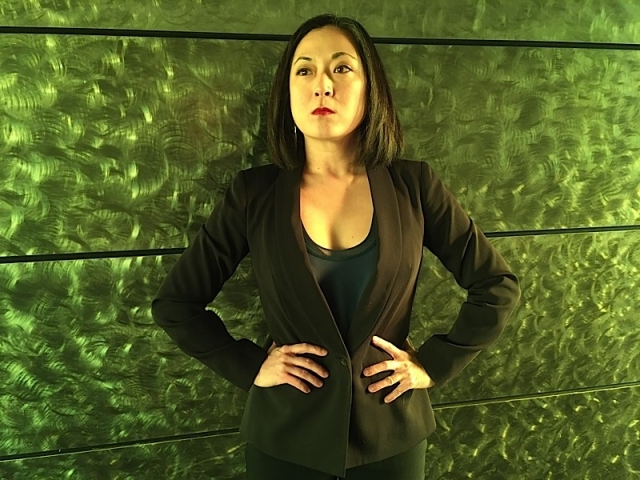 The second scene is a brilliant look at how cultures and nations place their own specific lenses and prejudices onto other cultures, nations, and by extension, works of art. It’s set up as a discussion for the audience, the sort of which any steady museum patron has likely attended. Shana Eisenberg, in a turn reminiscent of a public radio author interviewer, plays Susan, a curator-interviewer and Katie Bradley plays Wang Min, an installation artist, whose work comments on labor conditions in China’s IPhone industry. As with Lin Bo, one questions the content of the character of her art work. However, there’s a significant difference: Wang Min puts forth her intentions outright. However, questionable one might think they are, she seems to be up front. You the audience member can decide whether she operates in a zone of integrity or not.

Some questions her character, dynamically acted by Bradley, may bring up: Is Wang Min an ambitious moral relativist who grants herself the artistic of privilege of fudging the truth in order to push emotional buttons? Or is she a genuine truth seeker? Is she simply screwing with the patron’s mind? Or is she someone with an axe to grind against the good old U.S. of A? Those who have seen the superb documentary, Steve Jobs: The Man in the Machine (not mentioned in Chen’s play, it should be noted) which delves into China’s controversial relationship to Silicon Valley, will likely find Wang Min’s overview a valid one, whatever its holes. Or maybe not. Either way, her installation work raises questions that need to be answered, whether raising those was actually Wang Min’s intention or not. Furthermore, this points to the issue of the ethics of disinformation-misinformation being used for “good”.

Bradley dazzles as the character adroitly subverts the assumptions with the intellectual jujitsu those familiar with postmodernist fanaticism will recognize. Methodically she sears into the jugular of the simplistic Susan. What’s delicious about this is that Chen is not on the same old hackneyed anti-media bandwagon with its endless shrieks against Fox News, though Fox News isn’t let off the hook by the way. But Chen is focused on exposing the creamily poised fecklessness that one associates with public radio and public television, and network programs often smuggled into public media disguised as “objective”. This is personified in a performance played to perfection by Eisenberg. Again, Chen’s American media woman is discombobulated and undone. Altruistic vacuity crumbles under complex perceptions of realities expressed by the human cyclone named Wang Min. This is perhaps one of the most problematic characters in contemporary drama, and Bradley is devilishly superb. 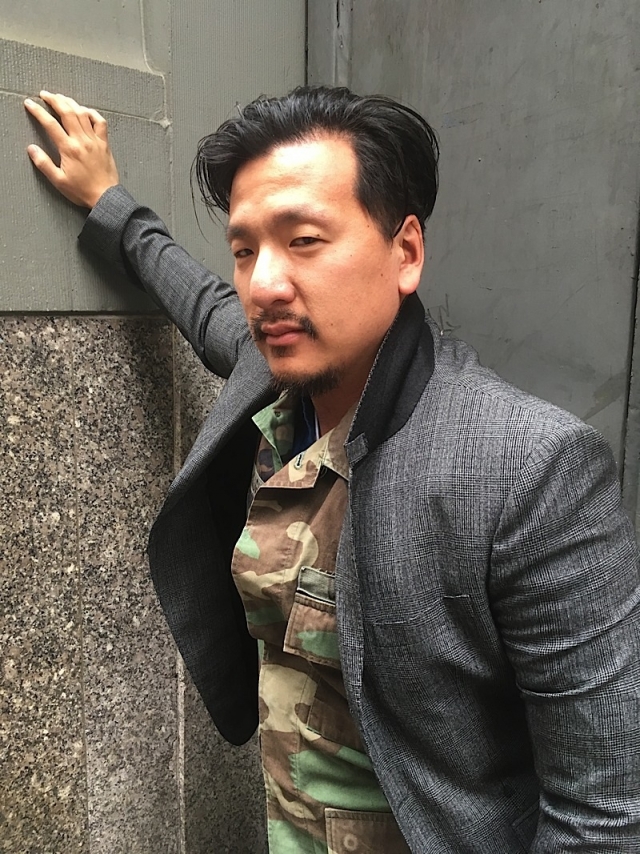 Moreover, the third scene is quite simply one of the most fascinating pieces about bisexuality in 21st century theater. Caught is a gift that keeps on giving as the tables turn toward a more realistic, albeit, no less complex inquiry into messy human relationships as opposed to the artifice-driven world of art. Bradley and Kim play two people of opposite genders who had a close relationship with someone they each knew well. Very close indeed. I take it to be a reflection of one of those uneasy issues between women attracted to men v. men attracted to men. It raises questions of who may have been loved and valued more. And yet if the two survivors who were both loved to a considerable degree by the dead mutual lover are still deep friends, how does one handle the potential resentment? He loved me more than he did you! That sort of thing. Others may well see this scene totally differently. But in an era where it seems that gender identity controversies have trumped the serious discussion of sexual orientation and its connection to romantic love, Chen opens a window back into that. Thank God.