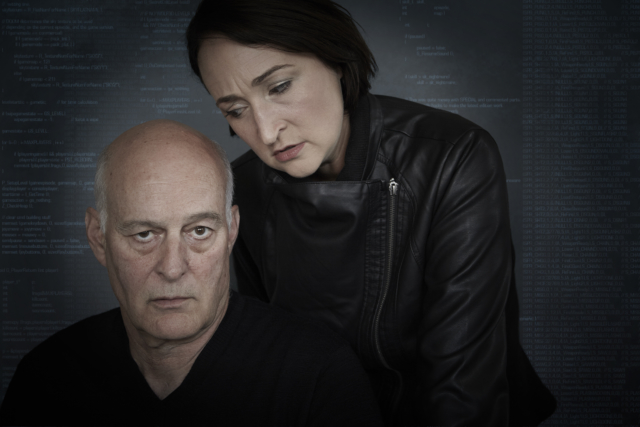 Playwright Jennifer Haley has written one of the best plays of this decade with The Nether. Moreover, director Casey Stangl has staged this emotionally difficult and intellectually demanding piece with the electrifying power it necessitates. This thriller dares to objectively peer into that most explosive of issues —the use of children’s images for the purpose of online fantasy. Moreover, this is not just about eroticism, but about virtual sadism and snuff!

The setup is an interrogation cell where Sims (Stephen Yoakam), a middle-aged man, is grilled by Morris (Mo Perrry), a younger woman who has been surreptitiously investigating and shaping a case against him and the clientele of an online adults-only domain he owns, coyly named The Hideaway. What ensues is a miraculous dramatic blend of a thriller and Socratic dialogue, albeit an impassioned Socratic dialogue. Few plays have ever achieved this blend, where you are on the edge of your seat while processing a brilliant philosophical inquiry simultaneously. Like Jean-Paul Sartre’s No Exit (1944), Jennifer Haley’s The Nether (2013) achieves that.

It is a risk for any theater anywhere to stage this play. First off it requires a director and actors who will actually “go there” and our society sets up all sorts of barriers to allowing this inquiry to actually take place, ranging from political correctness to religious indoctrination to overthinking to self-righteous guilt-tripping that can come as easily from the Left as by the Right, etc.

The Jungle Theater has met the challenge with a luminous production directed by Casey Stangl. On just the basic level of engaging an audience, this heavily language-driven drama never gets static. The enthralling Yoakam and Perry go full-throttle into a muscular psychological interchange in which Sims doesn’t buckle under the shame and exposure most of us would expect. He holds his own, though that doesn’t mean he will win every audience member’s approval. And the same can be said of Perry’s Morris, a character one would expect to overwhelm anyone she takes on. The conflict between them is utterly Titanic.

Yet another master stroke in this production are Kathy Maxwell’s projections that resonate of certain Soviet cinematic works and Ingmar Bergman with their close ups of the Jungle actors simultaneously as they speak on stage. Typically, this sort of choice oversaturates and scatters focus, but here it complements with a raw visceral sense that privacy has just been stripped away. We, the audience, are voyeurs. We wonder if we really have the right to be in so intimate and impersonal interaction. This productions is that profoundly authentic!

Lee Savage’s set design is a breathtaking contrast between the stark interrogation cell and the ironically storybook look of The Hideaway wherein an actual child actress, the adorable Ella Freeburg, wins our hearts, a vision right out of Lewis Carroll. Two more marvelous performances add to this ingenious production: Craig Johnson brings a palpable sense of shame to client Cedric Doyle and a subtle sense of unrequited homoerotic affection that only adds to this actor’s remarkable artistic record. The other is the superb Jucoby Johnson as Woodnut, an investigator whose supremely professional persona is psychically affected by The Hideaway.

Stangl directed Wendy Wasserstein’s controversial final masterpiece, the politically incorrect critique of academic feminism, Third, for the Guthrie. It ranks as one of the best Guthrie productions of the past several years. Stangl, a longstanding feminist and progressive herself, lives in Los Angeles now, but when she directed plays in Minneapolis in the 1990s she was generally considered to be one of the Twin Cities’s top female director alongside Wendy Knox and Lynn Musgrave. She founded the edgy Eye of the Storm Theatre and directed comedy at the Brave New Workshop which boldly challenged the thinking of feminist doctrine as posited by Andrea Dworkin. Therefore, it is no wonder Stangl has the insight and wisdom to handle a dramatic minefield like The Nether so brilliantly.