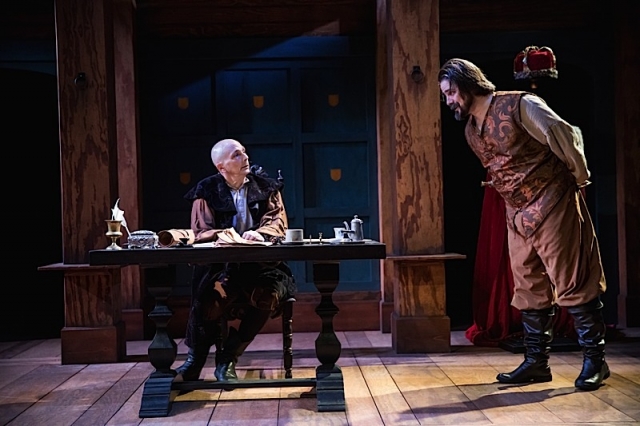 Equivocation, a play by Bill Cain, speculates that the 1605 Gunpowder Plot to blow up the House of Lords did not actually happen the way history books tell us. At that time, William Shakespeare was Britain’s star playwright and the favorite of King James I. But even the favorite had to watch his step in a kingdom where Catholicism was illegal and acts of sedition could get you hanged, though not quite to the point of unconsciousness, and then drawn and quartered. Due process be damned. 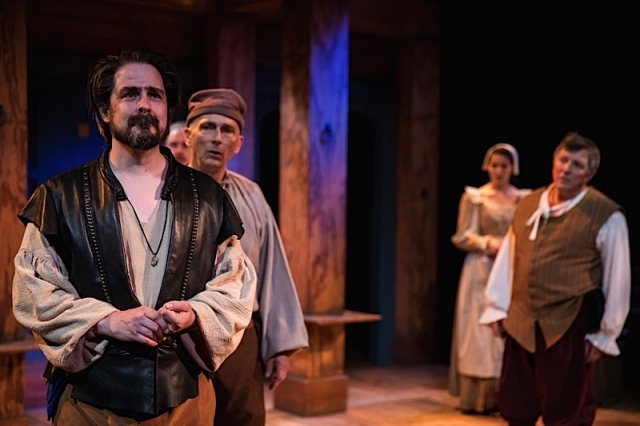 Cain adheres to what has come to be widely accepted: that Shakespeare was a closeted Roman Catholic in a nation where the Church of England was essentially the state religion. As Vanessa Redgrave and countless others have remarked of James’s predecessor, Elizabeth I, her kingdom was a tyranny and it remained so under James. Therefore, Catholic activist responsibility for the plot is settled history. Nonetheless, Cain’s play theorizes: what if a conspiracy may have been hatched by the Crown to scapegoat innocent Catholics? What if it was a Jacobean effort at mass disinformation and the demonization of the Church of Rome in the service of English nationalism? Cain even takes the step of naming his Shakespeare protagonist character, “Shagspeare”, or “Shag”, as if the Equivocation playwright himself is writing in a conspiratorial code. 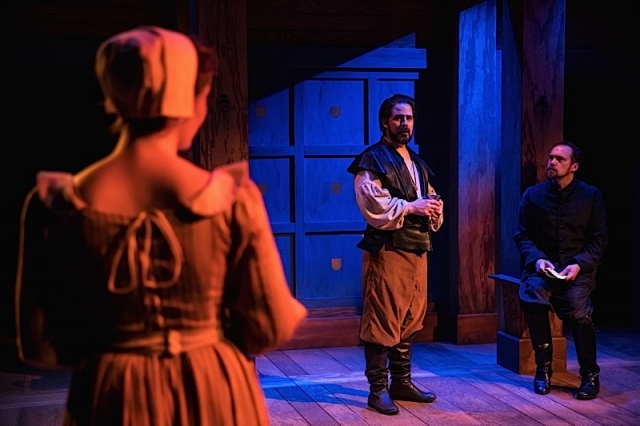 Walking Shadow Theatre Company director Amy Rummenie has steeped herself in the history and textures of Equivocation’s time and it shines through the performance on the Gremlin stage with dark lustrous majesty. Her approach exemplifies how rich a staged work can be when the director delves deeply into the meat of a substantive historical text. In recent years, a few other area directors have also achieved this: Michael Brindisi with Camelot at Chanhassen Dinner Theatre, Joseph Papke’s Classical Actors Ensemble staging of The Roaring Girl, and director Meggie Greivell’s revival of The Bassett Table for Persistent Theatre Productions. These demonstrate how there are still serious directors across the generations who grapple with classic plays on their own terms, and not bend them opportunistically for the sake of trendiness. And right here in the Twin Cities!

In Rummenie’s production Damon C. Mentzer is a divine mixture of the robust, the macho, and the cultivated. As Shag, he embodies the kind of man Shakespeare likely was. As all devotees of the Bard will tell you, the great playwright possessed the common touch for common people and understood the elites of his time and times past with piercing perception. Country vs. City reverberates throughout the canon. Mentzer understands this and probes the inner conflict of a man torn between two sacred standards: adhering to his King v. adhering to his God. The rub is that the monarch was universally thought to have been picked by God himself. What a dilemma! 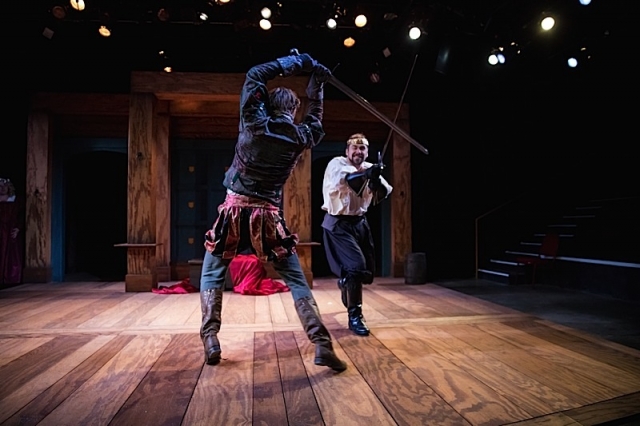 The rest of the men in the cast play various characters, and they do so quite well. But each has a standout turn with combat consultancy by Annie Enneking. In what is the best performance I’ve ever seen by John Heimbuch, his turn as Jesuit priest Henry Garnet is superb. He finds delicate vulnerability as a man facing his certain death. We’ve all seen characters play this sort of thing in movies and plays, but Heimbuch deeply elicits the profound sense of one anticipating his encroaching end and just how fleetingly mortal we are. This itself is of Shakespearean consciousness: think “To be, or not to be” among so very many other lines. Heimbuch also taps into how the visceral ephemeral power of how faith compels and impels human behavior.

Peter Simmons plays the infamous Lord Cecil, the man who seems to have been the guiding influence behind the throne. Cecil was the consummate Machiavellian and is the source of the devious Polonius of the Hamlet tragedy’s inner circle. The beauty of Simmons’s portrayal is its understatement. He reveals the character’s evil inner nature without signaling it overtly.

Mitch Ross makes a terrific impression in two roles. As a young actor in Shakespeare’s acting troupe, he epitomizes the craven, yet understandable drive in a bright ambitious young man who wants to make his way up professionally and financially. He also ignites a gleaming undercurrent of cruel mischief to a charismatic King James, a cold exemplar of a leader disinterested in whether he offends or not. 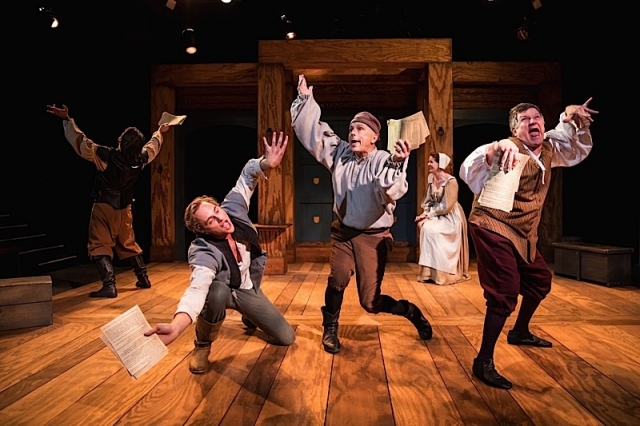 Edwin Strout sparkles in his turn as Coke, a bombastic public interrogator who Garnet trips up deliciously—a reminder of how aggressive rhetorical pomposity can be used as an intimidating weapon against those deemed as enemies of the state. A marvelous Eva Gemlo as Shakespeare’s daughter, Judith, vividly contrasts the forceful male energy that permeates Equivocation. Though this Judith is of her time, she seems contemporary. Cain uses her to challenge what she sees as a strain of nihilism in her father’s writing.  Her wounded feelings over her father’s preference for his dead son Hamnet offers a deep speculation on what may possibly have actually been. Gemlo and Ross are two young actors to keep your eyes on.

There is one problem with the production: Strout and Mentzer are often too loud and have not modulated their voices to the Gremlin acoustic. That aside, A. Emily Heaney’s period costumes, Tony Stoeri’s dramatic lighting, and Steve Kath’s Jacobean Era-style set splendidly support the intentions of this fascinating play.