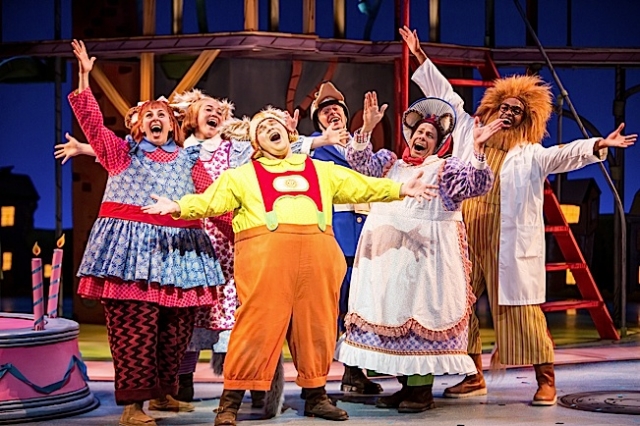 There is a tendency nowadays for many people to not understand and comprehend the interconnectedness of how society works. Some think that the cereal comes from a box in a store and fail to comprehend that the cereal actually originated as seeds in the ground that grew, were harvested, transported, and processed before they were ever in the box. Another example: we often pass by buildings that are still standing and look quite nice after a fire because thankfully the fire department was contacted by phone and then sent a fire truck to put it out. It was then rejuvenated thanks to bricklayers, cement truck workers, painters, etc. Not to mention the people saved by the ambulance and the hospital and medical workers who went on to tend to their healing.

What I love about the spirit of writer Kevin Kling and composer Michael Koerner’s sweet adaptation of Richard Scarry’s classic children’s book, Busytown, is that it not only shows kids the interconnectedness of the work economy that sustains us all, but it also is a potent reminder for us adults who too often lose track of all that people-powered infrastructure that keeps us comfortable, healthy, and civilized.

The various animal characters show us the day to day routines of workaday life with a sense of wonder and discovery. We see the importance of the postal service and a worm in an apple – both go to great lengths to make sure grandma knows about her birthday party! Kasono Mwanza re-assures as Doctor Lion. Meghan Kreidler is humorously uptight and upright as the postal rep whose gender is unconventional. This show should make you feel more appreciation toward fellow persons you see in your own daily routine. Not to mention any animals you come in contact with.

Eric Van Wyk’s set and Loren Shaw’s costumes are delightfully overstated like a child’s picture book. Kling and Koerner’s uplifting script and score along with the lyrics they co-wrote have been directed with cheery openheartedness by Sean Graney.