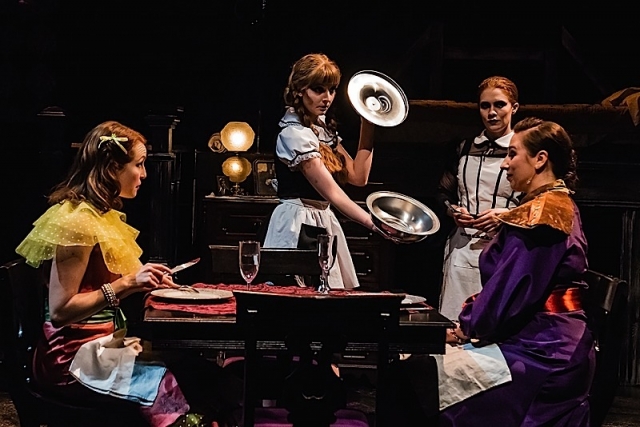 The Papin sisters of France are perhaps the two most notorious live-in housemaids in history. Their brutal 1933 murder of the wife and adult daughter of their employer in Le Mans was the source of legendary gay writer Jean Genet’s esoteric play, The Maids, the most famous work inspired by the crimes. The murderers, redubbed Claire and Solange, are sometimes played by men.

However, playwright Wendy Kesselman’s play, My Sister in this House, 1981 winner of the esteemed Susan Smith Blackburn Prize, is a far clearer and more credible examination of the dynamics surrounding the crime and rates as a major drama of the ’80s decade. However, like Genet’s work, it doesn’t pretend to be an exact historical account of that grisly event: an event which, even now, eludes full interpretation after eight decades-plus. Kesselman changes the names of the victims from mother, Leonie Lancelin, and daughter, Genevieve, to Madame Danzard and Isabelle. The overworked sisters have the same first names but their surname in the play is Lutton.

Kesselman doesn’t settle for simplistic stereotypes of the powerful vs. the oppressed. That element inherently shoots through anyway, and with a vengeance, to be sure. What makes My Sister in this House a challenge is that the actresses and the director must penetrate mysteries of human nature in order to make it emerge with textures rather than coasting on easy sensationalism. And Theatre Pro Rata’s staging at the Crane Theater achieves that. 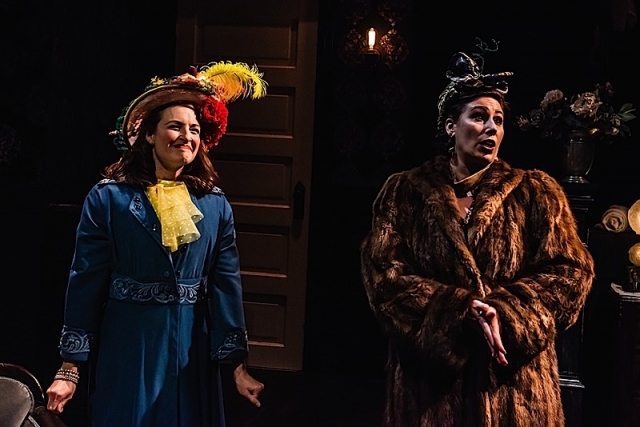 Director Carin Bratlie Wethern has guided her acting quartet with a classical sense of technique one sees on London stages and which was once the standard in American regional theater. Within this (refreshing) sensibility, she has seen to it that the audience registers how the neurotic and petty demands of the lady of the house make their imprint on the sisters. Madame Danzard evokes a frame of mind that harbors an oppressive litany of potential infractions, spoken and unspoken, that the pair feels tethered to. That said, just as we start to demonize Madame, we are made to wonder to what extent the sisters, especially the older Christine, has imagined the actual level of negativity the lady of the house is truly infusing. Might Christine have reached the point of being incapable of distinguishing between real threats and imagined threats? Has she become what’s known as a paranoid personality? Is Madame really weaponizing these arbitrarily stated and unstated expectations? Whatever conclusions one draws, her commanding attitude, nonetheless, tramples on the dignity of both and each suffocates beneath it. 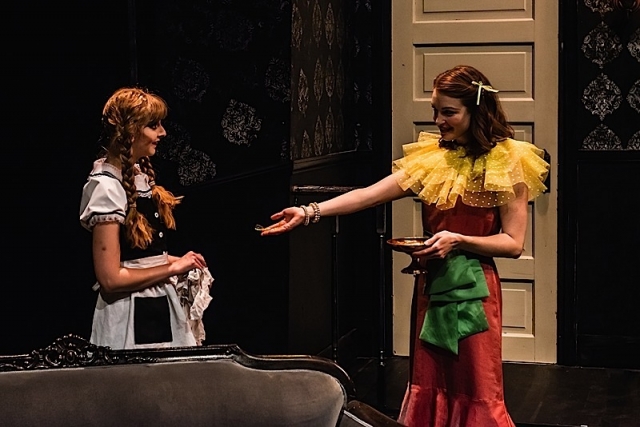 Christine is acutely sensitive to Madame’s power over whether the pair could be thrown onto the streets. Fear of poverty permeates her mind. Before the younger Lea joined her, the perfectionist Madame was quite pleased with Christine. But the younger’s naive vibrancy seems to have triggered a peculiar kind of resentment from Madame. This precipitates an unsettling and fascinating dynamic which the quartet emanates with magnetic interplay. A pink sweater that Lea innocently wears over her official black and white uniform sets Madame into rage. Moreover, she doesn’t wear it during any formal function where one could say she gave off an embarrassingly uncouth image in front of those Madame wanted to impress. Wearing the pink sweater is done in the privacy of the Danzard home unseen by any outsider. Even the stuffiest madame, one would think, wouldn’t react so extremely. This exemplifies the irrational atmosphere the sisters are compelled to live within, but might it also point to a kind of ritual with esoteric codes that only Madame is privy to?

Bratlie Wethern’s superior acting quartet is reminiscent of the brilliantly subtle and nuanced performances you see in the films of Ingmar Bergman, Alfred Hitchcock, Sergei Bondarchuk and Andrei Tarkovsky. As local directors go, Bratlie Wethern has long shown notable interest and insight with plays that reflect history and western culture. One imagines that she and the production’s seasoned dramaturg, Christine ‘Kit’ Gordon, understand film on a similar level as well. The four actresses ingeniously convey minute movements, whether a change in the rhythm of chewing, an overreaction to a dropped object, a relishing of a simple piece of candy, as if they were the most important moment happening on the entire planet at that point in time. Beguiling!

The terrific Katherine Kupiecki emits the toxicity of a middle aged woman who has constructed her entire reality around an utterly militant compulsion to live by a neurotically enshrined code of appearances. Her way of not only controlling her maids, but her daughter Isabelle, is sadistically understated. It’s the understatement, which Kupiecki plays close to the vest, that makes the character all the more mystifying. 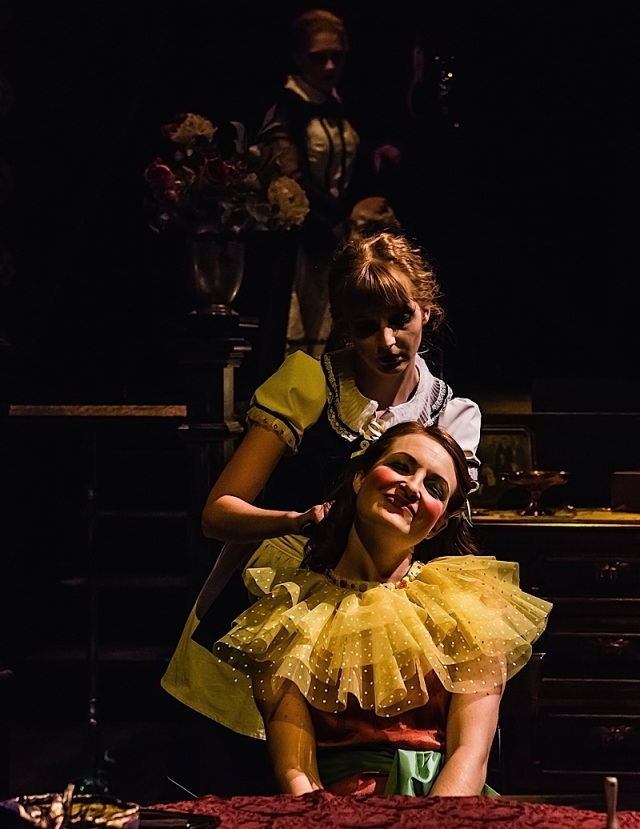 Nicole Goeden, superb as Isabelle in what is a genuinely tragic performance, renders a character who lives in submission to her mother, arguably more than the maids. Any shred of personal autonomy, and even her capacity for kindness has been ground down by her mother.

The sister performances are devastating. Kayla Dvorak Feld creates as crisply unnerved Christine, breathlessly trying to foresee and forestall what might happen. Emphasis on “might”. Kesselman seems to sense that the fear of what might happen is something that rules our lives far too powerfully. Nissa Nordland Morgan’s effervescent Lea is like the conscience of the play, as we measure the restrictiveness the other characters place on themselves and on one another against Lea’s free spirit. These two actresses are intrinsically interconnected. The signs of incestuous attraction are subtle as there’s so often a fine line between nonsexual physical affection and libidinal power. These two navigate that zone brilliantly.

As for the murder scene, it erupts with feverish hysteria and jolts the audience, even though they know it is going to happen. 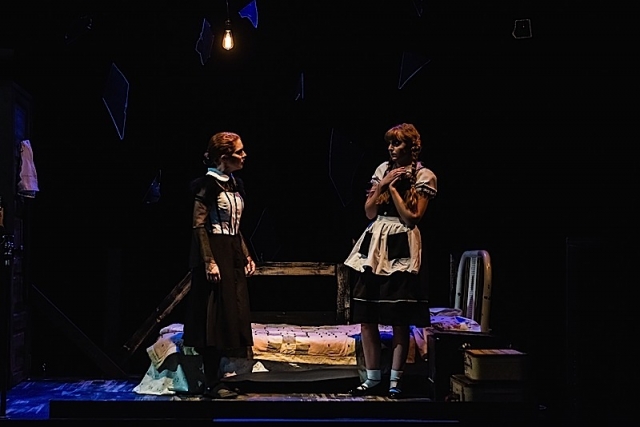 Pro Rata’s production elements, like the acting, are exquisite. Ursula K. Bowden’s set design has a haunted house edge to its look. The sisters’ shared small bedroom sits above the kitchen area stage left with a narrow stairway reaching up toward toward it. Samantha Kuhn Staneart’s costumes suit the era splendidly. Jacob M Davis’s sound design and Jenny Moeller’s props add ambience and detail to the Grand Guignol effect.

The Papin crime was an event which triggered curiosity and concern over two then unmentionable concepts: incest and lesbianism. In Roman Catholic Europe these were generally thought of as cardinal sins and the sisters’ frequent references to nuns in their childhood suggests there well could have been shame, spoken and/or unspoken, and sublimated desire that factored heavily into their personality formation. Indeed, one can imagine the same sex tensions that occur in environments like convents for girls and military schools for boys. It’s hard to get around the film sources of the time. One wonders if the Papin sisters may have seen them. Madchen in Uniform (1931), a feature film about what has been referred to as a statement of “pedagogical eros” in a girls boarding school, still strikes with lesbianic power. Bunuel and Dali’s Un Chien Andalou (1929), a seminal short work of surrealist cinema, graphically depicts the grisly and the erotic and was actually a hit. The former was from Germany. The latter from Spain. Two countries bordering France. What affect might having seen these films have made on the sisters’ minds. It’s just a thought.

The other competing influence in Europe at the time was Marxism and the Danzards epitomize that which is abidingly detested by the Marxist – the Bourgeois. Therefore, as heinous as the Papins’ murders were, there was a ready-made constituency one might say to go in the direction of blaming the murder victims. The sisters were seen by many as the victims of class and dead end abhorrent servitude. As the aforementioned films suggest, there was an appetite for examining  renegade sex and the subconscious at the time. 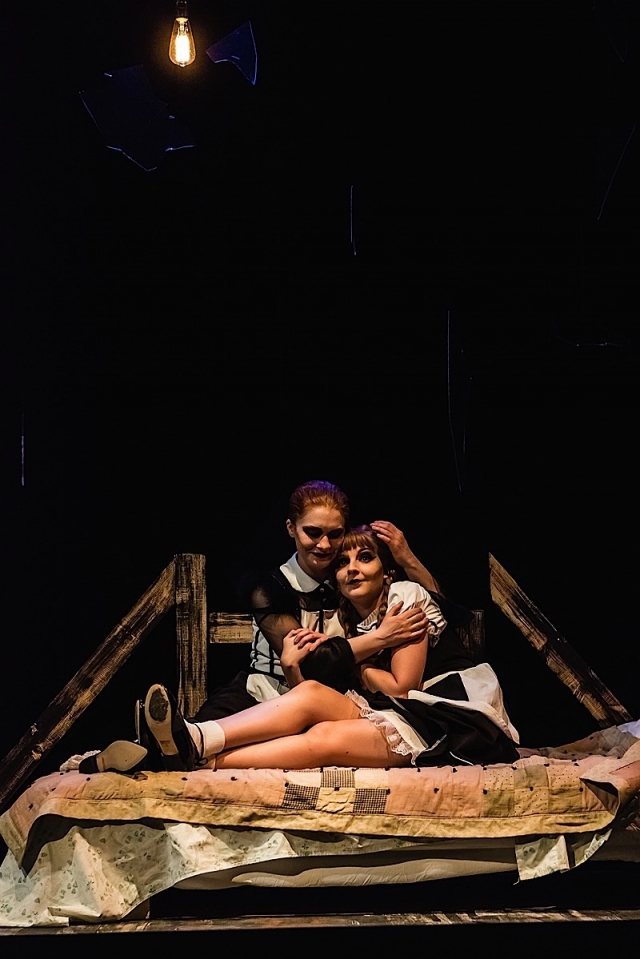 What’s obvious about both the Genet and the Kesselman is the absence of any male characters on stage. Genet shapes a studly convict identity for the husband, probably a vision of his homoerotic/romantic imagination more than who the employer actually was. He never appears onstage and is only talked about. But the sense that Kesselman puts forth is clearly that of a bourgeois, which is definitely truer to the actual reality. The husband/father, Rene Lancelin, was a retired lawyer and apparently a man of local status. As she points out, the sisters actually were reputed to have been thought of as good workers and were regarded with a certain amount of pride by the family.

Kesselman sidesteps the father by saying very little about him. This in and of itself may be a kind of indictment of sorts, with a suggestion that men may be needed to add balance to dynamics ruled by toxic femininity. Only a few brief voiceovers pop up of townsmen with a reductionist view of the sisters as young women. These clearly misogynistic comments only serve to stir their fears and anxieties of the outside world. All this said, the playwright is not being evasive by her women-only space. She creates an hermetically sealed mini-universe of four women and the audience gets to peer into the bubble they exist in. And what a vision it is!

Six years after the homicides, Jean Renoir’s landmark film, Rules of the Game, addressed ugly aspects of France’s class divisions between the World Wars. As with My Sister in this House, such aristocratic vestiges of life before the first war were still firmly, obstinately, yet archaically in place. Both works are uncannily similar in that apprehension. Therefore, one cannot help but wonder as Kesselman’s characters disintegrate, that they are metaphorical of an entire social order headed toward cataclysm at the decade’s end like a runaway train. And God knows, we all know what happened then…