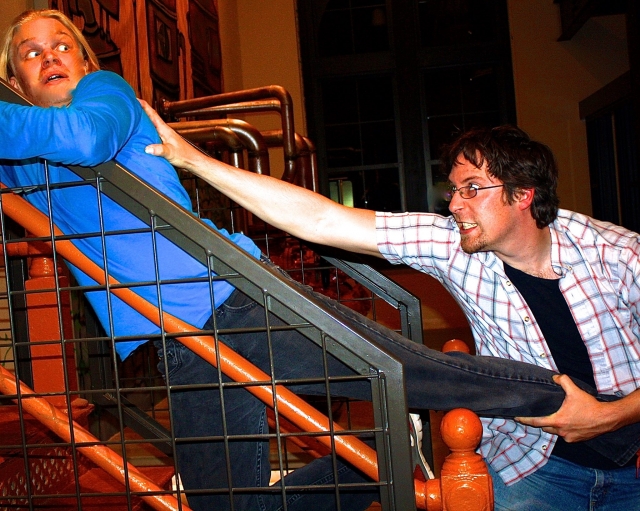 A grisly element dominates Andrew Rosdail’s new comedy Uncle Walt. “Walt” refers to Walt Disney. There’s the Walt Disney whose movies you probably loved as a kid and may still love. But then there’s the Disney who supposedly had a dark side that Tom Hanks would never consider investigating.

Uncle Walt has a fired Disney animator stealing the frozen head of Walt Disney to hold it for ransom. He takes it to the apartment of his slacker brother and homicidal tendencies ensue. James Parker plays the fired Clint. Coletrane T. Johnson plays Ron, the slacker. Mark Hooker, a master of camp comedy, directs for Brazen Theatre.

Hooker shares that “Although this piece is slightly out of character for Brazen Theatre’s usual fare, I found the script by local playwright Andrew Rosdail intruiging, dark, and funny. This story spoke to me as an iconic tale of two brothers pitted against one another, by outside temptations. In the end, they must choose if family is more important than material gain. Much like Sam Shepard’s True West, I find this story fraught with homoerotic overtones, although the two main characters are actually straight brothers.”

Hooker adds “Brazen Theatre’s mission is evolving.  We began only telling stories about gay men. We are strengthening that position as well as branching out to tales of the oppressed, the underdog, the disabled, as well as a smattering of just plain good plays that might or might not have anything to do with the LGBTQ experience yet have universal appeal.”