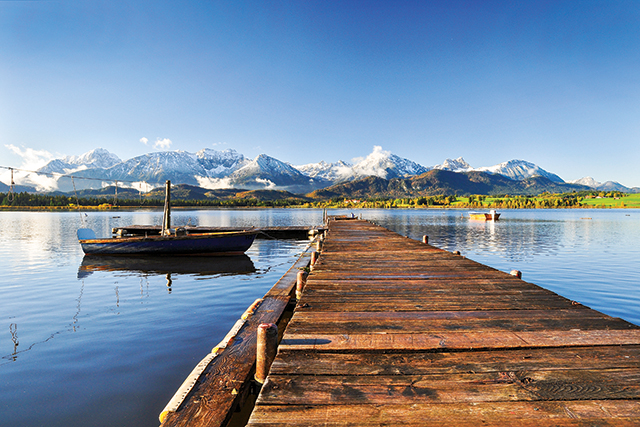 It’s Saturday night in Munich, the party-hearty vortex of Germany, and the Hofbräuhaus beer hall is hopping. Camera-clicking tourists focus on the oompah band as strong-bodied waitresses brandish foot-high steins of beer.

Instead, I’m aiming my camera at the band assembled for May Day in a comfy neighborhood — Harras — unvisited by tourists, consuming a sausage from the brat stand and applauding the tuba tooters lined up to parade through the ‘hood. C’mon along, they beckon. And I do. Munich, the capitol of Bavaria, is that welcoming.

I end up sharing tables in the local tavern, Meindl Eck, celebrating spargel season with a giant platter of that esteemed white asparagus (“our Viagra”), served with potatoes, hollandaise, and gemütlichkeit.

“Bavaria is the Texas of Germany,” declares our guide the next morning: more comfortably off than much of the country, and more conservative. “Law and order!” he bellows as a miscreant crosses an empty street against the light. He’s escorting us to Neuschwanstein, the fairytale castle of Mad King Ludwig, who vowed to out-do Versailles but never spent a single night in the mountaintop castle he’d decorated (every last inch of it) with scenes from Wagner’s operas. Looks like we might have to, though. The line is long, long, long at this most-visited of all German sites. As a loudspeaker blares “507” — that’s our ticket number — our guide reminds us, “Law and order!” 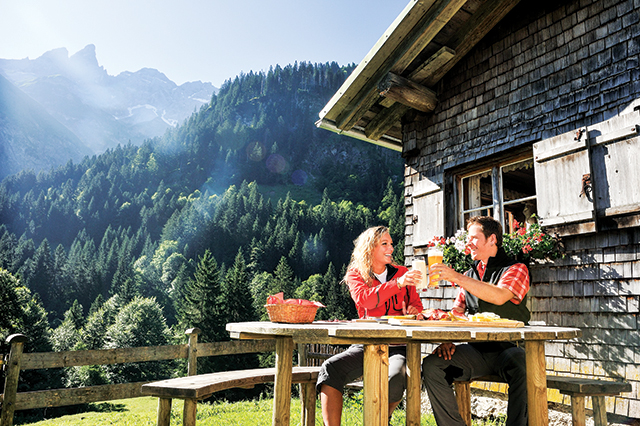 Back in Munich, we admire Nymphenburg, the opulent palace where Ludwig was born, then the showroom for the monarchs of today, BMW (Bavarian Motor Works). Sorry, no gift certificates.

Then I jump on the U-bahn to the Old Town, greatly destroyed by WWII’s bombs but restored as built in the Middle Ages. As the Glockenspiel’s figures revolve on the tower of the New Town Hall of 1867, a golden statue of the Virgin Mary beams down on her namesake Marienplatz, the city’s outdoor living room. I head for the town’s oldest church, the Gothic beauty St. Peter’s, then on to St. Michael, a Renaissance masterpiece of white and gilt housing Ludwig’s tomb, and the nearby Frauenkirche, with its twin onion domes of 1468. The grand finale is the church built by the Asam brothers in 1773 as an eye-rolling, über-the-top homage to Rococo kitsch.

The synagogue is another story — a stone fortress built in 2007 entered through a tunnel inscribed with the names of the city’s murdered Jews connecting to the social center, whose glass walls are inscribed with quotes (“I had no idea,” etc.). Its neighbor, the Munich Museum, unfolds the chilling account of the Nazi’s anti-Semitic crackdown as does the brand-new Documentation Center of the History of the Nazi Party, here in Ground Zero of the movement Hitler ruled: documents and photos of the horror story, “to learn from the darkest chapters of the past.”

The nearby Viktualienmarkt is Munich at its most congenial — a panorama of food stalls from which to fabricate an instant picnic. Or dine across the street at Tian, a cosmo vegetarian outpost whose menu includes fennel soup with pumpkin and orange; pasta with carrots, snow peas and Parmesan foam; and a crème brûlée worth hours on the treadmill. To celebrate your inner German, head to the venerable Augustiner-Keller to load up on beer-cellar classics, including cannonball-sized pigs’ knuckle with kraut and potato dumpling, schnitzels galore, and duck with red cabbage. Pig out further on a divine dessert called kaiserschmarren (Kaiser’s foolishness) composed of crêpes torn up and reassembled with nuts and raisins — divinely inspired folly. 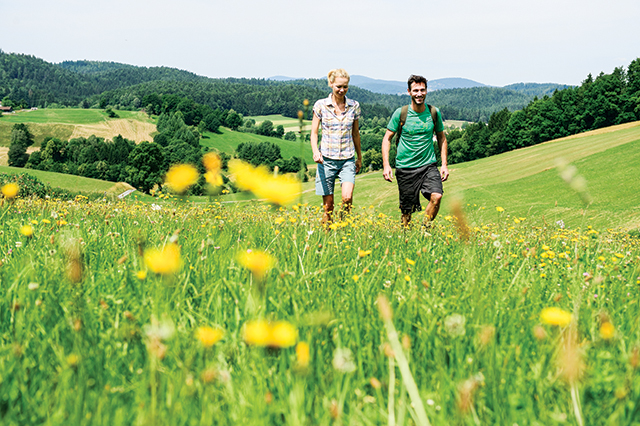 But Texas isn’t all about Houston, and Bavaria is more, much more, than Munich. Time to head for the outback: the towns untouched — almost — since Medieval times. The stuff of travel posters, and your dreams.

The Bavarian Alps still sport a spritz of snow. Mittenwald lures us into a morning’s hike through the forest to an ice-blue lake, then lunch of ox and spätzle, as compatible as PB&J. We also got a bonus peek into the town’s unlikely claim to fame, the Violin Museum. For three centuries and ten generations, Mittenwald’s artisans (13 today) have supplied orchestras worldwide with handmade instruments as prized as a Stradivarius. Got $2,000 lying around? Place your order and craftsmen, like Florian in his lederhosen, will follow in the footsteps of fabled Matthias Klotz, whose violin of 1685 is the museum’s prize.

Neighboring Garmisch-Partenkirchen celebrates its Olympics ski jumps, along with Garmisch’s posh tourist shops and Partenkirchen’s cache of 18th-century religious murals brightening every façade. We escape to the posh Hotel Elmoe, hidden in a national forest, for dinner deluxe: salmon tartare, guinea fowl, coconut crème brûlée. It’s far from undiscovered, however. On May 22 the G7 held its meeting here.

Bavaria is deeply religious, and so the Church of Wies arising from beyond the beyond enroute to Augsburg is either a mirage or a miracle. We alight to find out. Why this Baroque explosion blooming in the fields? “Is it beautiful? Or, too much?” a guide invokes our thoughts. Then she begins the story. The church was built after a dark hour for Bavaria: the wars, plague, and starvation of 1713. A statue of the Scourged Jesus, thought too painful to admire, was banished. But when a devout farm wife came upon it and it wept, miracles began to happen. It now rests behind the altar of the church the peasants built to honor it.

Augsburg is older still, founded by the Romans. But it boasts one of the first social-service projects of the world — the Fuggerai. It’s an almshouse community built by wealthy Jakob Fugger, who brought the Italian Renaissance to Germany. His economic success is trumpeted in the town’s museum. Tour the Fuggerai’s comfy apartments, allotted to pious paupers for 88 cents a year (then and now), which Mozart’s grandfather helped build. Tour, also, its bomb shelter that spared thousands during WWII. 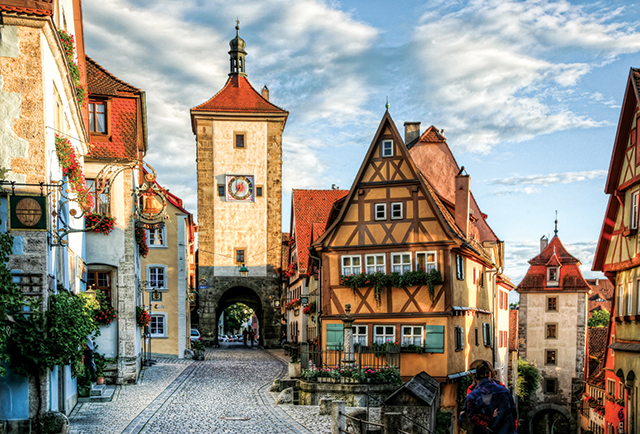 Jews paid for and built the city wall, but in 1440 were expelled. Martin Luther didn’t fare much better when arguing his case here. Later, native playwright Berthold Brecht opined, “The best thing about Augsburg is the train to Munich.”

Think Bavarians are fiercely proud? Ain’t seen nothing till you dig deeper into its northern reaches. “We’re Franconians first, then Bavarian…and then German,” states Johann, a longtime booster of its pinnacle, romantic Rothenburg. Unlike elsewhere we’ve trekked, this heart-stealing medieval city was largely spared from bombing, thanks to a U.S. military officer who’d heard tell of its unique historic treasures.

I’m off and running to their epicenter, St. Jakob Cathedral, to swoon before the deeply wood-carved Holy Blood altar, created by revered Tilman Riemenschneider in 1520. Add in a magnificently painted High Altar and pungent stained-glass windows, and it doesn’t get better than this. The nearby Franconian Church — the city’s oldest, from 1285 — showcases the sculpted tombstone likenesses of armored knights and another Riemenschneider altar. The City Museum has gathered more precious artworks: chubby cherubs, an eerie Judas, and the lifesize figures representing the Seven Virtues and Seven Vices (Avarice clutches his purse), and the recreated Jewish ghetto of 1520, including a cache of gravestones from the 1298 pogrom.

Wait, there’s more! The Medieval Crime Museum displays painful ways to pay for your misdeeds, and dispels some misconceptions. “Torture,” explains Martin, its curator, “was not punishment; it was used only to gain evidence” — as in the rack, the Iron Maiden, and other frightening devices. Public humiliation served as chastisement for lesser missteps, punished by the pillory, neck violins, shame masks, and cheater’s chair on display.

Mercifully, we move from the executioner’s sword to a wine cellar for a tasting of the Franconia’s elegant whites. “Was this a good year?” I innocently inquire. “We only have good years!” responds winemaker Albert Thürauf at Weingut Glocke. “Rather than high alcohol, we prefer flavor. A human can only sleep well above a full wine cellar,” he pronounces. 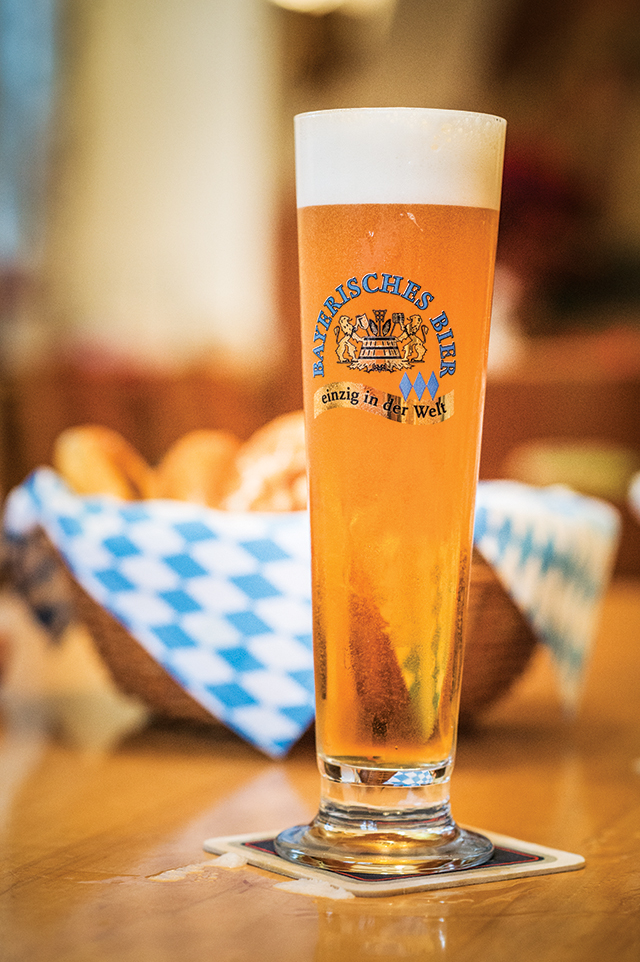 In Würzburg, pride of place goes to the ultra-Rococo Residenz Palace, where Tiepolo was lured from Italy to paint “The Four Continents,” representing the New World with an Indian riding a crocodile. He also embellished the elegant White Room, festooned with plaster lace.

Leap ahead half a millennium to Würzburg’s Museum im Kulturspricher, showcasing Concrete Art. No, not the lawn gnomes I’d expected, rather, concrete as in the Abstract movement: geometric paintings from 23 European countries, explains guide Rudi Held, of its heyday in the ’20s and, later, ’50s. All that concrete left us just enough time for one last spargelfest at Restaurant Backöfele: in soup, on salads, paired with brats, schnitzel, bathed in red wine sauce, what have you.