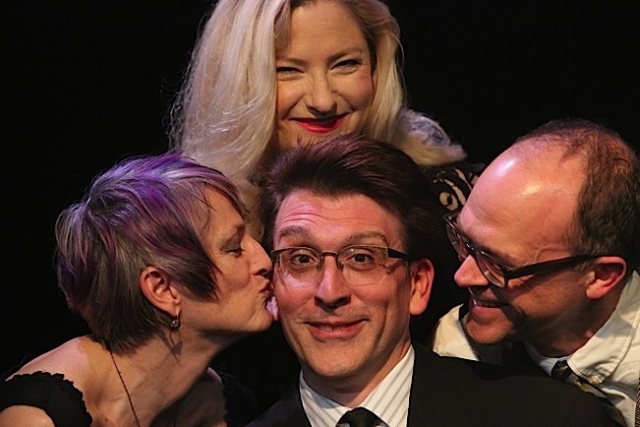 If you don’t recall ever having heard the songs of Belgian singer-songwriter Jacque Brel (1929-1978), now’s the time to do yourself a favor and re-acquaint yourself, or if you don’t know of him, discover one of the most powerful musical talents of the 20th century. Brel’s poetic, folk-like tunes rip right into the human heart. It’s like “instant vulnerability”. Indeed, only the greatest artists have such an ineffable power. But that said, his songs can also be mischievously witty with satirical edges.

If I’ve roused your curiosity, take heart because you are in for a treat. Some topnotch Twin Cities vocalists are presenting a revue of his songs, but it’s not the usual Jacques Brel is Alive and Well and Living in Paris. Rather it’s Jacques Brel: When We Only Have Love at the Open Eye Figure Theatre.

Vocalist Bradley Greenwald gives some background: “Last year we all put together a program on Bertolt Brecht and Kurt Weill and it was so successful, we decided to dig into Jacques Brel this year.  Part “travelogue”, mostly concert, the program looks at his life and career and influence as a songwriter. One of the great surprises for me was discovering the original Brel songs behind the English-language covers most people know -“If You Go Away”, “Seasons in the Sun”- and the complicated and sometimes acerbic wisdom that got washed away by mainstream American pop song renditions.  We did a draft of the program for the St. Paul Public Libraries in March and the response was terrific.”

Greenwald’s distinguished co-performers are Diana Grasselli, Prudence Johnson, Dan Chouinard, Michelle Kinney, and Tim Sparks. This group is sure to do Brel justice. You can bet they’ll appreciate his emotional subtleties as well as his bold power.