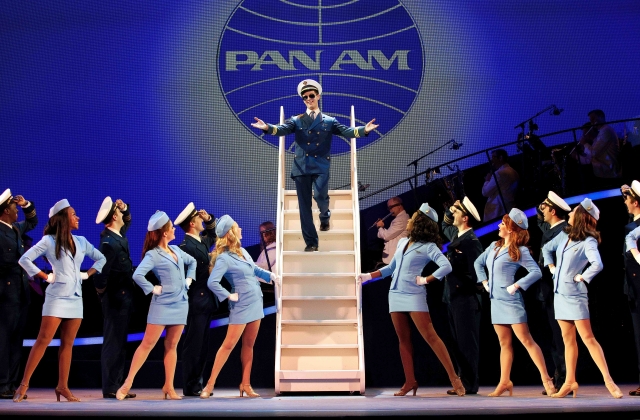 Boyish and elegant may seem like at odds in describing the strength of a musical, but it’s the boyish elegance of Stephen Anthony who plays a 16 year old who dons different identities ranging from airline co-pilot to doctor that makes for a dazzling time at the Orpheum. You may recall the ’02 Spielberg film with Leonardo DiCaprio based on the real life events of Frank Abagnale, Jr. In hopes of keeping his parents’ failing marriage together and improve their finances he pretended to be men in lucrative professions. For those of us not predisposed to criminality, it’s a stimulating piece about the ease and the power of human changeability. It’s also a touching commentary on the anguish that divorce foists on older children.

The 2010 Tony-nominated Best Musical version directed by Jack O’Brien infuses the story with a Swingin’ ’60s concept that benefits beautifully from Bob Bonniol’s video system and content design and a scenic design by David Rockwell that has an upstage slope the length of the stage with an orchestra that brings to mind Nelson Riddle. 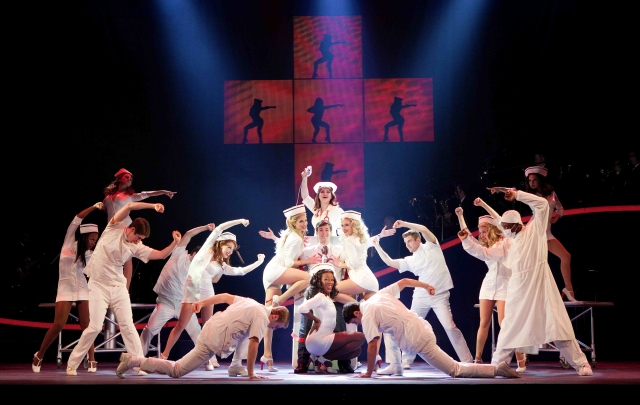 Jerry Mitchell’s choreography and William Ivey Long’s costumes give us ‘the other ’60s’, not the hippies, the free love crowd, and American GI’s in Vietnam, but the suit and tie guys in the FBI and an ensemble of female dancers that clearly evoke the Playboy Bunny image. This is really my only qualm with the production. I have nothing against beautiful sexy women but because there are no corresponding images that accentuate the male body equally it registers with the exploitative sexism of the Sean Connery era of the James Bond series. You can argue back that ‘that’s the era’, but that’s no excuse. Just show the guys too. Men wore swimsuits then and underwear. And what’s more, for God’s sake, the script was written by Terrence McNally, who gave us Love! Valor! Compassion!, Broadway’s great nude male play. Tisk Tisk Terrence. As a gay man you should know better. 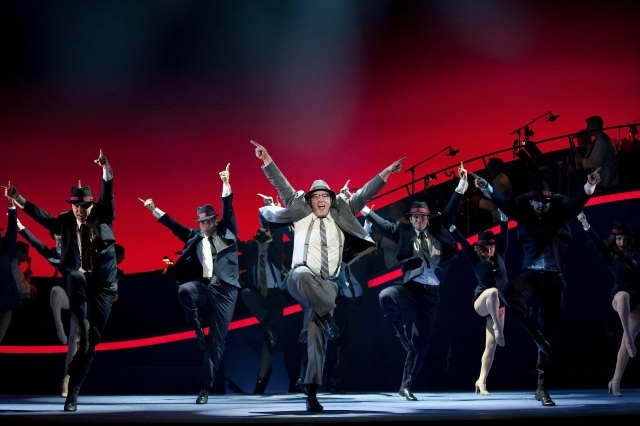 Marc Shaiman’s music and Scott Wittman and Shaiman’s lyrics capture the ’60s lounge act style and are marvelously delivered by a terrific cast. Dominic Fortuna as Abagnale, Sr. and Merritt David Janes as the FBI human bloodhound, Carl Hanratty, are splendid as father figure types who may make you want to cuddle up next to them and call them ‘Daddy’.