A Francophile’s dilemma: Where to find the ideal trifecta of food, wine, and culture? (Oh, and shopping.) Easy. Bordeaux.

You know the wine (worship it, in fact). So, come to the source, and get to know the city, too. It’s as easy on the eyes as it is on the palate, and only two hours and change south of Paris on the speedy TGV train.

The Romans got here first—and planted vines, in fact. They sailed here up the Garonne River, and Bordeaux has served as an important port city ever since. On the remains of a Roman temple stands a temple of another sort today: the Opera House of 1780, its centuries of grime newly-scrubbed, as are all the city’s buildings. Across the plaza, where trams silently slither, is the grand Regent Hotel, composed of five town houses of the same era, whose restaurant glimmers with a new Michelin star. 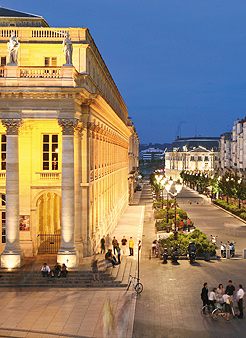 Ut anchors Ste. Catherine Street, an avenue of shopping frenzy—a solid wall of people the day the twice-annual sales began, when boutiques cut prices by 50 to 70 percent, meaning, yes, you can snatch that snazzy manbag and those designer boots at prices rivaling Walmart’s.

Christine, our guide on a walking tour of the historic district, declares. “Bon! Alors!” It’s a city, she says, proud of homeboys she calls the Three Ms: Montaigne, Montesquieu, and Mauriac. (The fourth, Moliere, merely stopped by in 1554.) Above cobbled lanes, dainty wrought-iron balconies cling to the fancy facades of Bordeaux’s heyday—the 1700s—leading to the UNESCO-preserved Cathedral Square.

Bon! Alors! The dominating church itself, and its stand-alone bell tower, begun in 1034, boasts the formidable flying buttresses of its 13th-to-15th-Century rehabs. Here, in its chapel, Eleanor of Aquitaine married Louis VII of France (before her later hubby, Henry II of England).

At the neighboring Hotel de Ville (still Town Hall today), Napoleon held office. During the French Revolution dashing the nobles, it served as a lowly warehouse. Down the street, the Museum of Decorative Arts occupies a sumptuous 18th-Century mansion showcasing the pretty furnishings of those doomed aristocrats The far-less-elegant Museum of the Resistance bristles with spirit, if not English captions, as it traces the exodus to concentration camps.

On the grand waterfront promenade, where concerts and light shows draw crowds, follow those incessant joggers to the Merchant District, where a warehouse, this time, has been restored as the mind-blowing Museum of Contemporary Art. Bonus: a buzzing restaurant serving local specialties like foie gras, oysters, mussels with frites, and a hearty Croque Monsieur sandwich. Plus, the you-know-what wine of the region, of course.

Speaking of wine: Sign on for a two-hour course (25 euros) at l’Ecole du Vin (which I dubbed Wine School for Dummies) to gain insight into why Bordeaux tastes so lovely (and which Bordeaux crus taste the loveliest of all). To nix marketing shenanigans, its production is regulated strictly by law: six allowable white grapes and six allowable red grapes, of which the glorious Cabernet Sauvignon is undisputed king.

The region boasts 8,000 wineries—most, miniscule—which have nature to thank for producing the world’s most esteemed bottles: cool ocean air, ideal terroir (soil), and the ability (again, by law) to blend the six varietals. We learned that those on the river’s left bank produce stronger, smokier, “broodier” wines, rich with the perfume of black fruit.

Next, we sniff vials to try our skill at identifying aromas often found in wine: licorice, smoky oak, violets, cherries, what have you. Then, time to taste: a left-bank red to compare with a right-bank red, a white, and a sweet wine, perfect for foie gras. And, what a coincidence: foie gras, truffles, and walnuts are the regional specialties, for which we thank our lucky stars at dinner.

Dinner divine, right in our home, the Regent: Save your pennies for a live-only-once splurge in its Michelin-blessed restaurant. Here, a memorable five-course dinner costs the best 120 euros you probably ever will spend: prawns with caviar atop Belgian waffle; scallops with asparagus and smoked quail egg on greens; king crab in a coconut emulsion with those famous truffles; a fromagerie’s worth of local cheeses; and, finally, a dream dessert fashioned of raspberries, olives, cookies, a Szechuan salty mousse, and balsamic ice cream (proving you don’t gain that star for nothing). Or, simply go for its famed lobster, with a tableside show in a silver press (25 euros).

Across the plaza, under the twinkling chandeliers of the Opera Café, lunch on cheesy cream puffs, braised duck on mashed potatoes, or veal blanquette, then profiteroles or tarte tatin (19 euros total). Quel deal!

Go West
(“all pleasures are permitted” in this cool, trendy club)

Le Codebar
(cruising with a slice of drag)