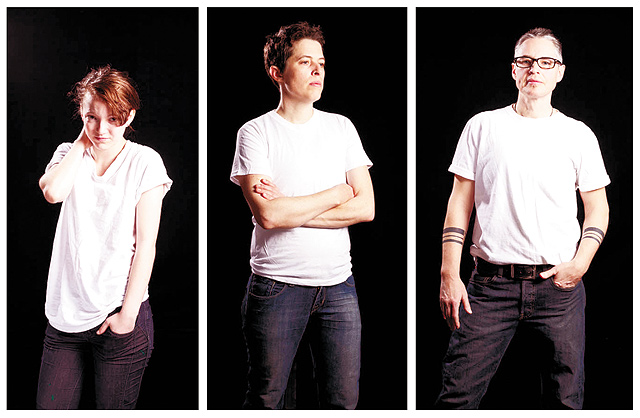 Few adults, much less children, had any vocabulary in the 1950s to express the concept of being born into the ‘wrong’ gender. Open discussion about even basic heterosexuality was generally deemed distasteful, if not fully immoral, much less discussion about anything dealing with homosexuality or transsexuality. (Bear in mind, that the term ‘transgender’ itself, didn’t come into broad usage until the 1990s.) In the 1950s homosexuality and transsexuality, if talked about at all, were likely to be unconsciously/ignorantly lumped into the same category, even by enlightened people. Therefore, both adolescents cannot be anything but unclear about what’s going on between and within themselves.

By 1975, only a few years after homosexuality has been officially declassified as a mental illness, discussion finally spread its wings a bit. But trans understandings were still in a kind of post-infancy. Therefore, in the second short play, Dresses, vocabulary is still inadequate for feelings between the same protagonist, Lorraine (Heather Spear), and her mother (Muriel Bonertz). Lorraine aggressively resists her mother’s push to have her wear a dress to a cousin’s wedding.

Bonertz is the very picture of a woman of her generation at sea in trying to understand the transformations and changing attitudes of the Sexual Revolution. She’s a marvelous blend of delicacy and steel. Spear astutely and viscerally captures that tipping point where confusion gives way to righteous anger. The chemistry between the two is stunning.

In the final play, Changes, set in the 1990s, Lorraine has transitioned into Laurence (Chris Little). Mother has died and Laurence challenges his father’s rigidity and insensitivity. Dann Petersonn is terrific as a man who gets knocked over by history, or as Boatner might put it, changes in time. Little is beguilingly masculine but plays the role too often at a hostile emotional pitch. Nonetheless, Changes compels and provokes thought, rounding out a very satisfying and groundbreaking theatrical experience.