Each year the Minnesota Magazine Publishing Association (MMPA) presents its Excellence Awards, recognizing outstanding publishing achievements. The awards include dozens of categories in the areas of editorial, design, marketing, digital publishing, and overall excellence. All entries for this year’s awards have a cover date between July 1, 2012, and June 30, 2013. Winners were announced at the annual awards gala held this year on November 7. Lavender is proud to present its eight MMPA Excellence Award winners this year.

“Skirting the Issues” by Ellen Krug
For Ellen Krug, her Lavender column “Skirting the Issues” is just one avenue to share a point of view. Between her winning column with Lavender, a monthly column for an Iowa LGBT publication, and a book, Krug has published nearly 200,000 words since early 2010. “This is the first time any of my writing has received professional recognition, and thus, that makes the award extra special,” says Krug, whose intention with her column is to demonstrate that transgender people really are like everyone else. “My goal is to simply be a writer–hopefully a fairly good one–who happens to be a transwoman, who writes about how she interacts with the world.” 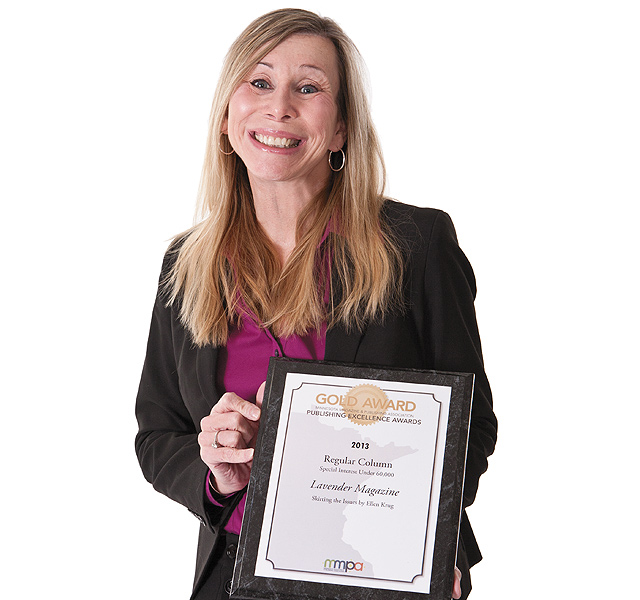 “Slice” by Joy Summers
Each issue, Joy Summers brings to readers whatever is new and fresh in the world of food in her column, “Slice.” Her commitment to bring readers along on her culinary journey earned her column the MMPA bronze award in the “Regular Column” category for the second year in a row. Prior to being notified, Summers had been under the impression that only one piece had been submitted for consideration, not her entire column. “I’m proud and humbled to have been recognized,” Summers says. “I’m proud of my time with Lavender. The award is just gravy on a mountain of goodness.” 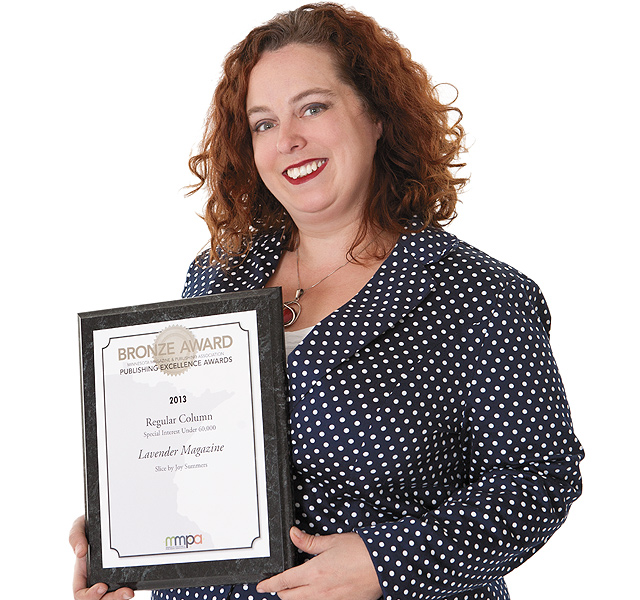 “Senior Living: Aging with Dignity, Aging with Care” by Kathleen Watson
Issue 457
November 29, 2012
“I am very interested in the country’s current conversation about aging,” Watson says. “My goal was to help our GLBT community become more aware of the assistance options available in the Twin Cities. All people deserve to be treated with dignity, and GLBT people deserve to be respected and properly cared for in their later years.” Writing this piece allowed Watson to share her passion and focus her attention on what she called “a valuable group within our community.” 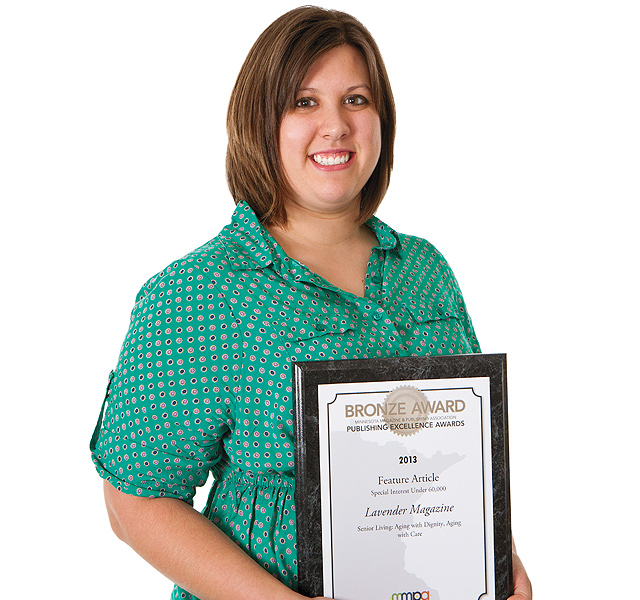 GOLD – From the Editor

“Of Empathy and Our Future” by Andy Lien
Issue 469
May 16, 2013
At the height of Minnesota’s fight for marriage equality, many people in the GLBT and ally community looked to Lavender to take a stand. During this period, Andy Lien’s letters from the editor often summed up and tried to move points forward in the community. “As the person who pulls together content, it was a big boost to my self-esteem to be awarded for content that I penned,” Lien says. “To be recognized for the piece I wrote about empathy toward the end of the fight is a particularly satisfying way to close that era of challenges and triumphs.” 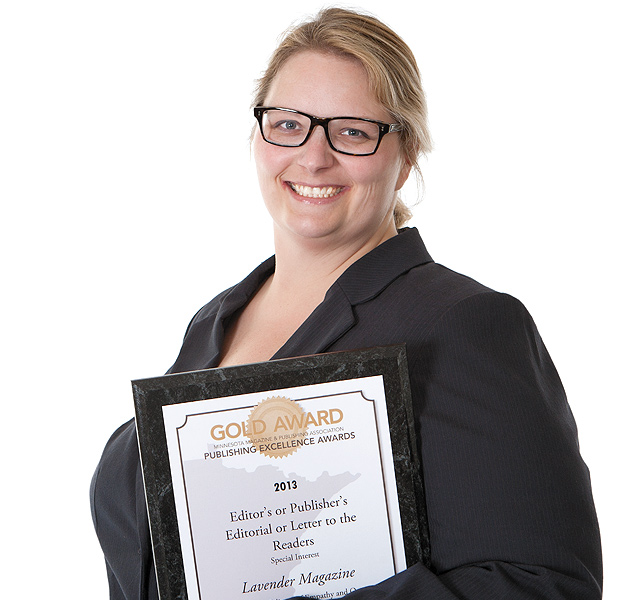 “2012 Organization of the Year: Minnesotans United for All Families” by Andy Lien
Issue 458
December 13, 2012
Lavender’s coverage of the fight against Minnesota’s marriage amendment last year was around-the-clock. Being that the people of Minnesota were the ones with the power to decide the fate of that amendment, Lavender’s staff strived to cover as much of the fight as possible because of the direct effect that Lavender could have in the campaign. Andy Lien’s profile of the organization that played a massive role in that battle, won a silver MMPA award. Lien says, “To win an award for profiling Minnesotans United for All Families and the victory of the defeat was the culmination of the Lavender staff’s attention and dedication to the issue and our photography that documented the campaign from start to finish.” 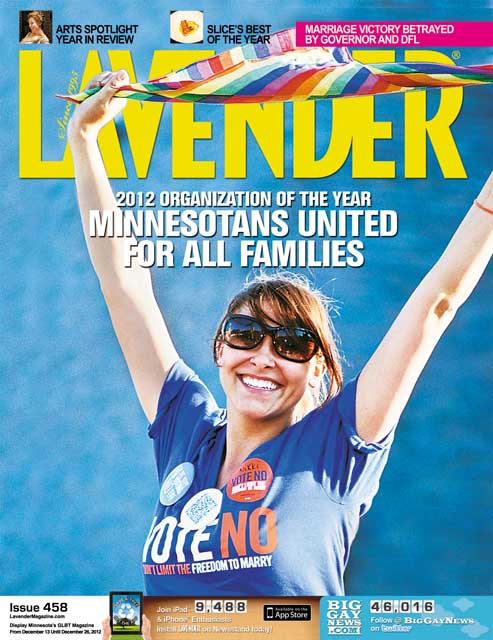 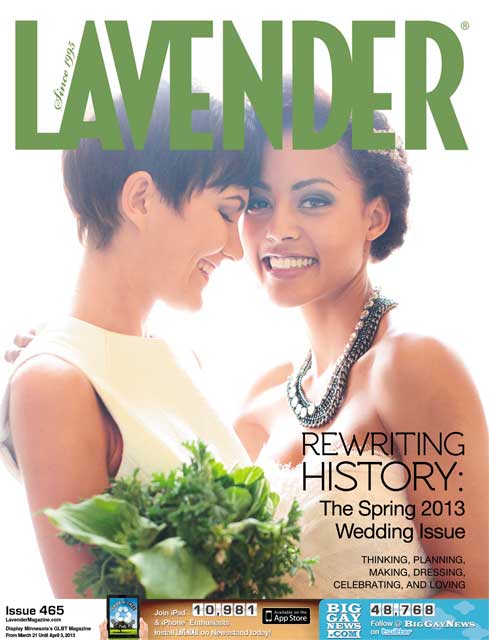 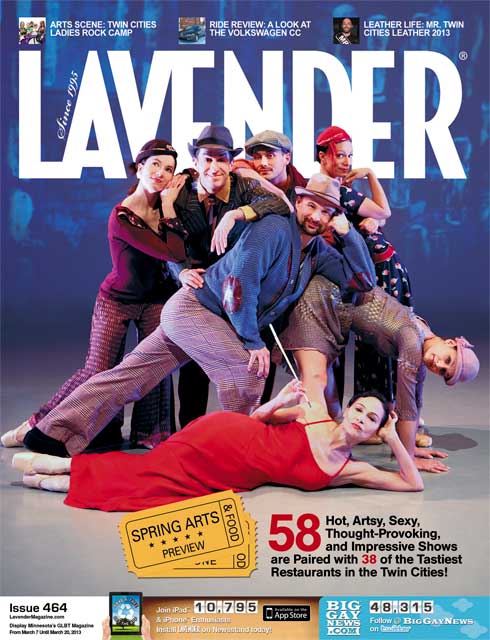 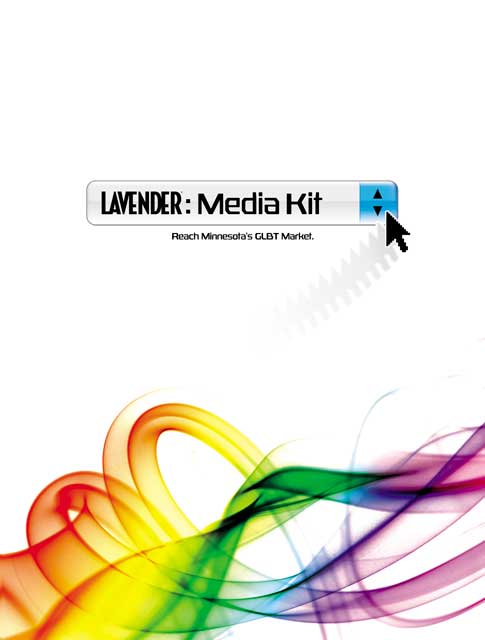