Best Comedy Ever by a Gay Man, “The Skin of Our Teeth”, Gloriously Realized by Girl Friday 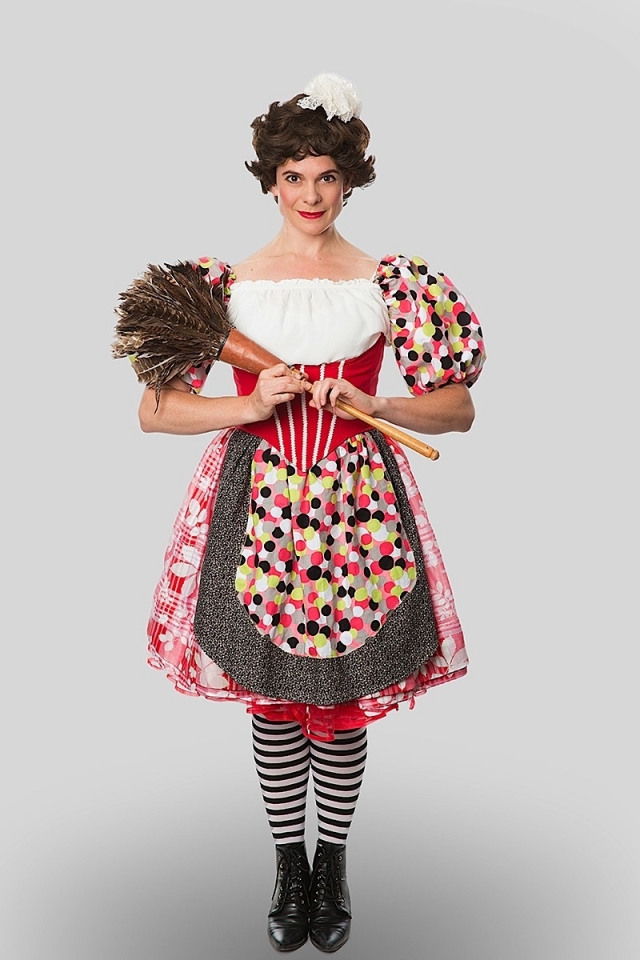 Author Thornton Wilder (1897-1975) is a paradox wrapped in a mystery. He was aware of the gay subculture of his time and said to have been a lover of men on the down-low. Nonetheless, the three time Pulitzer Prize-winner has long been stigmatized as sentimental and a conservative fuddy-duddy. However, genius often fails to fall into tight categories. And Wilder has universal appeal and relevance for good reasons. Paradoxically, the warmth of his humor and his valuation of basic family relationships are not transgressive enough for avant-garde ideologues. Yet his 1943 Pulitzer-winner, The Skin of Our Teeth, beckons the postwar rise of one of the most radical movements in theater history, Theater of the Absurd. Wilder predates the iconic works by Sartre, Beckett, and Ionesco typically attributed to that genre and goes even further in throwing rules out the window than his 1938 Pulitzer-winner, Our Town.

With The Skin of Our Teeth the playwright is undeniably disrupting the very structure of how a play is written and presented in a comedic feast of incongruities ranging from a suburban household with dinosaurs outside seeking refuge to a New Jersey convention of The Ancient and Honorable Order of Mammals, Subdivision Humans to the rehearsal process itself as imagined by Wilder 75 years ago. What some call the Great American Comedy and the greatest comedy ever written by a gay man, has been directed with scenic design through the probing and enthralling vision of Joel Sass for Girl Friday Productions on stage at Park Square Theatre.

The Skin of Our Teeth has three acts that span millennia while including aspects of modern life and characters throughout. Act One is set in the Ice Age with dinosaurs and human refugees, shivering with cold, outside the Antrobus family’s 20th century “Home Sweet Home”. Act Two has the Antrobus family in cultural warfare with the decadence of Atlantic City. Act Three is back at the family home, now a war zone, in devastated ruin.

As literally timeless as the play is, the Antrobus family members and their maid, Sabina, all appear pretty much the same chronological age from start to finish. Despite that, they reveal significant personality aspects and notable shifts in consciousness that one would typically attribute a human being who has matured over a standard life span. Girl Friday Productions’ cast at Park Square delivers those shifts to transcendent effect. Sass’s entire joyous team offers The Skin of Our Teeth up as not only hilarious, but as an uplift of the soul.

John Middleton, Kirby Bennett, and Alayne Hopkins played the very same Wilder roles in years past, but as any role stored in the psyche of any actor, it goes into subconscious hiding until rebidden. That incubation period has reaped benefits to rich results in performances that live into the archetypes as written.

Middleton’s portrayal of the innovative and sometimes gullible Mr. Antrobus brings forth a marvelous mix of masculine verve and male fragility crackling from beneath the surface at pivotal points. Kirby Bennett’s Mrs. Antrobus is simply superb. She hews to the writing which unabashedly exalts traditional marriage and motherhood as crucial in not only maintaining civility, but civilization itself. Some may find these complementary relationships old-fashioned but Wilder was a wise gay man who saw the Big Picture where “every good and excellent thing in the world lives moment by moment on the razor-edge of danger and must be fought for.” And no play is a bigger and more urgent picture than this.

Adult actress Kathryn Fumie has the challenging task of pulling off playing a girl, Gladys Antrobus, even though she is actually a woman. Happily, Fumie not only delights but she endears with some very touching moments. A visceral Neal Skoy, also an adult actor, succeeds as well as older brother Henry, a.k.a. Cain. Biblical allusions abound throughout The Skin of Our Teeth. Henry is Wilder’s archetype of the proverbially impetuous young man whose violent aggression overrules his moral compass. Because of the play’s cyclically transhistorical (and prehistorical) span, we wonder if he is actually an enduring mystical embodiment of the son of Adam and Eve, eternally infamous for the murder of his brother Abel with a stone in the Book of Genesis.

In the scenes where Henry, Sabina, and Mr. Antrobus meet back up after a catastrophic unnamed war, Skoy, Hopkins, and Middleton elicit an artfully dangerous acting quality that takes the breath away. We’re talking “edge of your seat”. Sass and company mine the existential void with despairing truth in a way that Jean-Paul Sartre would achieve a few years later in No Exit and which toward the end of the next decade, Edward Albee would harness in The Zoo Story. So much after The Skin of Our Teeth stands on its shoulders. 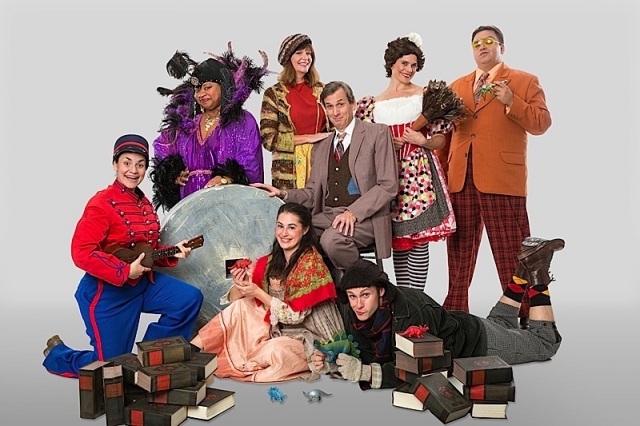 In glorious contrast, joy and hope ultimately take root in this comedic mosaic that runs the gamut. Sass’s ensemble glistens with numerous supporting and minor role performances, every single one of which is a gem in itself. Dana Lee Thompson deliciously sears into the numb consciences of the Boardwalk pleasure-seekers with saucy style and droll assurance as the Fortune Teller.

An impressive James Ramlet brings an undercurrent of patriarchal certainty and stability to the role of majestic Judge Moses. This points to the paradox of Wilder which puzzles identitarian queer and “allied” activists in their attempts to deconstruct him. Wilder is to be rejected for his various conservative thought crime, however, not all his thoughts are necessarily conservative. As with Shakespeare, there are those who will reject him simply because of the biblical influence apparent in parts.

Others see Wilder as someone to be rehabilitated—an effort sometimes made by directors and dramaturgs who add contemporary references. The Guthrie Theater’s beguiling 1991 revival directed by Robert Woodruff added references to Madonna and other contemporaries of the time. (Two of its best aspects, done in the Wilderean spirit however, were the current Guthrie Artistic Director Joseph Haj in a fine performance as Henry along with Brenda Wehle as Mrs. Antrobus).

The playwright’s detractors resent that Wilder cannot be compartmentalized. He is still mistakenly stereotyped as mawkish, just as he was by many in his hey-day. Even remarkable minds like Dwight Macdonald failed to discern the layers of Wilder.

We now know that Wilder was closeted, as unlike two of his younger master playwright contemporaries, Jean Genet and Tennessee Williams, Wilder was not out. It should be recalled that gays such as Wilder and another contemporary, Englishman Noel Coward, were haunted by the dismal end of Oscar Wilde, who paid a dreadful cost for his outspokenness as a gay man at the end of previous century, dying broke and of meningitis in 1900. However, closet cases were and still are stereotyped as cowardly and lacking in the enlightenment that coming out allegedly bestows upon the “out”. Of course, the notion that someone who has a hidden life is a bad apple ipso facto is a foolish, if not a potentially reckless, assumption. The unforgiving activist demands total fealty to the cause and those who fall short of it even if they were at the height of a distinguished career decades before Stonewall. Even after they’re dead. And even if their contribution to humankind was exceptional.

Moreover, such variety of experience may well have been the fount of how Wilder wrote with such an extraordinary grasp of deep psychology and a sweeping historical overview of the collective human unconscious. It is within such an apprehension that Sass, either wittingly or unwittingly, has so ingeniously staged this dauntingly difficult play.

Lesser directors will cut corners of The Skin of Our Teeth or fail to discern the subtleties of its epic sweep, thinking that simply riding the wave of that sweep will take care of all the complexity. Sass, however, addresses intricately one of the most multiplex scripts ever written. The director of this play must make several distinctions. Humans must interact with dinosaurs. Mrs. Antrobus’s seriously conservative speech on family unity is contrasted with raucous extravagance in a casino mecca. The need for sexual reserve mustn’t turn into a judgement against human sensuality. Interpersonal interactions contain a mixture of classic family dynamics and philosophy. In this production the many biblical motifs are vividly understood and so expressed. Sass has meticulously delineated all the details, infusing them with intensely believable characterizations seamlessly executed so that we are swept into another dimension. This is theater at its best. Enormously entertaining and voluptuously intelligent.

Girl Friday’s production elements are luscious. Sass’s set re-creates the home, the Boardwalk, and the rubble aspect of war, to pictorial perfection in a way that accommodates the actors’ physical actions and scenes of numerous bit players maneuvering as they escape an oncoming wall of ice and a flood that echoes that which saved Noah and his family on the ark.

For those who have tracked Sass’s development since the 1990s, it’s impossible to not see uncanny similarities between his style and that of Guthrie Artistic Director Garland Wright (deceased 1998), who served in that capacity from 1986 to 1994. Wright was renowned for his visual gifts, just as Sass came quickly to be known in the ’90s for the same reason for his Mary Worth Theatre productions. As with Wright, actor subtlety in Sass productions took a little bit of time to catch up with the visual power. But when they did, it was truly wonderful.

performances from his actors. With Girl Friday’s The Skin of Our Teeth we witness a director and designer who has evolved triumphantly.