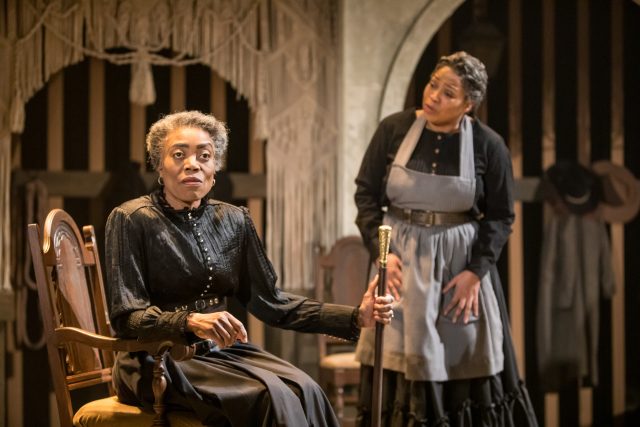 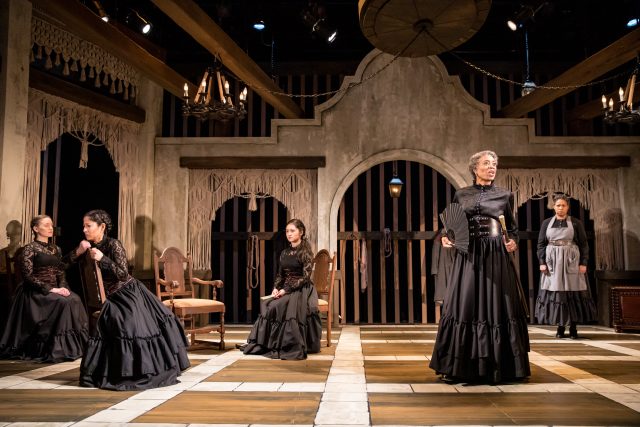 An area premiere can be both exciting, nerve-wracking and intriguing all the same time. It’s exciting because we as audience members are going into a show we really don’t know anything about; both the plot and music are new and fresh to us. However, that can also be a little strange to someone who doesn’t mind seeing Little Shop of Horrors twenty times because it’s familiar. Humans like the familiar. I went out of my comfort zone a bit by seeing Bernarda Alba at Theatre Latté Da. The area premiere is playing through Feb. 16 and features a powerful all-female cast.

The set for this show is eerie and beautiful at the same time. Scenic designer Kate Sutton-Johnson has taken something as simple as a feeling that you get when you think of a house in Spain and visualized it into a set. Costume designer Alice Fredrickson designed a sweeping array of similar black costumes, highlighted with bits of grey, lace and a deep red that bring out the passion these women have for breaking free from their mother’s grasp.

The long dresses are incorporated strategically into the choreography that Kelli Foster Warder has created. Warder takes something as simple as a long black skirt and is able to have each and every actor use it as a prop in many of the numbers. What I enjoyed is that whenever an actress used their dress, it was intentional, it had a purpose. It never felt like a throwaway moment. All of these technical elements are brought together by Mary Shabatura’s lighting design. Shabatura highlights shadows vividly, which adds to the feeling of suffocation that many of these daughters feel both from the heat of Spain and under their mother’s control.

A show like this must have a strong cast of performers, and director Crystal Manich has done just that. This all-female diverse cast—which I love so much—supports each other on stage so beautifully. Even if their characters fight in almost every scene, they still have a sisterly bond that shines on stage as performers.

Next to the title character, Kate Beahen has the meatiest role to play as Angustias because she is the only daughter of Bernarda Alba’s first husband. Beahen plays vulnerability well onstage, as she’s able to straddle the line of never making us feel constantly sorry for her. I truly enjoyed the performance by Aimee K. Bryant as Poncia, who acts sort of as the head maid and servant of the household. She’s one of, if not the only, character that is not afraid to stand up to Bernarda Alba a large majority of the time. Bryant is confident and someone I would enjoy seeing more on stages across the Twin Cities.

The driving force behind this show, however, is Regina Marie Williams as the title character. Immediately upon walking out on stage, her presence is strong, commanding and deserving of every single audience members attention. Not to mention she has such a beautifully mature voice that I could listen to for hours. You can hear the wisdom, experience and talent in both her speaking and singing voice. I remember a few years ago stumbling upon a recording of the late Alan Rickman reading Shakespeare poems, and I couldn’t stop listening. Williams has that type of voice. A voice that I would honestly listen to while she read something as simple as a phone book. She’s quickly became one of my favorite performers in the Twin Cities.

Bernarda Alba is certainly a unique show. It doesn’t follow a typical musical theatre formula. I’m not saying that theatre has to follow a formula, that’s why we love art, right? There are no rules. The show is short, only 90 minutes, and never once had applause from the audience until the very end. The best way I can describe this show is that it’s special and unlike what we typically see on the stage. However, that’s also Theatre Latté Da’s bread and butter, doing the unusual and not often produced.