‘Because Art’ – John Killacky’s Latest Work Reflects On His Journey 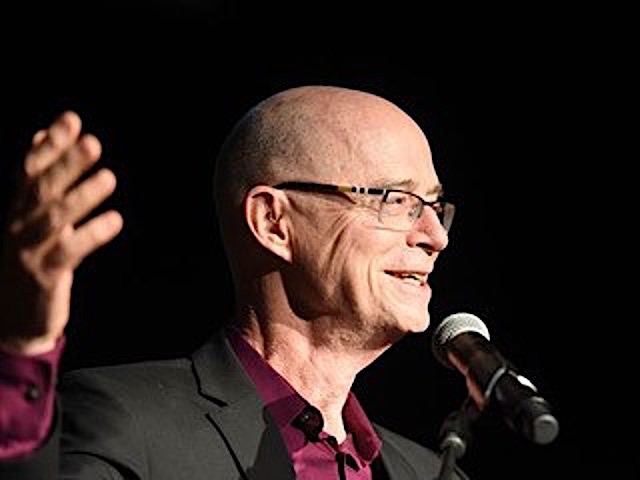 John Killacky’s book, Because Art, was released in 2021. Killacky is an artist, a community activist, philosopher, and an LGBTQ elder who has seemingly lived several lives in one. Currently, he is a state representative in Vermont, and graciously took the time to tell me about his life and art, and the relationships between art, political activism, and community.

“When I moved to Minneapolis in 1988, I was at the Walker Art Center, and in 1988 AIDS was decimating the artistic community in New York and on the West Coast. Not so much in the Midwest yet, but so many of my friends, my colleagues, were dying from AIDS. So many people. Artists were often the first responders to fight back against the government and the pharmaceutical companies and the media indifference. When I came to the Walker, because I was a curator of performing arts and we were doing contemporary art, it made sense to bring in those politicized voices.”

One of the more notorious performances was Ron Athey’s, whose Four Scenes in a Harsh Life depicted bleeding on stage and caused outrage that made it to the floor of Congress and to SCOTUS.

“I got a phone call from the visual art person at the Star Tribune. She was saying, ‘I can’t believe what you did! You’re gonna see it in tomorrow’s paper,’ and I said, ‘well, why don’t we get together and talk about it? You weren’t there.’ [She declined the offer and] said, ‘I heard blood was dripping on [the audience] and they ran for their lives, and chairs were overturned,’ and I said, ‘that didn’t happen.’… That was the first of twenty articles about it. Senator Helms was involved again, and the idea of someone in 1994 dealing with blood on stage was so terrifying for people. The AIDS pandemic was still so extreme that people could not see this as a redemptive act and people could not see the iconography of Saint Sebastian, [or] maybe they could, and that incited them more… Donald Wildmon of the American Family Association gave out my home phone number and home address on 26th and Pleasant where I was living, and I got these letters that were unbelievable: people praying for my salvation, people telling me I’m gonna go to hell. I got phone calls saying, “We got the abortion doctor. You’re next.” These people think they’re caring Christians, and they’re saying they’re gonna kill me or they’re gonna damn me to hell for something they hadn’t seen.”

“I did become politicized. I did run for the Democratic Farmer Labor Party back then. It was so interesting for me to run as a delegate to the state convention because I didn’t know what to do, I didn’t know how to dress… I learned a lot with that. It was great to realize that those shouldn’t be separate worlds, they should be integrated. Artists should be involved. From that moment on I was very involved, and so part of the part of the book – the beginning part – is about that. Going in and embedding myself more in the community, in Indianapolis and then in San Francisco and Allen, Vermont, and in 2018 I retired from Flint Center in Burlington that I was running. I ran for the State House of Representatives and I’m serving my second term. It all comes from the time at the Walker: I realized that art and politics, it’s all one thing.”

Killacky collaborated on a short film recently about mothers who have passed away. Made in November 2019, the date for the Minneapolis showing was set for the following May.

“It was the same week George Floyd was murdered, and you know his last words were calling out to his mother. I did a simple piece where we just talk to our dead mothers. It was so magnificent to be in the Twin Cities community and you could hear the helicopters flying overhead Patrick [Scully]’s house. Suddenly we were all about mothers and it politicized our piece that really had not a political intention in it. It kind of showed me that it really is about the audience decides about the meaning of the work. The artists make the work, and then the audience or the audiences define the work… The other thing is, we made it pre-pandemic, but it’s been aired around the world now. In a pandemic world where people didn’t get to say goodbye to their mothers, or their loved one, or their uncle or their grandma or their grandpa, you know. So what we get when we are at screenings is people talk about their own sadness not saying goodbye. Well, that’s why we made this piece: for people to find meaning.”

“What I found so beautiful and so powerful is the response artists and artist collectives gave to the horror of George Floyd’s murder… It’s a visceral response, a street response, to this and I was thrilled about this. Because the world had gotten a little too pretty and a little too complacent with itself, and now we’re back on the streets at the edge of things, and over time I think that’s really essential.”

“The first part of my book is pretty formal. There’s commencement addresses, speeches I’ve given, there’s long essays I’ve written. The second part are critiques and reviews of artists. These are artists with some meaning to me, or they’re part of my life, or I lived at that time with them. It was really through telling their stories that I get to tell my own story. The third part is interviews with artists. It really does require the lens that I’ve lived, and so it’s Janis Ian, it’s Alison Bechdel, it’s Tony Kushner. I loved those interviews and I love those artists. Like, what did they tell us? They told me about perseverance and failure and resiliency in the cycles in the art world and how you just go back to the work. I find that section so hopeful… Those conversations were so freeing to me and inspiring to me. I’m hoping that artists read those and say, ‘Oh it’s okay to be bewildered! It’s okay to not know what you’re doing right now!’ We just have to work on the process.”

“[Because Art] is like a living archive, but it’s more than a mosaic form. It’s not linear, as you saw, things were not presented chronologically. You can read one little piece, put it down, you know, read the table of contents. If you like Tony Kushner, go there first. There’s no reason you can’t enter the book there, you can enter it anywhere you want. Most of [the artists reviewed] are queer or disabled, and so some of them are less known than others. I thought that was really important to make sure that they are remembered.”

There is so much substance in this book that this article hasn’t covered, as well. Killacky suffered a spinal tumor near the end of his tenure at the Walker which left him paralyzed, having to learn to walk again. He ponders Buddhism, as he spent time in the Himalayas studying with monks. He has a horse, and a husband, and is continuously creating. Because Art certainly has something for everyone, and can be purchased online or from your favorite local bookstore.