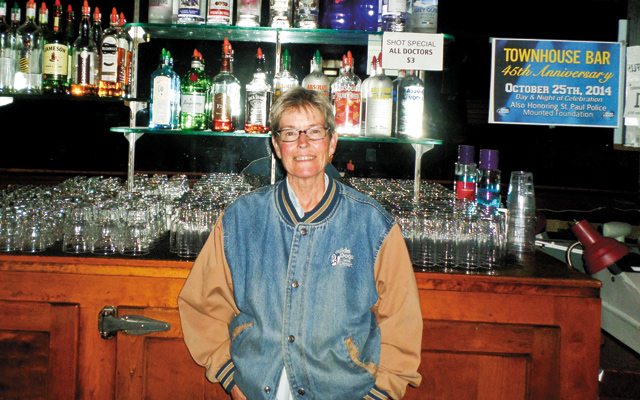 This year is a dual celebration for The Town House in St. Paul. It’s the bar’s 45th GLBT anniversary. As well, it’s owner Holly Monnett’s 40th anniversary at the bar.

August 1 is an auspicious date for Monnett. On August 1, 1974, she began her tenure at The Town House, moving quickly from barback to bartender to manager by 1976. On August 1, 1987, she bought the bar from Jewell, who suddenly died shortly after on September 30. She’s now the only gay woman who is proprietor of a local GLBT bar.

On October 25, the Town House will host a gala party throughout the day and night to celebrate its 45th anniversary. Beginning at 3 p.m. is a special Old Timer’s Party, with a DJ playing favorite oldies. YOLO performs 3-6:30 p.m.. Chef Larry’s famous buffet will then be served. Jen Mink, a police officer with the St. Paul Police Mounted Patrol Foundation, will be in the parking lot next to the bar with two trained horses and merchandise as a fund-raiser for the organization. At 9 p.m., Lori Dokken will play in the Lounge. The main event is a show starting at 9:45 p.m., hosted by Mary Brewster, featuring a cavalcade of female impersonators, including Dotti West, Miss Toast of the Town House 2014. Monnett sums up The Town House’s 45th-anniversary success story this way: “Throughout our long history, we’ve continually been able to change with the times.”