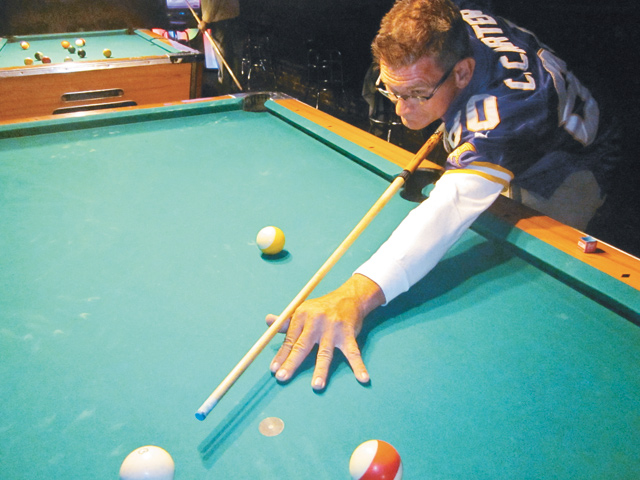 Where can you find superb late afternoon entertainment for only $5? Try the pool tournament at the 19 Bar the third Sunday every month at 4 PM. You’ll find a fun, friendly experience.

For more than 20 years now, the event has been a tradition at the venerable 19, the oldest GLBT bar in the Twin Cities, which marked 61 years in May. The tournament began after supportive owner Gary Hallberg, an avid pool player, bought the establishment in 1992.

Buy-in for the double-elimination tournament is $5. Prizes depend on the number of players participating, with the buy-in cash divided two-thirds for first place and one-third for second place, with third place receiving a $15 bar tab.

An ideal venue for such a competition, the 19 has three state-of-the art pool tables, which are 75¢ during other times. They’re the most popular activity there.

Pool aficionado Jerry Schwartz coordinates the monthly events. Schwartz says, “Anyone is welcome to join us for the tournament, whether you’re a player or spectator.” His brother, the late Patrick “Hero” Schwartz, was a Twin Cities gay activist who launched the nationwide “pie-ing” of homophobes when he tossed a cream pie at Archbishop John Roach of St. Paul and Minneapolis in 1977 that landed in his face.

The 19 participates in the weekly games of the Twin Cities Gay Pool League, which also holds a year-end tournament in the spring.