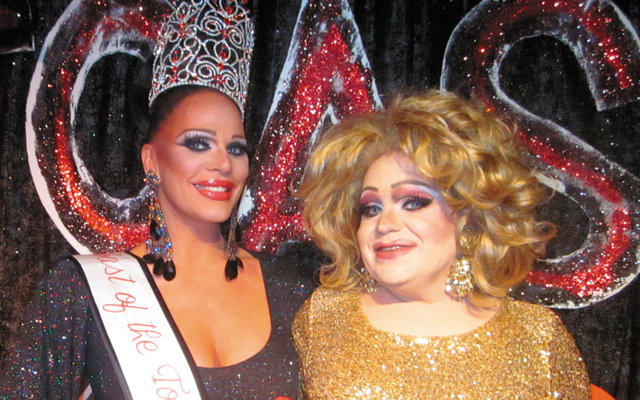 One of the oldest Twin Cities GLBT club contests, the 2013 Toast of the Town House Pageant took place on August 23 at the bar in St. Paul. The theme was “Viva Las Vegas.” Hosted by Lily White, Pumps & Pearls Drag Revue Show Director at the Town House, the evening drew a large crowd. Six contestants competed for the coveted title.

Tiffany T. Hunter captured the crown. Her moving talent number centered on triumphing over fear involving homophobia, hate crimes, and gay teen suicide. In the evening gown competition, her stunning gold dress and presentation were flawless. Her question-and-answer response aptly told how she would serve as Toast of the Town House.

Originally from St. Louis, Missouri, Hunter moved to the Twin Cities after winning the Miss City of the Lakes title in 2008. In both 2011 and 2012, she was second runner-up in the national Miss Continental Pageant.

Brandonna Dupri, stepping-down Toast of the Town House 2012, performed several numbers, as did other past titleholders, Mercedes Iman (2011), Eileen Dover (2010), Jamie Monroe (2009), Kaydance (2008), and Dramatica (2007). In keeping with the 2013 theme, the ever-excellent Barbara Gordon, Toast of the Town House 2005, wowed with her in-costume rendition of Elvis Presley crooning “Viva Las Vegas.”

The Pumps & Pearls Drag Revue is the featured entertainment every Wednesday night at the Town House, which marks its 44th anniversary as a GLBT bar this fall.