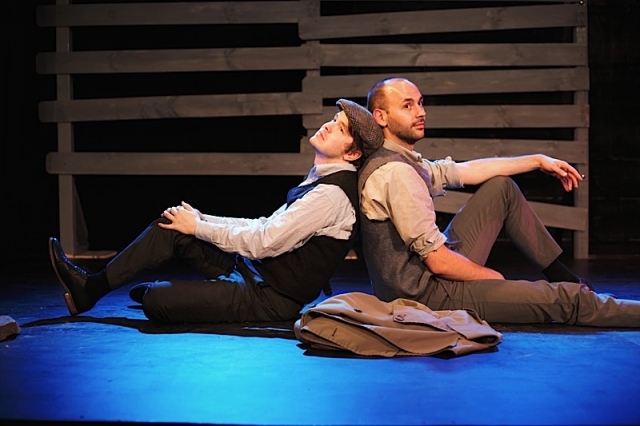 Playwright Martin Sherman significantly made the world at large aware that queers were targeted in earnest by the Nazis during Adolf Hitler’s reign of horror and terror. His 1979 drama, Bent, begins in 1934 just as The Night of the Long Knives is wrapping up its onslaught of executions within the Fuhrer’s military complex. This action, also dubbed the “Rohm Purge”, focused on the Sturmabteilung (the SA), the paramilitary force run by known homosexual Ernst Rohm, whose male troops were believed to have been sexually active among themselves.
Sherman astutely and ingeniously imagines how possible repercussions could ricochet into an arrest campaign of civilian homosexuals and those perceived to be homosexual, i.e. cross-dressers. About 100,000 were arrested for male homosexuality. Half of those went to prison. 10 to 15,000 were sent to concentration camps, generally assigned to hard labor. Some homosexuals suffered the atrocity of castration as a form of punishment for simply being gay.
Gays were made to wear pink triangle badges. This stigmatized them as lowest of the low: something Sherman iterates at points in Bent. Sherman, who is himself Jewish and gay, has gay protagonist, Max, wearing a yellow star, the badge Jews were compelled to wear. This gives him small but significant advantages over those with pink triangles. Six million Jews died in Nazi-occupied Europe in World War II.
The Band Group, as a joint venture with the region’s premier queer equality nonprofit, OutFront, has staged a magnetic production of the classic that has discovered the power of Sherman’s use of language. Every single actor on the Phoenix Theater stage delivers the words matched with the action masterfully under the insightful direction of Adrian Lopez-Balbontin. It may have you on the edge of your seat.
Adam Rousar’s Max is a striking portrait of a down-low gay man whose formative homosexual experiences have fostered a utilitarian physical approach to relationships to the exclusion of the full humanity of the men he becomes close to—even those he subconsciously has real feelings for. This might be thought of as his tragic flaw in a play that can certainly be described as a classical, albeit, modern tragedy. Max’s promiscuity and his drinking have unmoored his life at that perfect storm in time when the post-Weimar heyday of queer acceptance has all but lost its steam. Rohm’s sexuality could no longer serve as a safety net.
Rousar’s is a haunting portrait of a young man who having lived by his wits for pleasure, has somehow managed to grow enough within to care about Rudy (Andrew Newman), a young dancer he rooms with. Therefore, urbane Max’s betrayal of Rudy is almost biblical as in Peter’s denial of Christ at Gesthemane.
A vulnerable Newman sweetly endears as an innocent who does not fully grasp the evil machinations of the Nazis. He knows they’re really bad guys, but he is genuinely naive to what they’re capable of. Bent’s disturbing train scene brings that to harrowing light.
Kjer Whiting is marvelous as Horst, the gay man with the pink triangle with whom Max is sentenced to hard labor alongside of. They’re constantly surveilled by guards as they monotonously and exhaustingly move heavy rocks from point A to point B, then back again, and so on. This task serves no other purpose that to wear them down mentally and physically.
Whiting’s portrayal is beautifully layered. He is a mixture of anxiety, ironic wit, and because of the character’s more feminine essence than Max’s, a sense of doom. There is also resentment because Max has finagled his way into procuring a yellow star, the Jewish badge, which signifies him as higher than Horst’s pink triangle. In addition Max is physically stronger and more masculine in appearance than Horst, thus making him less an of an object of ridicule and perhaps even more of an object of desire to certain others in the death/labor camp.
No spoiler but Bent’s most fabled sexual moment is very well played to be sure. It has come to be one of the most renowned moments in 20th century drama.
The smaller supporting roles are uniformly terrific. Alex Church is utterly chilling as a Nazi Captain who coldly degrades Horst. In contrast, Aaron Borger brings playful sexiness to the role of a stormtrooper. If you go out for beverages after the show, the contrast of how each interpret homosexuality is something worth discussing.
A sharp-edged Corey DiNardo shines like a dark crystal as Greta, a callous drag queen who fancies himself untouchable because he assumes he qualifies as straight. He says he’s only in the cabaret scene to make money. And perhaps Greta is telling the truth. Nonetheless, one suspects his days are numbered and his illusion of stability is folly. Self-deceptively not recognizing that you’re swimming in a fish bowl can be one’s Achilles heel.
A dignified James Satter intrigues as Freddie, Max’s uncle who attempts to get secure his nephew’s passage out of the fascist state. Rousar and Satter evoke a spirit of espionage that enhancesBent’s inherent ambience of paranoia. The two actors fascinate as they open a window into how men with same sex attraction navigated their secretive interpersonal connections within antigay German society.
Lopez-Balbontin and Jex Arzayus have co-designed a minimal set that artfully uses wood strips to represent various locations. The set works in the space as well as, if not better than, any I’ve ever seen in the Phoenix space. Kaitlyn Larsen’s costumes expertly reflect the historical period and situations.
Bent
Through Sept. 15
Phoenix Theater, 2605 Hennepin Ave., Minneapolis
www.phoenixtheatermpls.org