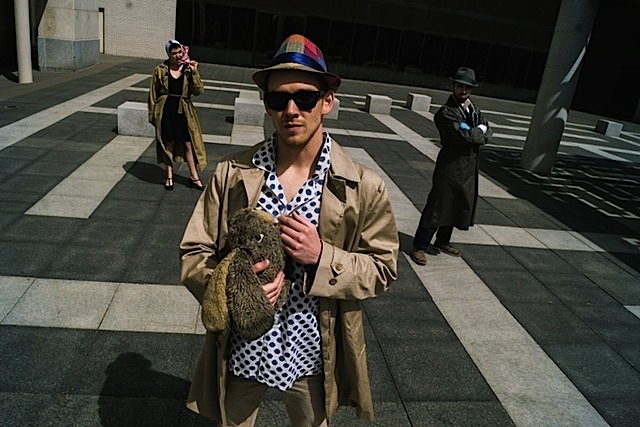 25 years after The Baltimore Waltz opened Off-Broadway, Theatre Coup d’Etat has staged a dazzling revival that sparkles, and yet elicits tender intimacy, at Springhouse Ministry Center. Playwright Paula Vogel employs a vaudevillian style to tell the tale of a terminally ailing straight woman and her gay brother as they traipse across Europe. Since she thinks she is on her way out, Anna is determined to have sex with lots of men before her Acquired Toilet Disease (ATD) finally kills her.

The play’s name for the disease — ATD — is both a play on words and a satirical jab at Acquired Immune Deficiency Syndrome (AIDS), which many in the early years of the pandemic actually thought could be gotten by sitting on an infected toilet seat. A mistakenly absurd but dreadfully common misconception that added to the hysteria and the stigma. However, The Baltimore Waltz also becomes a metaphorical look at the playwright’s own grieving process. Vogel, a lesbian, actually lost her brother to AIDS.

Lauren Diesch has directed her actors with a luminously clear understanding of Vogel’s comic pizzazz and the deep levels of anguish that run just beneath the surface. Kari Nielsen and Nicholas Kaspari are profoundly convincing as sister and brother. They ignite an endearing chemistry that seems as if they’ve always known one another.

The versatile Kip Dooley is terrific in multiple roles as various men of mystery and different accents. His characters have a general name: The Third Man. Vogel has drawn from the Carol Reed film noir by the same name starring Joseph Cotten with Orson Welles. This mercurial conceit reinforces the image of Europe as a place of mystery, eros, intrigue and transition; as well as shaping this remarkable play’s structure. For Pride Month, The Baltimore Waltz is the play to see!