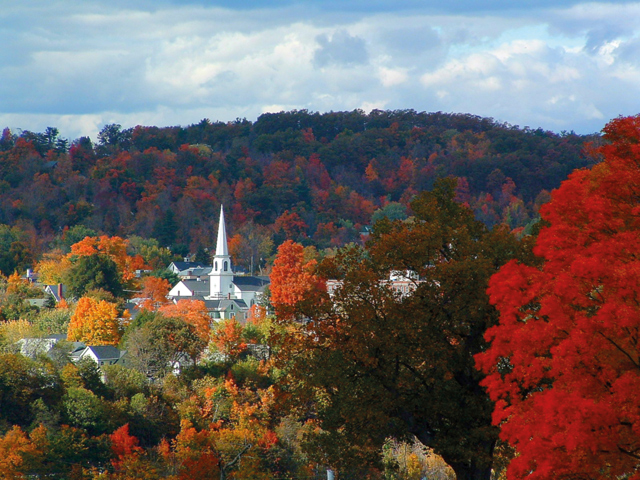 Not a peeping Tom? Time to get out the binoculars and lose your inhibitions. Nature’s annual extravaganza is about to debut as leaves change from summer’s prim palette of greens to autumn’s show-offy blaze of reds and golds. Here are some favorite small-towns where the vista along the drive is as fine as the destinations themselves.

Head south on Hwy. 61 as it traces the river with its boundary of bright maples, golden birch, and aspen—and the occasional punctuation marks of pine. Cruise all the way down to Winona, then take a break to get to know the town.

Wheat and lumber fueled its golden years, 1870-1890, personified by the brick and stone buildings manning Third Street that still thrill fans of gorgeous architectural design. Another draw: the robust cultural vibe underscored by its three colleges, and the drop-dead natural beauty of forested bluffs that line the mighty river.

J.R. Watkins was an earlier arrival who relocated his now-worldwide spice empire here. Tour the Deco-designed shop-cum-museum—you’ll spot its white tower from anywhere in town—to ogle its line of products, from early ointments and complexion powders to (who knew?) chewing gum, coffee, and, of course, all those exotic flavorings salesmen used to peddle house-to-house.

Watkins’ son-in-law became president of Winona National Bank, whose grand Egyptian Revival building he had built in 1915, calling on Tiffany to fashion the marvelous stained glass windows that still enchant visitors today. Close by, rival Merchants Bank boasts jaw-dropping stained glass of its own, plus a 1915 mural of the city glowing behind the tellers’ desks.

Continue your wander down Third Street on a self-guided tour (phone app available) of the seven-block stretch preserved on the National Historic Register, careening from Italianate columns and Queen Anne curlicues, to sturdy Romanesque Revival.

Watkins’ story gains momentum in the History Center, lodged in the brick armory of 1915 and loaded with local artifacts, ranging from the prehistoric skull of a saber-tooth cat to Watkins’ daughter’s fancy carriage. A timeline weaves visitors through intricate Dakota bead and quill embroidery followed by Civil War regalia and on to reconstructed Main Street’s pharmacy and general store. It showcases relics of the gin-soaked Roaring Twenties from this, “the wettest town in the Northwest,” complete with blackout instructions.

Folks from as far away as Poland with hopes of securing work in wheat or lumber, arrived in the 1890s. Their story unfolds in the sprawling Polish Museum, with displays of treasures from the Old Country, from embroidered waistcoats to wedding dresses, china dolls with sky-blue eyes, and the darker blue of Poland’s signature pottery, also on sale in the gift shop. But the museum the city is most proud to celebrate is the Minnesota Marine Art: a collection, unique in a town of 28,000, that travels from Renoir and Monet to Van Gogh and O’Keeffe.

Winona’s oldest dining op is the classic Lakeside Drive Inn, hauling victuals to your car since 1938. Prices haven’t changed much since then, either. Don’t miss the homemade root beer.

Then, cross the street to the park bordering Lake Winona. Rock in the romantic swings for two, feed the ducks, catch a concert at the bandshell, or head to the lodge for free rental of canoes and bikes, or cross-country skis and skates, depending on the season. Or stroll the river’s levee, counting soaring eagles and low-slung barges muscling down the river before it’s time to hit the highway once again.

Or cut short your drive south on Hwy 61 at Red Wing, one of Minnesota’s reigning beauty queens since 1875. That’s the year the historic red-brick St. James Hotel debuted to serve travelers along the bustling Mississippi, the Interstate of its day.

Then came the trains. The charming railroad station of 1905 now hosts the Tourist Information office, where you can pick up self-guiding maps of walking tours throughout its historical neighborhoods. Stroll past the vintage brick facades of businesses and gratuitous homes of a myriad of architectural persuasions—Italianate, Victorian, Queen Anne.

The station also is home to Red Wing Art Gallery, representing regional artworks to view or purchase. It’s also a prime stop on the levee’s riverside hiking/biking trail that curves under bluffs where eagles perch, with views of bright Wisconsin foliage across the water.

Along Central Park—a wedge of greenery connecting the river to a fringe of woodsy hills—linger near the bandstand and count the spires of half a dozen graceful churches. Patrol Main Street and Third Street to browse among unique shops such as Uffda, source of all things Swedish, to Thunder Clan Trading Post, offering artisan crafts of nearby tribes. Fair Trade Books is crammed with well-curated volumes, while Red Wing Shoes—the brand’s mothership, selling 2.2 million of the iconic boots a year—also boasts a free museum showcasing the company’s history and process. Red Wing Stoneware, on the north end of town, does the same via museum, demos and sales gallery of its trademark Red Wing pottery.

For spectacular views of fall colors, hike up to Barn Bluff, overlooking the river. Then head to Old West Main Street, the starting point of the popular Cannon Valley hike/bike trail, also ablaze with autumn hues. Also on the outskirts lies Falconer Vineyards & Winery, overseeing a scenic valley spreading below its deck; pause to enjoy a sip and a snack.

To plan your adventure, visit www.redwing.org.

Stillwater is a quick 25-mile sprint east to our state’s border—uneventful scenery until you reach the town itself and later proceed to William O’Brien State Park on its northern edge, worth an afternoon’s meander amid its glowing maples and firs.

With bragging rights as Minnesota’s oldest town, Stillwater flourished as a boomtown of the logging era, and its lumber barons lived the good life to the hilt. Fortunes were made on timber, and they used that money to erect drop-dead gorgeous homesteads. It’s a movie-set town where time stopped at the height of those prosperous days, still populated with those eclectic and eccentric mansions, which cavort from Italianate to French Empire, from Classic Revival and Gothic Revival on to Queen Anne and Queen Victoria—complete with fanciful cupolas, widows’ walks, turrets and verandas.

Main Street’s storefronts of yesteryear have been reclaimed by merchants of today to serve as antiques shops (over 200 within six-blocks). They also house a number of pleasant bookstores, side-by-side with art and crafts galleries celebrating regional talent, and many  one-of-a-kind boutiques, including a Christmas shop, gourmet cookware store, an old-time meat market (with a café upstairs to sample those savory brats), a classic, small-town bakery, a wine co-op featuring Minnesota labels, and a lively farmers’ market.

The lowly lumberjacks who felled the barons’ logs liked to party, too. A hundred years ago, Stillwater’s saloons outnumbered its churches. Today they’ve been reborn as coffeehouses and snug cafes. After dining well, it’s time for a workout on the water. The wild St. Croix River offers kayakers and canoe enthusiasts another leafy peep show before heading home.