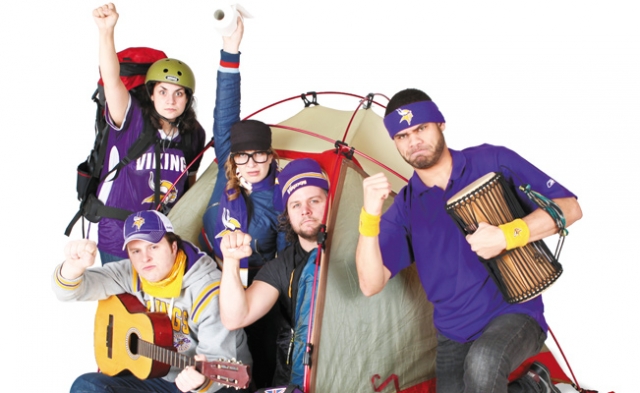 Occupy Arden Hills; Or, Brother Can You Spare A Dome? Photo by Dani Werner

Occupy Arden Hills; Or, Brother Can You Spare A Dome? Photo by Dani Werner

This show’s run began before the stadium deal went through the state legislature and gay Minneapolis city council member Gary Schiff valiantly tried to stop it. So the content may have changed since I saw it. Having seen it before the Viking coup, I would say that this boldly neoconservative revue is less about and against the Vikes and their corporate groupies and more against grassroots politics. The Brave New Workshop always states that they intend to offend everybody, but their focus here is clearly against the Left. Indeed, these comics kick the Occupy Wall Street movement right in the groin. For example, Ellie Hino’s shrewdly vindictive yoga teacher spoof with its pelvic pretensions would be a delight to every Patriot Radio junkie. Guaranteed to make sure every xenophobic opponent of alternative fitness will rush right back to the couch and potato for Rush on the radio while watching O’Reilly on Fox and guzzling whatever his/her favorite beverage may be.

And that’s just it, this energetic collaboration directed by Caleb McEwen is more ridiculing than satirical and even has the Occupy organizer played as a swishy queen of color (Andy Hilbrands). What’s intriguing is that Josh Eakright really lacks the guts to go for the gusto with Vikes Owner, Zygi Wilf. To point, this show’s success in making the Occupy leader a swish is not complemented by an equivalent stereotype of Zygi as ‘greedy Jew.’ Interesting who we’ll slam and who we won’t. That said, Jewish issues are actually sardonically spoofed right on the set where Martin Niemoller’s immortal First they came… statement about the Holocaust is scrawled in chalk on the set! Amazing!

But back to Eakright: he also plays a white suburban guy having a midlife crisis. He wears an African knitted cap—green and yellow—as he infiltrates the Occupy group to get young female booty. But it’s not played to make white middle-aged guys look vacuous. It’s played for laughs with a wink and a nod. After all, we all know that vacuous young progressive bimbos like to put out, right? That’s what the show essentially says. What’s interesting here also, is what’s not portrayed. Various news outlets have reported of derelicts being dropped off in Occupy zones by law enforcement to create havoc—your classic agent provocateur stigmatization. However, this was not the sort of infiltration this revue was interested in when I saw it. Surprise. Surprise.

Daniel Alexander Jones enriched the Twin Cities queer performance scene in the 1990s with his extraodinary solo play Blood: Shock: Boogie staged for Outward Spiral, which was the area’s primary GLBT theater at the time, and in 2004 Pillsbury House produced his play Bel Canto, which was named by Lavender as one of that year’s two top productions. Unlike so many who came out of the ’80s and ’90s performance art solo trajectory, Jones has developed into a true master of the crafts of both writing and acting.

Jones has returned to Pillsbury House with another solo work, which has garnered raves in New York. Moreover, this particular piece, RADIATE LIVE!, is part of a creative process, you might say, that began right here in River City. Jones relates “the first time I performed as Jomama Jones was in Minneapolis. Fall, 1995, I remember standing in Patrick’s Cabaret—the old space—as the lights rose. I was terrified, but she filled me like lightning and all was transformed. In the rowdy audience that night, in addition to magical Patrick, was Djola Branner and two late great artists, Rebecca Rice and Kathi Gagnon—their laughter and testimony made baptism for the birth of Jomama. That is Minneapolis for me: an artistic birthplace. I make live art to be in communion and dialogue with people. Throughout my career thus far, the audiences in the Twin Cities have been radically present, sophisticated, demanding, and courageous in our dialogue. I would not be the artist I am, were Minneapolis not somehow etched into my DNA.” 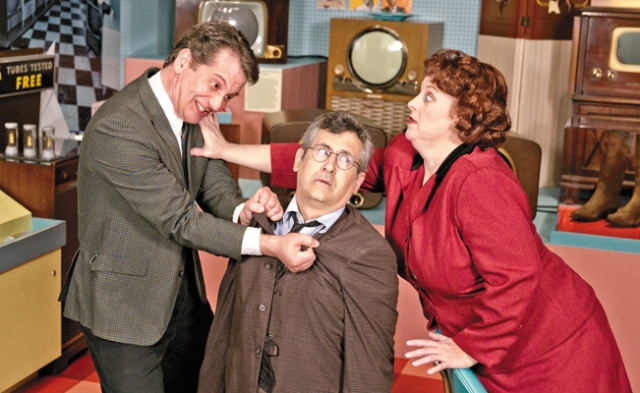 Laughter on the 23rd Floor. Photo by Petronella Ystma

America’s most popular living playwright, Neil Simon, developed much of his craft in the early 1950s writing skits and vignettes for early television’s legendary series, Your Show of Shows. This precursor to the so-called variety shows later popularized by greats like Carol Burnett and Flip Wilson drew, in many ways, from vaudeville. Sid Caesar and Imogene Coca, two of Show of Shows’ major stars, were household names right up into the late 1960s. Laughter on the 23rd Floor is Simon’s homage to that experience and reminds us of the intensity and skill that great comedic writing and acting require. Something that’s often forgotten in our time when too many ‘no-talents’ think they’re actually funny.

Director Zach Curtis, admired by many for his affinity for American classics, shares “my favorite thing about Simon is that he not only writes jokes but he also writes funny lines. The characters aren’t only cracking wise, but they are just funny people. Simon knows funny people. And this show is nothing but. And they are based on a time Simon has called the best time of his life and you can see why.”

Discrimination against gays and lesbians is not just a feeling, it’s codified in law. That’s why this uniquely entertaining piece of educational theater is a must-see for everyone in this high stakes political year. The six Project 515 players, directed by Bryan Gerber, have been touring throughout Minnesota and will have a special engagement at the Cowles.

Matthew Everett, who has been central to the development of the script, says “I’ve never considered myself a particularly political writer, but since I write about issues that impact the gay community, inevitably it seems the personal becomes the political. Project 515’s Executive Director Ann Kaner-Roth and tour director Bryan Gerber came to me with an intriguing challenge: somehow dramatize the discrimination gay and lesbian couples face because of the 515 Minnesota laws which treat them differently than legally married heterosexual couples. Touch on the upcoming marriage amendment which is part of the ballot of the November 6th election. Put those struggles in the larger context of the gay civil rights movement. And, as Harvey Milk would say, ‘don’t forget to give them hope.’ Oh, and do all that in under 45 minutes.”

Rather than just sitting around worried about the impending vote on the marriage amendment, Everett adds “this script allows me to use my skills as a writer and do something. The actors and the director have taken the Project 515 Tour all over the state—Austin, Bemidji, Brainerd, Duluth, East Grand Forks, Edina, Ely, Grand Rapaids, Mankato, Minneapolis, Rochester, St. Paul, and Winona. All of these performances were free of charge. They’re helping to contribute something positive to the political discussion around these issues. There’s always time built in after the show for audience discussion, so the conversation we want to foster around these issues begins immediately. People who’ve seen it have told me that it moved them not only to feel, but to volunteer to help change things.” Everett hopes everyone will vote NO on the amendment this fall. 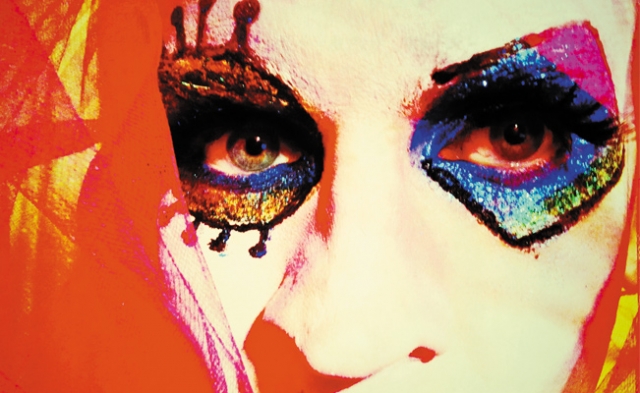 Queertopia has become a central event for PRIDE season for many people. Co-Curator Jeffry Lusiak points out that “Queertopia has grown into a full-fledged phenomenon. Every year I walk away saying it can’t get better than that, and it always does. What has remained unchanged throughout the seven years is this cabaret’s heart. Queertopia‘s sole mission is to bring together  the queer community to celebrate itself during PRIDE. It is what PRIDE is all about, relishing in the love of ourselves and of our community.”

Lusiak himself is an accomplished performer and stage director whose aesthetic has been shaped by queer content. He shares “as a queer art-maker who has always felt outside the mainstream, it has been so fulfilling for me to help create a safe, loving, and all-inclusive space for artists and audiences during PRIDE. People come back every year because of the environment Queertopia creates. People tell me ‘this is the only thing I do for PRIDE.’ because of the feeling they get when they walk through the doors—a feeling of acceptance, love, and celebration. It’s the power of Queer art, Queer Community, and Queer Love!”

When asked about how things have changed in the past seven years, Lusiak notes “the new work this cabaret generates. In the beginning, we would curate specific performances myself or one of the curators had seen throughout the year, and bring them together as a kind of ‘best of the year’ showcase. This year, nearly 95% of the pieces you will see will be new work specifically created for this cabaret. That to me is thrilling, that a cabaret can be a catalyst for 12-plus local queer artists to create and produce a new work every year. We are supporting and feeding the queer performance scene in Minneapolis.”

Given 2012’s intense political atmosphere, Lusiak has had the artists tap into that energy. He says “our theme is ‘Rallying Cry’. A few years ago I began to give loose themes to each artist to use or not use, as a jumping off point in the creation of their work in order to help shape the evening a bit. This year (Bedlam Theatre producer) Maren Ward, (co-curator) Nastalie Bogira, and I decided it was important for us to help rally the Queer Community together to help ensure our protection, equality, and rights. We chose ‘Rallying Cry’ because we are not focusing on just one issue facing the community this year, but the host of issues facing our community every day in big and small ways.”