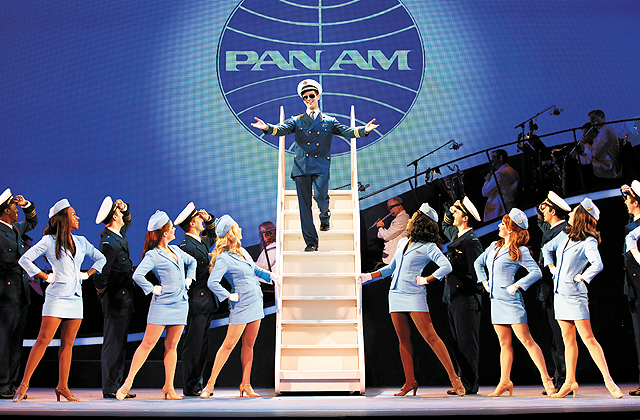 Catch Me if You Can. Photo by Carol Rosegg

Gay master playwright Terrence McNally gave us Love! Valor! Compassion! and Corpus Christi. He also gave us musicals like The Big Monty and another Tony nominee based on a hit film, not to mention a true story, Catch Me If You Can. Lead actor Stephen Anthony who plays con artist Frank Abagnale, Jr. relates “I have to believe that I am much older than I am and they should give me what I want. But at the same time, keep the mindset that I’m not a bad guy. To hear the real Frank Abagnale speak, he’ll tell you he wasn’t some criminal mastermind. It all just sort of fell into place for him. He didn’t have some great plan. So the idea is to be able to do all these things and not get cocky about it. To have the confidence, but also the heart of a 16 year old who missed his dad, thought the world of his dad, and just wanted to help his father. So to play the con man and the charmer and the great seducer and still be a kid through it all has been my challenge.” 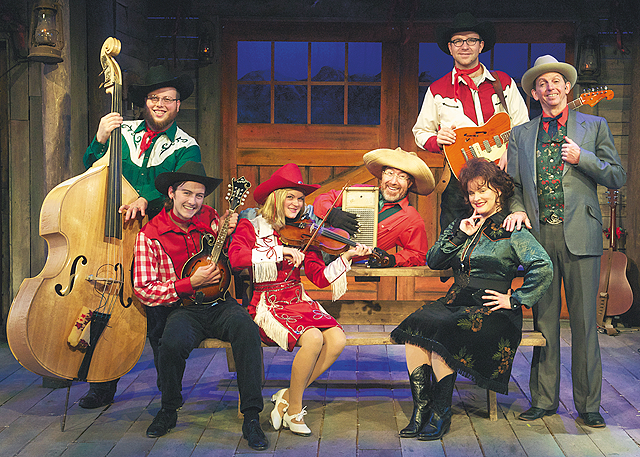 Christmas on The Ranch. Photo by Paul Nixdorf

It’s a lovely new Cowboy Christmas musical set 51 years ago, before the Nashville sound went downhill. Therefore, it’s in a position to have really, truly great country music, like it was meant to be, and I can happily report, Christmas on the Ranch delivers just that. Music Director Dennis Curley’s arrangements draw beautifully from the likes of Tex Logan and Buck Owens, as well as polkas, yodeling, traditional Irish, and the German favorite, O Tannenbaum. Something remarkably subtle happens here in that these European nods do not throw off the permeating cowboy/country aesthetic at all. They’re all woven together sublimely.

Greta Grosch’s showcase-style script is simple, sweet, and touching. The Bunkhouse Boys at the Lazy Melody Ranch’s bunkhouse and barn in the Badlands play strings and sing country Christmas tunes you may or may not be familiar with as they prepare for a surprise party for Miss Monica (Monica Heuser). She’s a beloved North Dakota matriarch who men look up to and dote on. The earnest Mayor Cody (an endearing Chuck Deeter) and the bumblingly lovable Cowhand Dusty (a delightful Tim Drake), essentially narrate the festivities.

Heuser is marvelous as a woman who exudes unconditional love and affection to everyone around her. There are darling moments between Little Jenna, Miss Monica’s daughter, who has been away studying geology, and Long Tall Joey, the bunkhouse musician who can barely contain his adoration. Jenna Wyse and Joey Ford are achingly innocent. And it’s lost innocence that director Curt Wollan brings to bear poignantly throughout. For those who lament how country music has been overtaken by high tech, NASCAR mentalities, and strident self-pity, Christmas on the Ranch returns us to the tender and community-binding mentality that ‘country’ once celebrated. Perfect for the Christmas spirit. 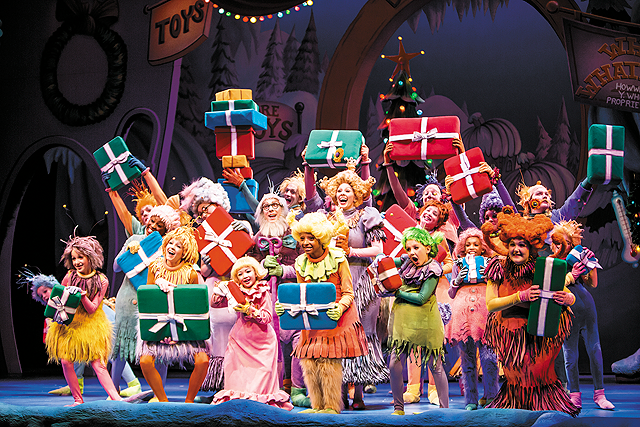 How the Grinch Stole Christmas. Photo by Dan Norman

The Children’s Theatre occasionally revives one of their major past hits and this year it’s one of their greats, originated in the 1990s, and which even played Broadway. In 2012, How the Grinch Stole Christmas, is as fresh as ever and director Peter Brosius has imbued Dr. Seuss’s classic with joy, vibrancy, and heartrending empathy. Timothy Mason’s book and lyrics are bouncy and bright as they contrastingly create a grotesque image of cynicism in the form of a hairy green monster who descends into Whoville to steal away all the Christmas presents simply because he cannot bide its denizens being happy. Reed Sigmund’s Grinch is wonderfully larger than life and a warning of the wages of bitterness. Natalie Tran’s Cindy-Lou Who, the little girl who punctures the Grinch’s psychotic baggage, is utterly enchanting. Denise Prosek’s music direction captures composer Mel Marvin’s Broadway-style undercurrents. Tom Butch’s scene design epitomizes the distinct visual style of the Dr. Seuss books. 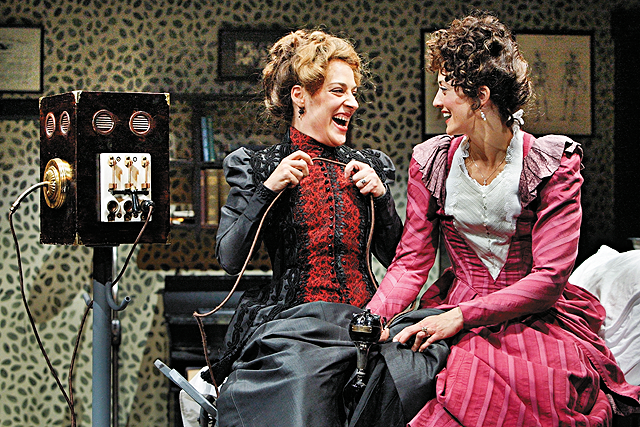 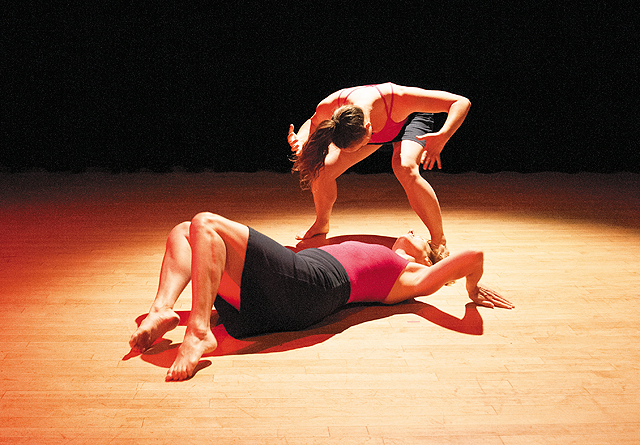 It Happened. It’s Real. You Are Here. Photo by Jim Smith

Choreographer Christopher Watson includes pieces in this offering that reflect same sex relationships. When he was working on the piece Love in Trouble when the marriage amendment rhetoric was heating up a few months ago, he shares “what started out as a suite of three abstract dances turned into duets that unveiled the tensions, lack of connection and loneliness that can occur between any two people – between two men, two women, or a man and a woman. These duets don’t have happy endings in the traditional sense, but show the emotional grit it takes to work through a tough relationship  and come out the other side to move on.”

Watson will reprise So It Goes which features both same sex and heterosexual duets in what he calls “a rather sentimental look at sweet, supportive relationships and the universality of romantic love between any two people, regardless of their sex or the difference in their ages.”