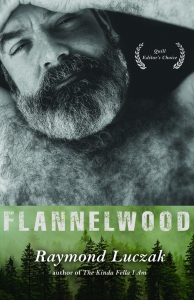 Raymond Luczak rates as a superlative writer of gay content filtered through a rich and learned imagination. Some know him as the editor of some marvelous queer lit anthologies; others as a great fiction writer who draws from personal experience, the likes of which only a courageous and adventurous gay man can. His latest novel, Flannelwood, has received some raves. It’s about a 40-year-old barista and a daddy hunk and disabled factory worker who meet at an OctoBear Dance.

Luczak shares, “The book was inspired by how a long-distance relationship of mine ended. He refused to explain why he felt it wouldn’t work out, demanding that I say we’d mutually agreed to end it and that ‘it simply didn’t work out.’ To this day, I am not sure why he chose to break up with me. I was really in love with him. It was very hard on me because there was no sense of closure. What had I done wrong? For about eight months afterward I didn’t allow myself to feel anger about what happened, but when I did, boy did I feel a lot of rage. Somehow in the heat of that rage, I wrote the first draft of Flannelwood. It became my way of seeking potential answers as well as closure on that situation.”

It is sometimes said that musicals are the romantic religion of gay men and straight women. The yearning for the love of the ideal man surely fuels that predilection. Even if the guys are rough around the edges, that one special something can shoot through and simply undo us. Damned men! Can’t live with ’em! Can’t live without ’em! Yes, lets face it: that’s the not-so-subconscious reason so many of us are so hooked on musicals. Admit it, didn’t you just ache for the strength and masculine beauty of Christopher Plummer as Captain Von Trapp (I did) or didn’t you want to dote on Tevye (I did), a nurturing masculine figure like a favorite uncle you could go to explain those things that you knew that only an earthy masculine pillar of strength could enlighten you on? Such men and representations of them are spiritual tonic. And of course they’re all fantasy. But fantasy can assist us in discovering what we want in another intimate partner. And there’s something to be said for that.

If you adore tough guys, and you know you do, even if they don’t vote the same way you do, then you’d better rock your boat and sail over to the Guthrie to catch their big summer musical production of Guys and Dolls directed by Kent Gash. Taken from stories and characters by Damon Runyon, the musical’s book writers Jo Swerling and Abe Burrows seize the spirit of the urban jungle and the yearning for love beneath its rough exterior. Frank Loesser’s tunes reverberate as some of the most iconic of Broadway’s songbook: “Luck Be A Lady”, “If I Were a Bell”, and “(I Love You) A Bushel and A Peck”.  Songs that also went on to be reprised by some of the greatest singers of the 20th century, like Doris Day, Frank Sinatra, and Seal. That’s right. Seal. His rendition of “Luck Be a Lady” is out of sight.

What makes a Guys and Dolls revival in 2019 so timely, is its irrepressible optimism in the face of the rugged side of city life. It doesn’t go to the dark places of the film noir that the audience of the early 1950s—the time of its first colossal Broadway run—would have automatically apprehended. It showed a brighter, more hopeful side. That doesn’t make Guys and Dolls naive in the slightest. But because it lives within a noirish context that had been flourishing since the 1930s in films and pulp fiction, its motifs were familiar across the spectrum. That said, you have no need to be a film noir buff to relish it and share the joy. But if you want a few movie titles to deepen your appreciation, not to mention, have a great time watching, you can check out John Huston’s The Asphalt Jungle (yes, that was the splendid Anjelica’s dad) released in 1950, the same year Guys and Dolls opened on the Great White Way. Or there’s Billy Wilder’s Double Indeminity with a dazzler turn by Barbara Stanwyck or, talk about the ideal man, Robert Mitchum in Out of the Past. 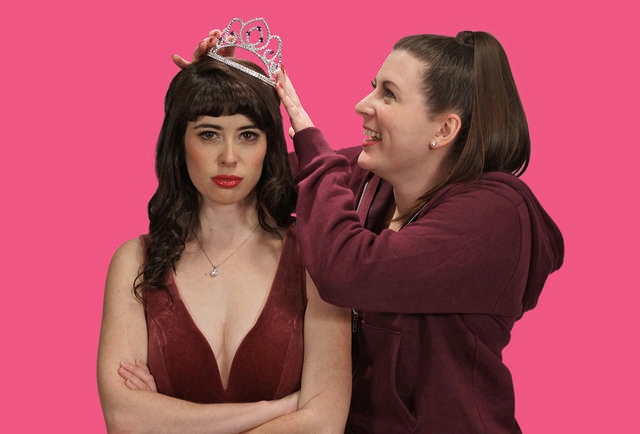 Playwright-composer Keith Hovis taps into how we get stuck in the past. In his new musical, Jefferson Township Sparkling Junior Talent Pageant, he relates how so many of us cannot let go of a breakdown in later childhood or youth. Hovis says, “At core, Jefferson Township is about finding your way when you’ve hit an age where you’re told you should already have a plan in place. It’s about going home: that place where you grew up and helped shape your identity and values, and suddenly realizing you feel like an outsider in your own community. It’s about realizing that success and happiness come in many forms, and sometimes you need to open yourself up to possibilities you never considered before.”

Laura Leffler is admired for her direction and performances of ancient classic adaptations of Aeschylus and Sophocles for Savage Umbrella. However, here’s a chance for the gifted theater artist to attune to the current day and the problem that Hovis speaks of. She says, “Jefferson Township Sparkling Junior Talent Pageant is an irreverent musical comedy—think a mix of the musicals Avenue Q, Heathers, and 25th Annual Putnam County Spelling Bee. Alongside that, as we’ve been developing the show, it’s been really important to Keith Hovis, the writer/composer, the cast and to me, to try and present these characters with authenticity. This means building in more backstory and personal history. For instance, we have Val, who’s the current, reigning pageant queen. In the original version, she is biting and funny, but we wanted to show what was behind that persona. Leslie Vincent, the woman playing Val, is bisexual. So it was important to her—and to Keith and I, we’re both queer—we all wanted to allow queerness to live in this small town of Jefferson. So now Val is dealing with being closeted in a small town, and the loss of a relationship, which is where some of her edge and her bite comes from. Our hometowns, or whatever community we grow up in, shape us in so many different ways, both good and bad. And one of the aspects we explore is reconciling the love you have for your community, even if you still feel like you don’t fully belong at times. It’s been really rewarding to be able to bring a lot of our own lived experiences to the piece. Which is still dark and funny, but now has even more heart at its core.” 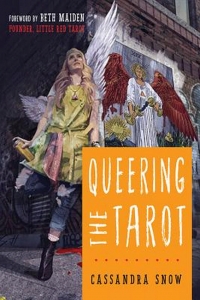 Cassandra Snow is among the most accomplished makers of queer theater in the Twin Cities, so you can just imagine, from that vantage point alone, she probably has a lot to say about spirituality that is worthwhile. You have the opportunity to mine her insights in her new book that re-thinks an enduring, albeit sometimes controversial, spiritual practice: The Tarot. Snow says, “Queering the Tarot is a great resource for anyone who wants to learn to read tarot in an inclusive LGBTQ+ way. For more seasoned tarot card readers, this book will help you re-examine and deepen your knowledge of the cards. Queering the Tarot is about presenting an alternative viewpoint to the tarot cards that our community has loved for decades and are now trendy. It’s also about collective healing and liberation. In addition to the book’s focus on tarot, personal storytelling and (consensually used) client anecdotes will inspire you to trust your gut and live your best life.” 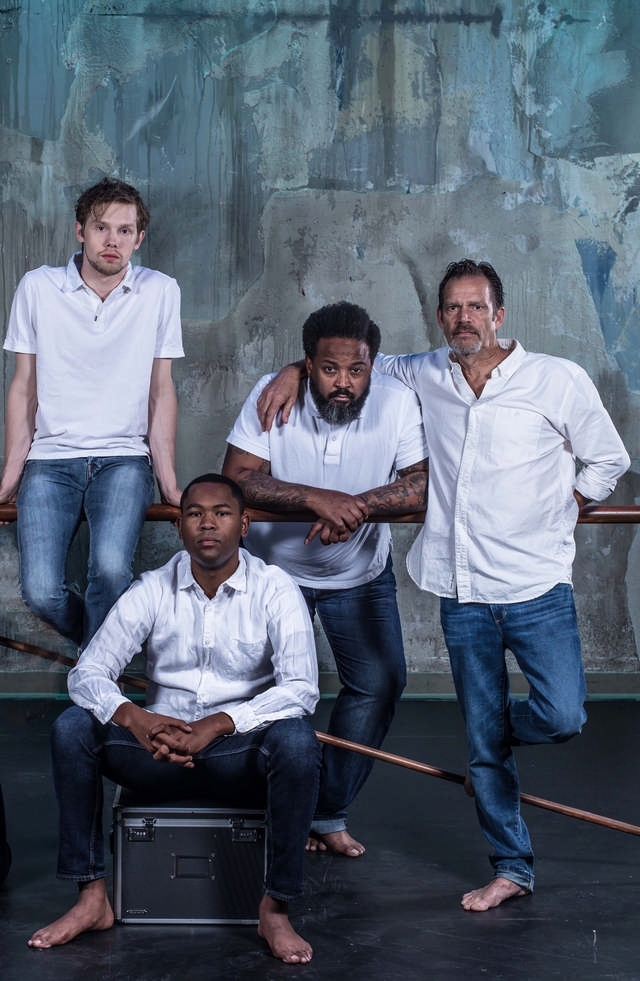 To Let Go And Fall. Photo by Allen Weeks

Experimental composer John Cage and experimental choreographer Merce Cunningham loom as two of the most innovative figures in 20th century performing arts. Gay men both, they were born half a century and then some before Stonewall. They also shattered the norms of what was conventionally thought of as music and dance. It comes as no surprise that they shattered the norms of what at the time were held up as conventional relationships as well.

Love letters sent between these two legends provided inspiration for one of the Twin Cities’ and the nation’s most dynamic young playwrights, Harrison David Rivers. Last year, Rivers struck gold twice. He gave us a stunning interracial gay love story, This Bitter Earth, staged at the Penumbra Theatre. As well as the book for Five Points, the wonderful Civil War-era musical that delved into race relations staged by Theater Latte Da.

Rivers’s newest piece, To Let Go and Fall, also produced by Latte Da, is where you can feel the spirit of Cage and Cunningham channeled through two dancers played by Conner Horak and Da’Rius Malone. Six actors of different colors play three generations of gay men in unison with the dancers. As you might imagine, since it spans a good space of time in the last century, the dreaded AIDS virus enters the men’s shared reality. To Let Go and Fall is clearly connected by the shared burden and pain of gay men across generations.

Harrison David Rivers reflects that “as a writer I find that I return again and again to the same themes, images and ideas. I call them my ‘preoccupations’—music and dance, intimacy, images and ideas. To Let Go and Fall might just be the most ‘me’ play I’ve written.” Original music by Jacqueline Ultan and Michelle Kinney, the renowned Jelloslave cellists, accompanies the production directed by Sherri Eden Barber. Choreography by Penelope Freeh.