Blood Knot
Through June 16
Pillsbury House Theatre, 3501 Chicago Ave. So., Minneapolis
(612) 825-0459
www.pillsburyhousetheatre.org
Athol Fugard’s two-character play Blood Knot broke ground when it premiered in Johannesburg in 1961. It portrays two brothers brought up by the same mother. One can be perceived as white. The other cannot. In the era of Apartheid, when whites and non-whites were racially segregated in South Africa, the oppression was severe. Opportunity was squelched. Unfair arrest was standard. Abuse was institutionalized against nonwhites. The darker one’s skin, the more stigmatized one was.
Blood Knot is also one of those special dream plays that theater artists have on their bucket list to interpret for a live audience at some point in their careers because the characters are so indelible. At Pillsbury House Theatre two of the Twin Cities’ top tier actors James Williams and Stephen Yoakam play the roles. Stephen DiMenna directs with creative consultation by Marion McClinton.
PHT Co-Artistic Director Faye Price points out that “for over a decade, Marion McClinton, James Williams, and Stephen Yoakam have dreamed of working on Blood Knot together. This season, Pillsbury House Theatre is honored to lay the stage for that dream to become reality.”
Yoakam gives an impression of his role: “Morris has returned to his brother after trying to “live in the world”. He returns weighted, wiser, damaged but not defeated. He know he has to try to find home – home with Zachariah, home with himself, some place where dreams are still possible in the night.”
Caught
Through June 2
Guthrie Theater Dowling Studio, 818 S. 2nd St., Minneapolis
(612) 377-2224
www.guthrietheater.org
Christopher Chen is one of the most interesting playwrights in action today. He is a man of our time as he teases out what is, what isn’t, what may or may not be reality. He has taken on the propaganda machine of Mao Zedong and has explored the loaded issue of diversity in democratic politics. He now turns his lens on the art and theater world in Caught. Chen has us consider the way we use categories and categorization in our reference to art and even into the examination of those post-show discussions so frequent in our system of publicly funded art.
Rick Shiomi directs the Full Circle Theater group for the Level 9 series based at the Guthrie Theater’s most intimate space, the Dowling Studio. He describes: “Caught is like an onion of truth with layers of reality wrapped around the core American experience. It begins with Lin Bo (Brian Kim), a Chinese dissident artist and his powerful story of being imprisoned for a single imaginary work of art. But then this dark comedy takes you on a roller coaster ride where  everything we believe in the play comes into question. From the first time I read the script I laughed aloud and admired Christopher Chen’s theatrical sleight of hand, as he cleverly hits us upside the head, to remind us to think before we believe.” 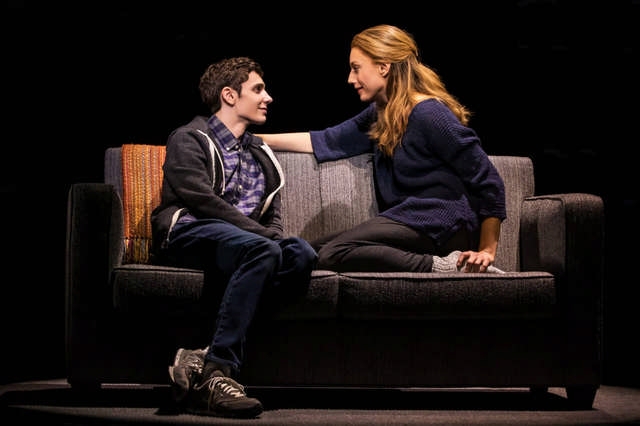 Dear Evan Hansen
May 28-June 9
Orpheum Theatre, 910 Hennepin Ave., Minneapolis
(800) 982-2787
www.HennepinTheatreTrust.org
A social anxiety disorder, a broken arm, and a fantasy friendship that a teenager fabricates to connect with the family of a boy who passed away are central to the winner of six 2017 Tony Awards including Best Musical. A fabricated email account and a phony suicide note drive young Evan deeper into a web of lies he has created. Song and lyrics team of Benj Pasek and Justin Paul of La La Land film fame and a timely sense of today’s teenage angst has made this a big hit and one of the most acclaimed examples of a particular trend in contemporary play-making. That trend has to do with themes of teenage alienation. Not to mention, Dear Evan Hansen hones into the issues of social media, which frankly affect everyone, no matter what their age. 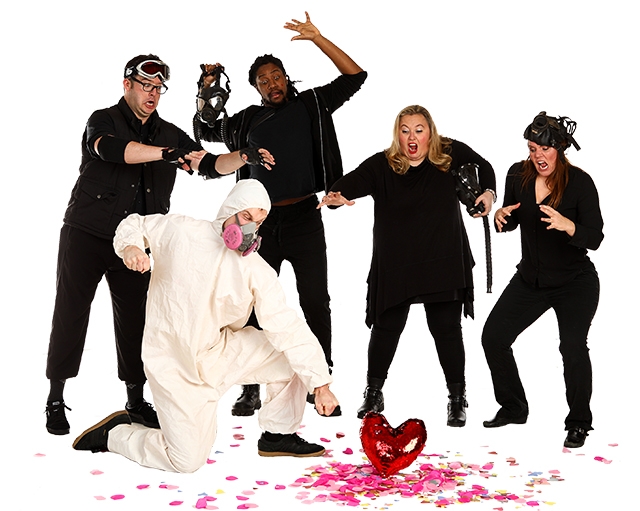 Love And Other Social Diseases. Photo by Dani Werner

Love and Other Social Diseases
Brave New Workshop’s 300th Comedy Revue
Through June 1
Brave New Workshop, 824 Hennepin Ave., Minneapolis
(612) 332-6620
bravenewworkshop.com
Mannerly protocols and traditions around sex and romance tumbled into confusion and derision a good half century ago. Some attribute it to the legalization of contraception. Some to the birth control pill. Some to Hugh Hefner.
In the 1990s, the internet hookup culture replaced the many-a single bar and many-a gay cruising area. The rosy theory that accompanied this was that you no longer had to navigate actual personalities encased in flesh and blood at the bar or the park bench. Awkwardness and messy interactions were to become, if not things of the past, at least more comfortable and less time-consuming. However, one wonders if people had a better handle on just who they were dealing with before the digital age.
The region’s premiere comedy theater is presenting their 300th comedy revue but you can’t help but sense that this collaboration is as fresh now as what you would have seen 61 years ago when it was founded. However, we can be sure that whatever was spoofed on the subject of sex would have certainly been very different from today. That was seven years before the Supreme Court’s Griswold v. Connecticut decision in 1965 which lifted prohibitions on access to contraception. And nine years before the Sexual Offences Act 1967 in which the British Parliament decriminalized homosexuality.
These were not so long ago. Yet in the 21st century, the ramifications have fleshed out in ways that can make us wonder if the Sexual Revolution was a benefit to humanity or not. We now seem to be as afraid of sex as we like to think those corny nuclear families with their white picket fences were in the 1950s. The genius of the BNW company collaboration of Love and Other Social Diseases directed by Caleb McEwen is how it exposes the outcomes of the sexual freedom era with a light and airy touch: illuminating and sometimes disturbing the audience, while entertaining. Whether this was its intention or not is anyone’s guess. However, the current era of zero tolerance and draconian affirmative consent makes one wonder: have social media and STDs made us self-conscious about sex to the point of erotophobia? And what does this bode for the future?
All that nervously said, you can’t help but laugh out loud with recognition at this cocky grouping of vignettes. There’s digital flashing which means close ups of the male organ sent out with the false impression that a woman will appreciate that. Wet dreams about co-workers you (think you) are not attracted to. Tom Reed’s hilarious use of a tongue condom illustrates the subliminal anxiety around sexually transmitted diseases—a concern that the production brings home with ironically gleeful abandon at points. And even absurd recollections of the details of one’s very own birth!
LAOSD is painfully accurate in its perceptions with uncanny characterizations that might make you wince with recognition of those from your own or your friends’ experience. Denzel Belin is stunning as a narcissistic social media cruiser and Heather Mayer is heartrendingly funny as a lonely and frustrated woman continually thwarted by a gnostic deity played by an all-knowing Lauren Anderson. She acts as much like a computer programmer as a goddess in keeping the mere mortal her from finding her soulmate. A passive-aggressive couple played by Reed and Anderson can’t help but make one another look bad in the eyes of others, rather than simply moving on. Yes, we laugh at their sarcastic darts at each other, but it’s impossible not to think how they’re fueling their own long-term bitterness.
Belin and Ryan Nelson, however, do find gay romance in a charmingly sweet scene where they break down socioeconomic barriers and hook up. Nelson and Anderson find hetero romance in the workplace and their way of finishing each other’s sentences is endearingly delightful. Nelson also delights as Bert the Chimney Sweep in a “Marriage Poppins” vignette where one of the jokes is that he can’t decide whether the character is Cockney or Aussie. Jon Pumper’s music direction vibrantly observes the spirit and rhythm of classic Broadway style and Matthew Vichlach’s technical direction is sharp as usual. 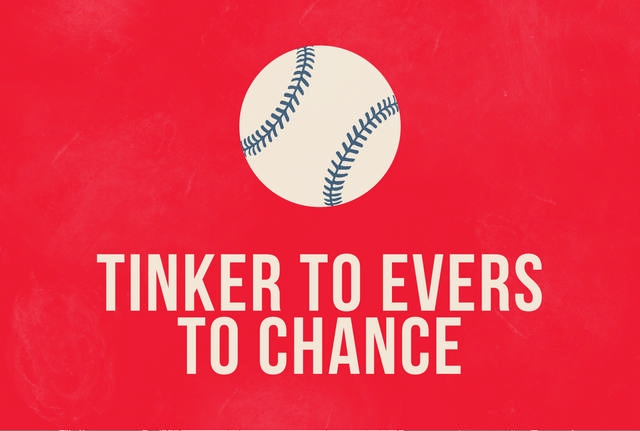 Tinker To Evers To Chance. Image by ArtsInk

Tinker To Evers To Chance
Through May 26
Artistry Black Box Theater, 1800 W. Old Shakopee Road, Shakopee
(952) 563-8575
www.artistrymn.org
This Chicago Cubs play is about a double play against the New York Giants by shortstop Joe Tinker, second baseman Johnny Evers, and first baseman Frank Chance. They were the subject of the poem Baseball’s Sad Lexicon by Franklin Pierce Adams and now of a play by Mat Smart on stage at Artistry.
Director Brian Balcolm says, “This is a play about risk and loss. In particular, how we process the sudden and unexplainable loss that takes our breath away and leaves us speechless. It could be the loss of love or of family or the person we once were. Not only do we process and reconcile these losses in different ways, we also need to find reasons to persevere and move on. Do we forget the past or carry it with us?”
He continues, “Mat has intertwined these themes with his undying love for sports, and set the play against the 2003 Cubs v. Marlins Game 6, i.e. the Steve Bartman Game. For us Minnesotans, maybe you remember those missed field goals by Gary Anderson and Blair Walsh. Some of us are still recovering from those unfathomable events. But on the other side are the Minneapolis Miracle and Kirby Puckett’s home run in 1993 against the Braves.”
Balcom sums up, “It’s always tricky to balance how much you invest into something or someone. The more you put in, the more you risk. Do you detach and protect yourself or go all-in knowing your heart will be destroyed every now and then? And when that happens, how do you pick up the pieces and try again? With every end, we hopefully find a way to move forward. We start every new relationship with the hope that it will be better than the last. We tune in on opening day wishing we’ll be better this year. We keep showing up because it’s worth it.”