Actually by playwright Anne Ziegler takes on controversy with a script that looks into accusations of sexual assault among college students for Minnesota Jewish Theatre. Director Harry Waters Jr. shares, “It’s a timely topic, addressing victim shaming, racism, exploitation by friends as well as institutions. Calls to address sexual assault are calls to address our entire systemic preoccupation with how justice is meted out, who listens, and what can the consequences mean in relation to class and privilege. This is not a play that has some simple solution. It means we need to be more informed about how to talk to ourselves, each other and our communities.” JuCoby Johnson and Miriam Schwartz play the roles. 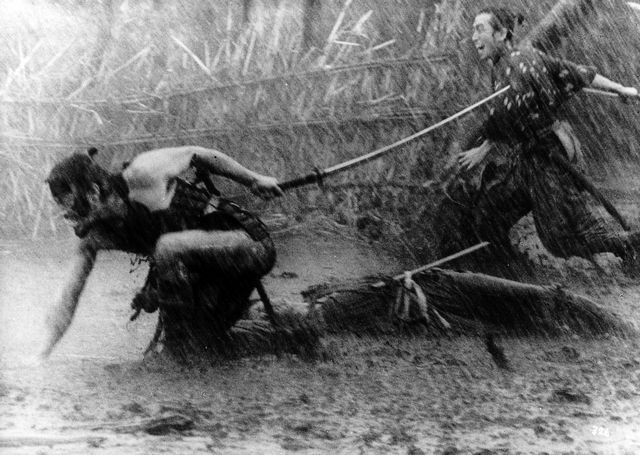 If there is such a thing as “settled science”,  the same could also be applied to art. It’s “settled art” that has placed Akira Kurosawa (1910-1998) in global reputation as the greatest classic Asian filmmaker. Moreover, his core actor, Toshiro Mifune (1920-1997), sits in the pantheon of the 20th century’s most iconic film stars. The two emerge after World War II, when the West still holds the men’s native Japan in understandably hateful contempt for their brutality and alliance with Nazi Germany. That both men would swoop into international respect a decade later is quite significant and a sign that it was time to heal the wounds of war.

Through the ephemeral power of film and portraying our shared humanity, Kurosawa pricked the conscience of European and North American critics and audiences with works that wrestled with the demons all of us wrestle with. His gorgeous black-and-white visions draw from medieval East Asian myth and from Western archetypes as well. The Trylon presents some of his major works in February.

Rashomon (1950) is considered to be a groundbreaker in film storytelling. It relates the story of a dead samurai told from the perspectives of four different people: the wife, a bandit, a woodcutter, and a medium who channels the dead man. Mifune plays the bandit. It also deals with the issue of rape. Feb. 1, 2, 3. Red Beard (1965) plays the same weekend along with Rashomon. Mifune plays a bitter doctor and was his final collaboration with the maestro of Asian cinema.

If you’re a Star Wars groupie, then you’ll want to catch The Hidden Fortress (1958), often compared to the George Lucas films (which he acknowledges). Rather than two lowly robots, two lowly peasants factor into the plotline. They become prisoners of war but escape after a prison revolt. From that point, Fate steps in to lead them to a mysterious castle. The man (Mifune) who guides them is in fact a general. Feb. 8, 9, 10.

Also screening the same weekend is Throne of Blood (1957), Kurosawa’s re-imagining  of William Shakespeare’s Macbeth. Mifune plays a 16th century general whose lesser self takes control of his soul. It was actually photographed on majestic Mount Fuji.

In Stray Dog (1949) a detective played by Mifune finds evidence that his lost pistol was used in several crimes. I Live in Fear (1955) has Mifune play a man so fearful of the hydrogen bomb that he tries to move his family to Brazil. The atomic bombs dropped in Nagasaki and Hiroshima ten years before they were clearly in Kurosawa’s mind. Both play Feb. 15, 16, 17.

Arguably, Kurosawa’s most revered of his many revered films is Seven Samurai (1954). This arresting tale of a village taken over by bandits and the men they hire for protection taps into the fear of the unexpected abruptly seizing a culture. Mifune plays one of the seven. Feb. 22, 23, 24. The Trylon does an admirable job of bringing in classic films from stateside and abroad so that they can be seen on the screen rather than the limited scope of video and television screens. We can fully see the visual compositions as the filmmakers first perceived them. 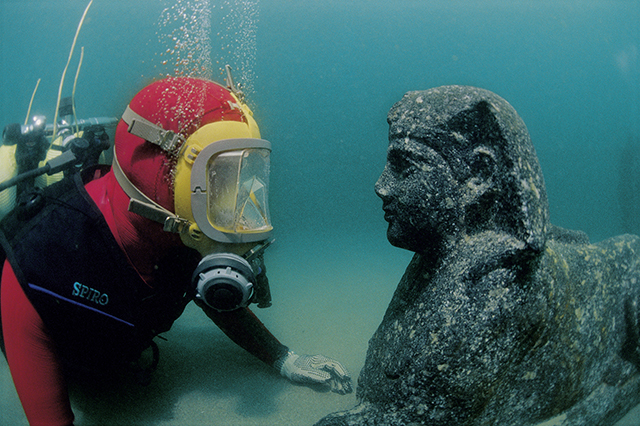 Stepping into the MIA’s Egypt’s Sunken Cities is stepping through a portal into a lost dimension. Over 250 artifacts discovered in an underwater excavation headed by Frenchman Franck Goddio cast a ritualistic spell. The Telegraph UK dubbed this underwater archaeologist a cross between Jacques Cousteau and Indiana Jones —an apt description for the man who explored Mediterranean waters to discover the lost cities of Canopus and Thonus-Heracleion (note the combination Greek and Egyptian names in the dual name of the latter).

A hauntingly transcultural dualism infuses the exhibit. Statues, religious stone work, ceramics, and jewelry embody a mix of Greek influence and earlier sacred Egyptian mystery concepts. You’ll see a statue found in Canopus of Serapis, which was a new god evolved from the Osiris myth when the Greeks came into maritime power.

Predating this, one striking piece relates the incestuous marriage between Osiris and his sister, Isis. The exclusion of their jealous excluded brother, Seth, was consequential in the fabled story of ancient Egypt. We as MIA visitors are privy to items that only the religious elite would have experienced millennia ago. The sacred ambience has been splendidly realized by exhibition designer Michael Lapthorn. 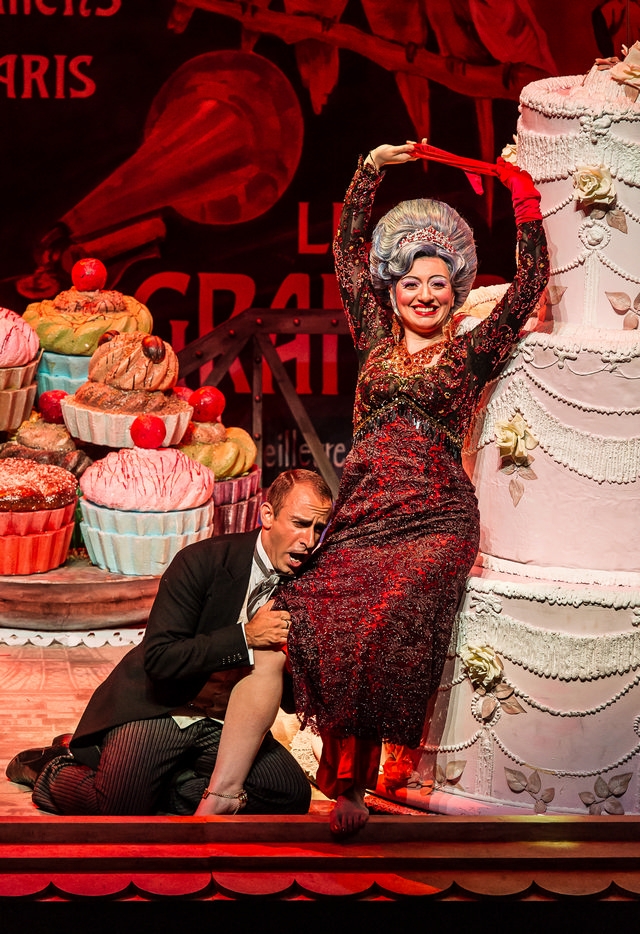 Anyone familiar with The Godfather films and those of Federico Fellini know of the glorious swelling beauty of Nino Rota’s music. He is considered by many to be the greatest film composer. However, Rota also gave us an opera. At the Ordway you can see set and costume designer Lorenzo Cutuli’s work in Minnesota Opera’s Italian Straw Hat. Cutuli says, “This production transfers the action to what has become, in the contemporary imagination, a nostalgic era of lost innocence. Costumes, sets and props evoke a sentimental, picture-postcard image of 1950s Paris, a concept that is encapsulated by the fact that the stage itself is an enormous postcard. Characters take on the guise of actors in a film, an intertextual reference to Rota’s day job.” 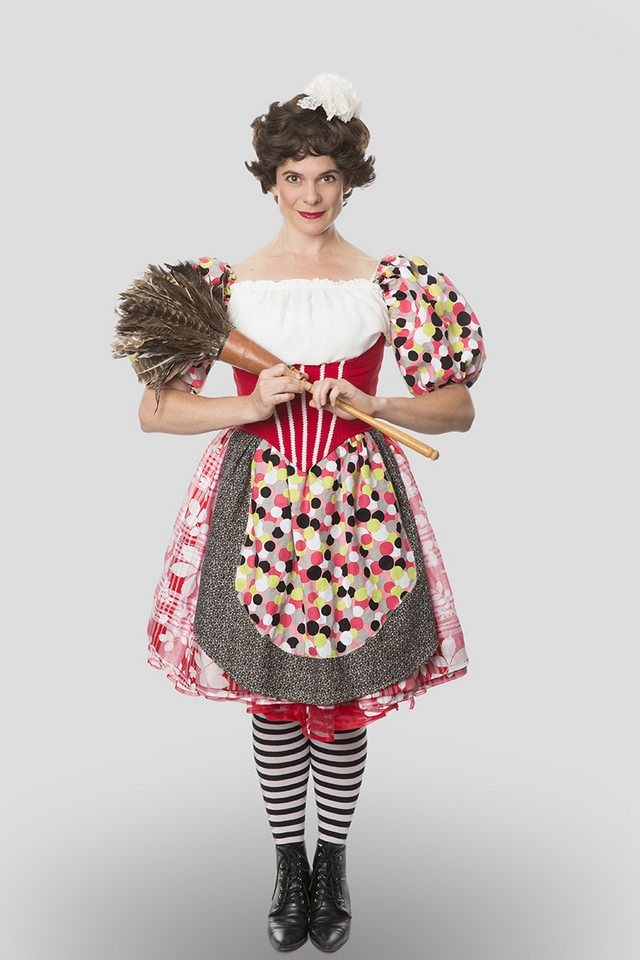 The Skin Of Our Teeth. Photo by Richard Fleischman

Girl Friday Productions continues its commitment to American classic plays with their revival of the epic comedy in which gay master playwright Thornton Wilder threw the rules out the window. The Skin of Our Teeth follows a nuclear family from the Stone Age to the decadence of Atlantic City to a dystopia of war zones and refugees. Yet through it all, the resilience of human beings still wins out. One of the play’s many great lines is: “We made it through the depression by the skin of our teeth—that’s true!—one more tight squeeze like that and where will we be?”

Director Joel Sass pointed out before the rehearsal process began that “so many people read the play the first time and cannot believe It was written in 1942. The Skin of Our Teeth still feels utterly fresh, edgy, funny, and topical—and if it were written this year it would still be worthy of its Pulitzer Prize. A particular joy of working on this production will be the double opportunity to collaborate with a handful of people I’ve known and grown with for nearly two decades—and another group of amazing talents I have admired around town but not yet worked with. Together we will tackle this ‘mammoth’ of a script and bring its humor, political critique, and optimism to a new audience.”