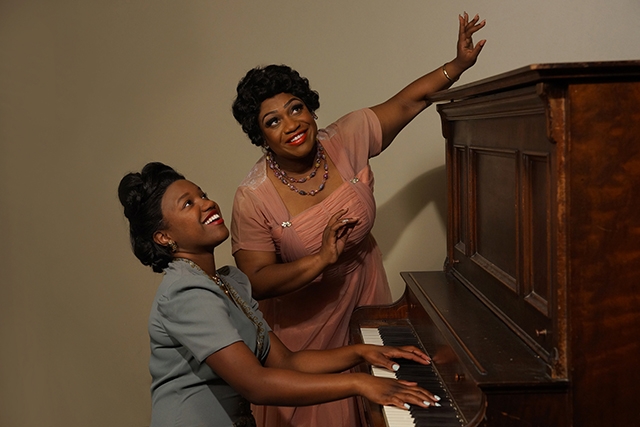 Sister Rosetta Tharpe (1915-1973) was an electric guitarist, songwriter, and singer, popular in the 1930s and ’40s. Her mix of gospel lyrics and a sound that presaged the rock ‘n’ roll of the ’50s is of great cultural significance. George Brandt’s play with music about Tharpe and her musical duo partner, Marie Knight, has its area premiere at Park Square with Jamecia Bennett and Rajane Katurah Brown in the roles. Musical director Gary Hines of the Sounds of Blackness guides the pair in such spirituals as Were You There When They Crucified My Lord? and Sit Down. You’ll also hear such non-religious tunes like I Want a Tall Skinny Papa.

Director Wendy Knox, fresh from her marvelous staging of Durrenmatt’s The Visit for Frank Theatre, is certainly a solid choice for staging Marie and Rosetta. She shares, “Rosetta was a powerhouse musician who had a huge influence on Elvis Presley, Chuck Berry, and Etta James, among others. She came to fame as a gospel singer, was a rival of Mahalia Jackson, then crossed over to secular music and was shunned by the church community. She married several times and maintained a longtime relationship with her musical partner, Marie Knight. Unrecognized for her talents, she had an enormous influence on rock and roll. What a treat to return to this great story in the very year when she finally got her due from the rock ‘n’ Roll Hall of Fame!” 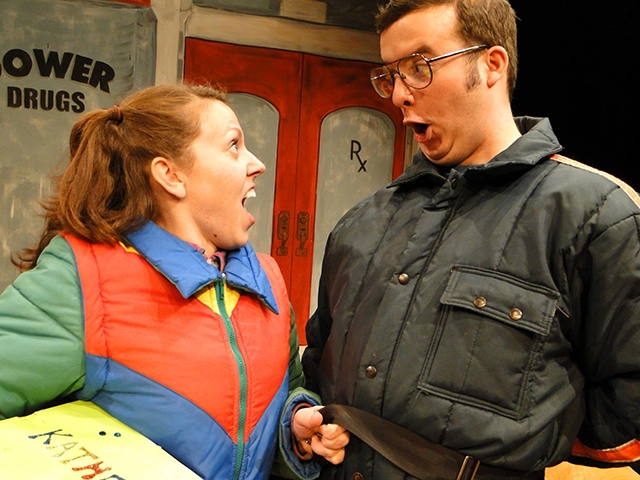 Yellow Tree Theatre in charming downtown Osseo has achieved the remarkable distinction of being the most accomplished small suburban professional theater. Their standard is right up there with the smaller theaters such as Park Square and Gremlin in St. Paul and the Jungle in Minneapolis. You can expect classics and recent major plays throughout their regular seasons, as well as original works. Their co-founder, Jessica Lind Peterson, a fine actress, singer, and playwright, has written this year’s holiday fare, drawing inspiration from northern Minnesota with Miracle on Christmas Lake.

Peterson relates, “During Yellow Tree’s first year, we were slated to produce Jacob Marley’s Christmas Carol but two weeks before rehearsals started the publishing company pulled the rights. So it was out of sheer desperation that I cranked out Miracle on Christmas Lake in two weeks. I was a new mom with a new theater in a new town, and the stakes were pretty high. Did I steal our own predicament and put it in the script? Yes. It’s about a couple who returns from NYC to take over a small Minnesota theater and they lose the rights to their holiday play. Are there forty-six references to Little House on the Prairie? It’s possible. Does a character named Martha own a massage studio called Hands Like a Man? Yes. Lucky for Yellow Tree, Miracle was a huge hit and sold out the entire run. Since then, I’ve written three more holiday plays and they continue to sell out every year. We now do 65 performances instead of our usual 26. It sounds cheesy but that play really was a miracle for us.”

Lind adds, “As a writer I have learned that my best work happens when my actual livelihood is on the line. What normally takes me one year took two weeks and I think it’s the best one out of the four holiday plays I’ve written. I didn’t have time to hem and haw, re-write and polish. I just said a Hail Mary, gave it to some brilliantly funny actors, and shoved it out on stage. It’s raw and silly and sweet. It has a sort of unbridled energy that audiences love. It’s very Minnesota with the tatertot hotdish, yaddy yadda. I never thought I’d make a name for myself writing holiday comedies, but I’m from Duluth so I have a lot of up-Northy material. I’m delighted it’s being put to good use.” 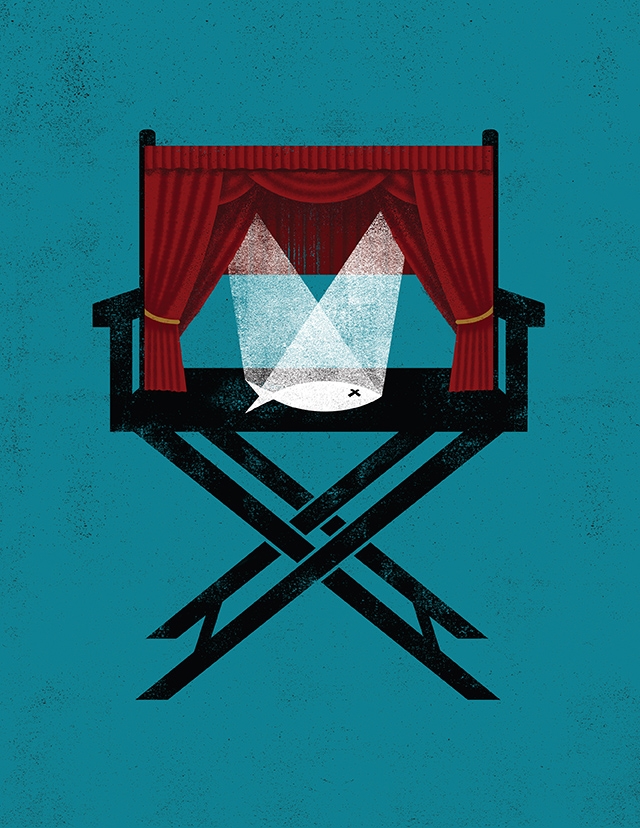 Noises Off, British playwright Michael Blakemore’s 1982 West End smash comedy, is possibly—no, probably—the most difficult play to ever pull off. It presents the run of a live stage production of a sex farce titled Nothing On, seen from three three different perspectives. The point is not to show the entirety of Nothing On, but stage how it is perceived. Act One takes place in a rehearsal. Act Two takes place at a matinee a month later. But the audience doesn’t see the actual play as an audience member, but from backstage, so that the frayed relationships between the actual actors and crew are the main action. Act Three is at the end of the run when the center truly holds no longer. The cast includes some fine actors with real comedy chops: Nathan Keepers, Raye Birk, and Sally Wingert, just to name a few.

Guthrie Artistic Director Joseph Haj shares, “I believe that Noises Off, in its brilliant construction, is the only truly great contemporary farce. The house of cards that Frayn writes into his script is astonishing, and I can think of no one better to know exactly how to build that house—and knock it down—than director Meredith McDonough.” Actors Theatre of Louisville, the major regional theater of the southeastern U.S. is where McDonough serves as Associate Artistic Director. She has also directed for Chicago’s famed Steppenwolf Theatre Company. Perfectly calibrated timing, pratfalls, pacing, and choreographed madness are what’s demanded of the director and cast of this slapstick milestone. 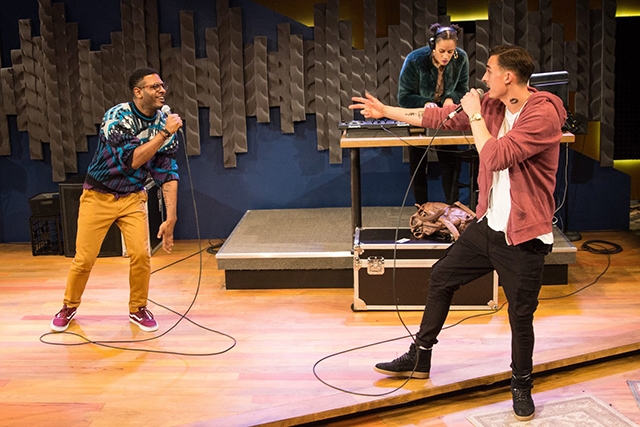 Mixed Blood Theatre is presenting three plays whose stated intention is to be provocative, right in the press information. African-American male experience is the connecting thread between the three, which run in repertory—that is, in rotating, alternating performances. Brandon Jacob-Jenkins, a two-time Pulitzer Prize finalist and Obie Award-winner in his 30s, has written a comedy titled Gloria. He weighs in on workplace divisions between millennials, Gen X, and the Baby Boomers in the rapidly disintegrating realm known as print media. The problem of who gets to tell whose story and who stands to profit from it are central themes. Jenkins is known for his originality as his plays are very different from one another.

Tearrance Arvell Chisholm is in his 20s and has written the comedy, Hooded or Being Black for Dummies. A street savvy lead character named Tru thinks another man, named Marquis, has lost his “blackness”. Cheerleaders, Black Lives Matter, 2Pac, Nietzsche, identity politics, and police issues infuse what is said to be a subversive work of theater. Ten years ago, Chisholm wrote a monologue which made an actor cry while working on it. He says this is when he became obsessed with the power of writing.

There’s also an acclaimed work titled Hype Man: a break beat play by Idris Goodwin, a playwright in his 40s. His play about philosophical divisions between two brothers, Bars and Measures, was acted to crackling effect at the Jungle two years ago—a serious examination of differences between two opposing life views. This proved Goodwin wasn’t held hostage to the mainstream media narrative that all people of a specific race or group march to the same drum. Indeed, Goodwin is someone willing to look at divisions within black communities squarely and forthrightly. He writes juicy vehicles for strong actors. With Hype Man, Goodwin has written a hip-hop trio of a frontman, a hype man, and a beatmaker. They’re about to break through as a show biz success when a police shooting of a black teen disrupts the groove. Questions of race, gender, privilege, and artistic freedom factor into what has been praised as an extraordinary work. Goodwin is the Producing Artistic Director of Stage One in Louisville and Boston’s Company One performs the piece. 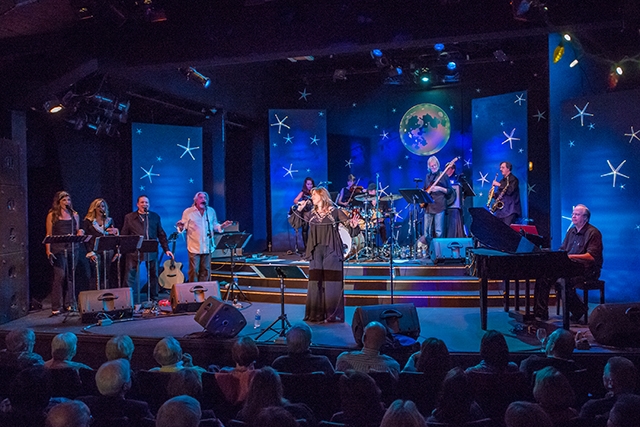 The Carpenters were synonymous with the 1970s. Their melodious and harmonic loveliness ran boldly counter to the rock ‘n’ roll and acid rock that had been ruling the airwaves. Perhaps, it was because the nation needed that gentleness, given soldiers brought home in body bags and civil unrest sprung from war and the civil rights movement. The Carpenters impelled us to get in touch with deep feelings that people were finally ready to give into. Aimee Lee and the Superstars present some of the brother-sister duo’s most wonderful tunes at the Fireside Theatre in the Chanhassen Dinner Theatres facility. 12 musicians and 12 backup singers will perform a variety of tunes including Close To You, We’ve Only Just Begun, Superstar, For All We Know, and Mr. Postman.

“Chan”, as it is nicknamed, is best known as the nation’s pre-eminent professional dinner theater and you can have a delicious meal at the Fireside beforehand, and if you haven’t quite finished before it starts you can eat and drink while the concert performs. On the Chanhassen mainstage, big Broadway shows are revived and given area premieres. However, the Fireside is their space committed to high-caliber concert work with a unifying theme. The music of the Carpenters is in alignment with the high quality musicianship grounded in works that have stood the test of time. This may sound very nice, which it is. But it’s really more than that. Those who endeavor to maintain classic traditions in our society are so often undercut by the impulse for what’s new, novel, and risky for the sake of being risky. Aimee and the Superstars along with “Chan” are making sure we keep the loveliness alive.