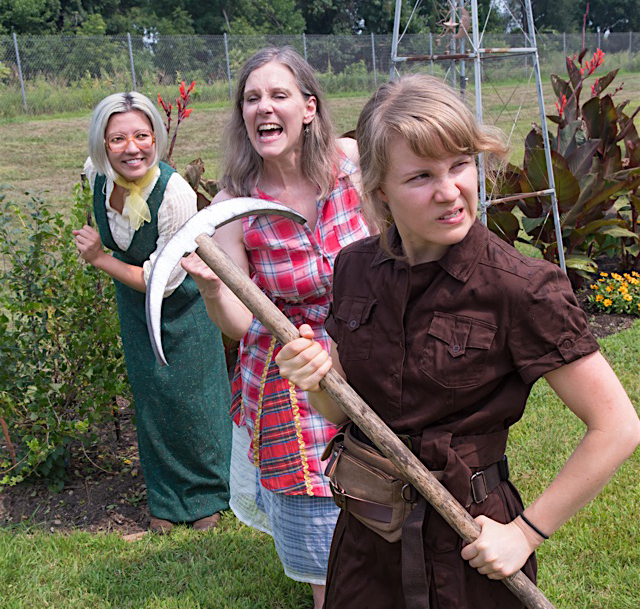 Dr. Falstaff and the Working Wives of Lake County. Photo by Regina Woolson

Dr. Falstaff and the Working Wives of Lake County: A Picnic Operetta
Through Oct. 7
Various locations in Minneapolis, St. Paul and Northfield
800-838-3006
mixedprecipitation.org

It may be your last chance to catch outdoor comedy before it gets too cold! Mixed Precipitation’s 10th Anniversary Picnic Operetta Production mashes up William Shakespeare’s The Merry Wives of Windsor, Otto Nicolai’s 19th century German operatic version of that comedy, Bruce Springsteen, and Minnesota’s economic history regarding the United States vs. Reserve Mining case.

Director Scotty Reynolds relates, “Our show places the silly characters of Shakespeare’s comedy alongside contemporary questions about industry, job creation, and the environmental impact of capitalism. Our version takes place on the North Shore of Lake Superior in a historic fishing community and mining town. Contaminated drinking water and a depleted fish population have led to a decade of legal battles with fishermen, environmentalists, and the mining industry. Bruce Springsteen’s classic anthems of working life and songs of love are perfect for the struggles of the time.” 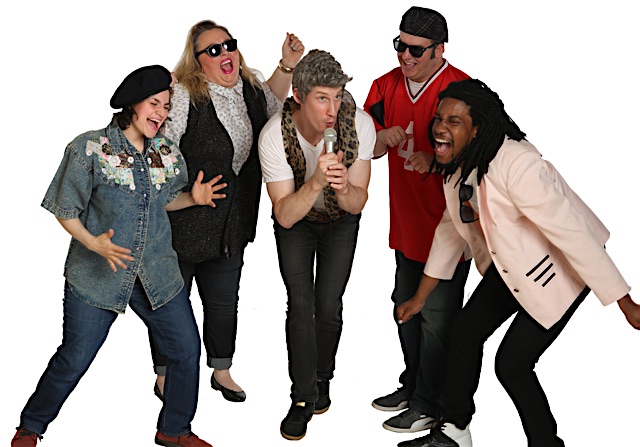 The Brave New Workshop has a knack for not showing favoritism, left or right, in most of their comedy reviews. Their current spoof on Robert Mueller’s controversial probe of the equally controversial Trump administration is an entertaining case in point. Rather than take sides by emphasizing Mueller’s entangled couples, Peter Strzok-Lisa Page and Bruce and Nellie Ohr, or spoofing the judicial fireworks erupting over maverick Trumpers like Paul Manafort and George Papadopoulus, director Caleb McEwen’s company-created collaboration takes a lighter touch.

Mueller is played by Tom Reed as a by-the-book uptight bureaucrat and Trump, as played by Ryan Nelson, is out of touch with reality. Both characters are conceived as living in their own personal bubbles. These approaches may actually be good ones given that fallout on both sides in real life seems to radically alter every few days or so. Therefore, given that this is a long-running show, it’s a smart choice and both actors are a lot of fun to watch. However, Nelson can afford to be more bombastic. That said, his Trump imitation reels in the giggles and smiles throughout.

However, it’s the vignettes beyond the Mueller probe that capture the essence of 2018 with rich farcical juiciness. They’re a time capsule of the Mueller/Trump era. In one witty scene, a straight white man played by Nelson is urged to claim falsely that he is racially part black, disabled, and gay. Unfortunately, he can’t bring himself to lie and therefore not only thwarts his own upward mobility but is actually labeled as straight white male bigot for not playing what is depicted as the diversity con game. A classy Denzel Belin, an actor of color, is wonderfully wry as part of the mixed-race group that turns on him. Delicious irony and frankly, it’s a brave scene at this particular point in time.

BNW revues always have some extraordinary scene that reaches into new territory which I sense comes organically and magically out of their collaborative process and not as some contrivance to be relevant. It’s uncanny how this tends to happen. In this production, Comedy Queen Lauren Anderson plays a New Ager who prefaces everything she says with “As a feminist” and is oblivious when Comedy Princess Taj Ruler as an everyday woman is understandably annoyed by it.

Ruler plays someone simply wanting express her anger as a woman and as a human being, but Anderson’s character is actually implicitly judging her for not being more serene. When she calmly says “namaste”, it’s not to be respectful but to be spiritually superior and passive-aggressive. Even the way in which the basic concept of “gratitude” has come to be corrupted by spiritualistic shenanigans factors into the conflict. It also reflects a dynamic playing out widely in our society nowadays, which media outlets are failing to perceive. The insight of this scene is pure cutting edge genius. Inspired.

The OBIE Award is the most renowned award for New York’s Off-Broadway theater. It is unusual for a play that has won an OBIE in a given year to then be staged within the same year in the Twin Cities. But that’s the case with Is God Is, for which Aleshea Harris won one of the 2018 prizes for Best Playwriting. Its themes of vengeance and disfiguration have drawn varied comparisons to Renaissance vengeance tragedies and even Spaghetti Westerns. Its violent goriness, which is portrayed on stage, has been compared to filmmaker Quentin Tarantino and playwright Tracy Letts. And its rage against misogyny brings to mind The Color Purple and Thelma and Louise.

Director Nataki Garrett is no stranger to plays that delve into the marginalization of women already marginalized. Her 2015 Mixed Blood staging of Pussy Valley was a riveting work about pole dancers. She is surely a strong choice to stage Is God Is. Garrett says it “explores the taboo of black female anger and the complexity of survival. It’s terrifyingly funny and absurdly violent. It’s about love and loyalty, sisterhood and rivalry.” The area premiere features Dame-Jasmine Hughes who appeared in Pussy Valley and who actually appeared in the recent OBIE-winning staging of Is God Is. Hughes was named one of last year’s Outstanding Lead Performances in Lavender for Penumbra Theatre’s Wedding Band. 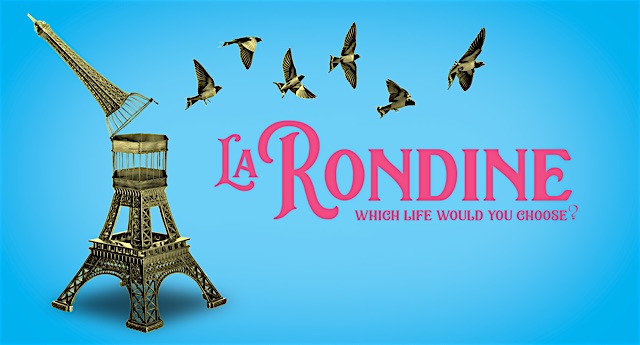 Stage director Octavio Cardenas states, “In this production we focus on two main themes: the ability of regret to shape our lives, and its power over the human spirit. Magda (soprano Celine Byrne), in her desire to pursue a reckless, passionate love affair, finds herself inadvertently learning that true love requires self-sacrifice and honesty. Our telling strives to express the power of what could have been.”

He continues, “Regret forces us to look towards our past, so we decided to present the story as a flashback, through the eyes of Magda’s memories at the outset of World War I. With war on the horizon, she finds herself inspired to live for the moment without considerations of the future consequences. At the end of the war, Magda relives this pivotal period in her life, and considers whether her decisions were the correct ones. She finds herself saddled with the question of ‘what if’—if she had the foresight, the knowledge, and the wisdom to have made different choices, and how that would affect the lives of those around her.”

The poet Magda loves, Ruggero (tenor Leonardo Capalbo), has his own aria—Aria di Ruggero—that sumptuously reflects the man’s artistically sensitive nature. La Rondine, like Romeo and Juliet, laments the anguished heart of forbidden love, a theme that our world always returns to every generation, like clockwork.  The barriers that society and our own inner nature put up is something we just can’t seem to get away from. 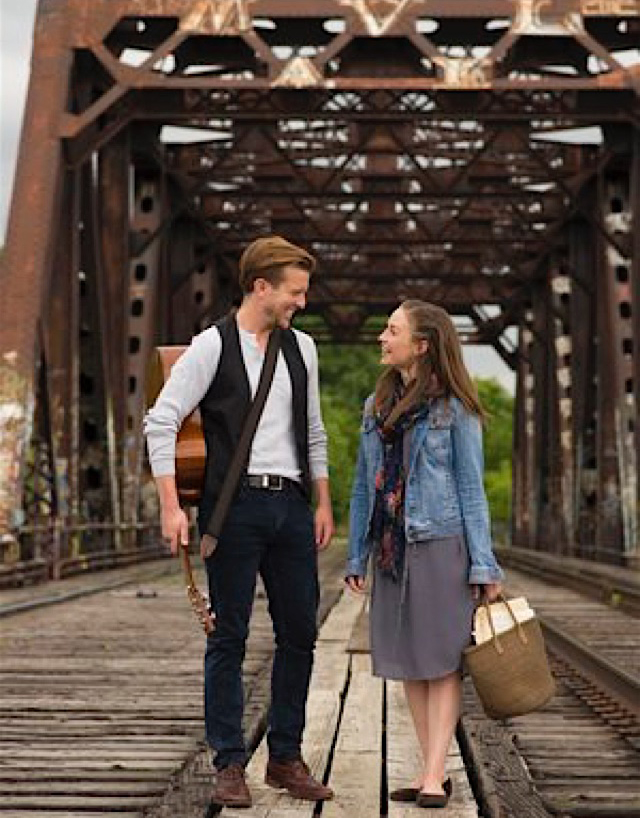 Once. Photo by Allen Weeks

An Irish busker and a Czech immigrant meet in Dublin and end up making beautiful music together. The winner of eight Tony Awards is having its first production by a local company, the celebrated Theater Latte Da. Director Peter Rothstein says, “Once is a sweet yet complicated modern-day love story, but at the heart of it is the power of music to transcend barriers based on culture, language and class.”

Music director Jason Hansen adds “Once is written for each member of the acting company to also perform as the orchestra, taking on the dual role of actor and instrumentalist. The rehearsal process has been uniquely complex, but the result is an experience that invites everyone—audience included—to participate in the soul of the show, which is music. We have an incredible ensemble that breathes all of their energy and joy into this gorgeous music that blends Irish and Czech genres.”

Actor Ben Bakken shares, “The beauty of Once is the depth of the music, helping us access emotions we otherwise can’t, bringing people together, and the multiple meanings of each song that is unique to each listener. It is very moving to be in the same room with all these amazing musicians who are acting, singing, playing an instrument, and dancing all at once.”