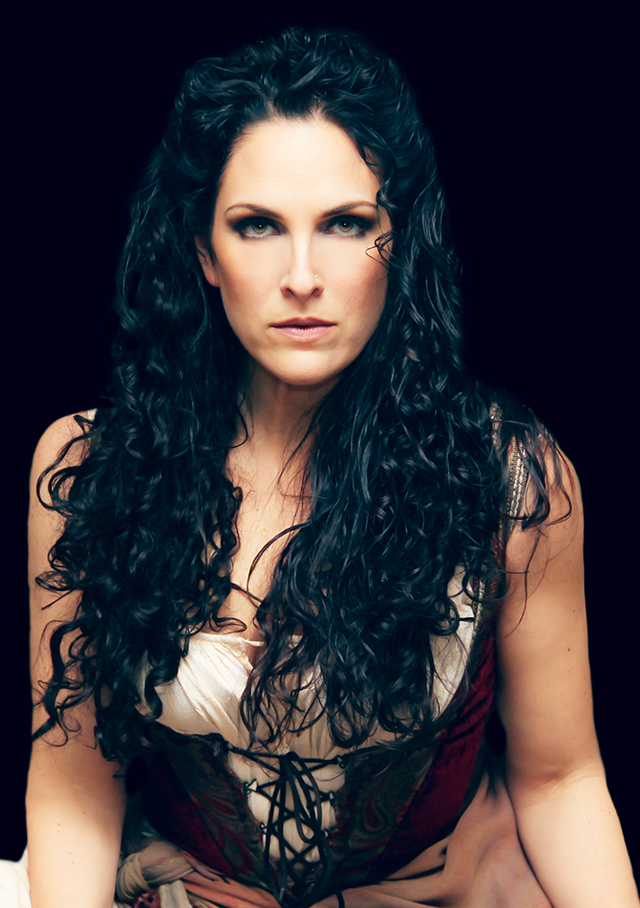 Georges Bizet’s Carmen is an opera that those who think they wouldn’t like opera will go to see and find out they actually love it. This beloved opera comique, or comic opera, set in 19th century Spain, exposes the weaknesses of the jealous Don Jose. He evades his military duties, as well as his fiancée, by falling for the woman who rates perhaps as the pre-eminent femme-fatale of all of opera: Carmen, the gypsy cigar factory worker. Mill City Opera’s production features Audrey Babcock in the title role and Adam Diegel as Don Jose. Fenlon Lamb directs.

Music director Brian DeMaris describes the music, well known to millions who aren’t even familiar with opera: “Bizet’s score is intricate and complex in terms of rhythm and orchestral color and seamless in its support of the French libretto. But what stands out most that has helped make Carmen such a long-lasting hit is melody. The audience will recognize moment after moment of iconic operatic tunes from the ‘Habanera’ to ‘Toreador,’ all written in support of the drama of the story but standing alone as iconic melodies that have become synonymous with the operatic art form itself.” 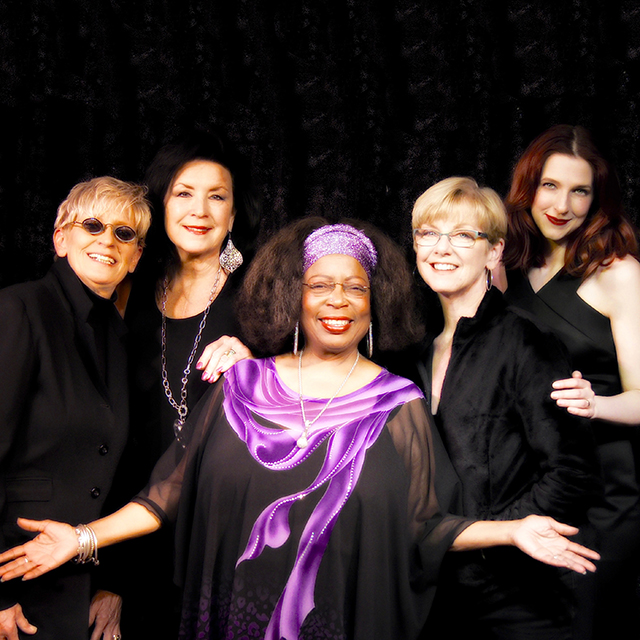 I Am Woman, Hear Me Roar. Photo courtesy of Chanhassen Dinner Theatres

Lori Dokken is a local legend of lounge music performance. Some of us, myself included, used to listen to her upstairs at the Gay ’90s. She truly bonded the community just as much as some higher profile gay folks more commonly known nowadays, not to mention she has always had great musical taste. Because of her talent and her taste, Dokken has always magnetized other great talent to perform with her. Therefore, it’s no wonder that she has assembled some fabulous vocalists for her concert series gig at the Chanhassen Fireside Theatre space: Debbie Duncan, Judi Vinar, Rachel Holder Hennig, and Patty Peterson. You’ll hear tunes originally sung by luminaries like Aretha Franklin, Judy Garland, and Christina Aguilera, among others.

Dokken tells us that “in looking at the inspiration for this, I have been keyed into showing off the vocals of the songs, more so than doing ‘cover’ versions. Some will be more acoustically delivered and some will have much fatter vocal harmonies than their originals. The diversity within the group of artists that will be presenting the music on these evenings is wide, and each will add their own special flavor and spice to the renditions that we end up bringing to the stage. There will be a lot of experiential ‘seasoning.'”

Ideation, a comedy by Aaron Loeb that satirizes groupthink, has garnered acclaim in New York and Chicago and makes its area premiere at the Gremlin. Director Brian Balcom points out that “while Ideation is first and foremost an entertainment, it does have two strong themes underneath. The first is the question of what it means to destroy a life and the different ways we’re affected by it. Is it worse to learn about a plane crash on the other side of the world or to watch a co-worker’s life slowly ruined by a long and messy divorce? Why does our distance from certain acts or events make it easier to digest human destruction?”

He continues, “The second and more important theme is one of conspiracy. With what’s been revealed about our elected officials in the past two years, theories that were once absurd and unrealistic now seem frighteningly plausible. A government turning on its own people has been happening for decades, centuries, around the world and now that it’s starting to happen here, being complicit in that—or even aiding it—is something we’re having to negotiate on a daily basis.”

Ultimately, “(in) this play, characters must choose between assisting what could be a monstrous act and destroying their own lives. The question of sacrifice does surface a bit in its later stages—how much we’re willing to personally lose to help someone else we don’t currently and will never know.” 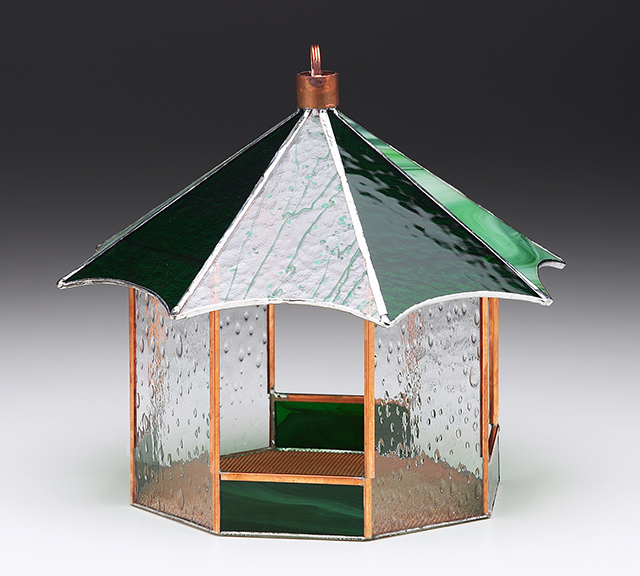 Home art pieces from 140 local and national artists will be seen and be available at the 19th annual Loring Park Art Festival: jewelry, printmaking, glass, fiber, photography, clay, painting,drawing, sculpture, woodworking and mixed media. One of the featured artists is Anne Hoffman, whose business, as she relates, “developed from a passion for feeding and watching birds for over 50 years, and my artistic skills and talents in working with stained glass. Creating functional bird feeders that are truly a work of art is a challenge; the challenge is not the size, but designing works that are functional for the birds and hold up to the weather, especially in Minnesota. I enjoy the three-dimensional projects, and using glass in a way that most artists don’t think of is fun for me. The process is to combine functionality and strength with the beauty of glass and copper. I created all of the designs myself then cut all of the glass and copper for the bird feeders by hand and solder with lead-free solder. Colors of glass are selected that complement each other, yet make an artistic statement in a garden.”

On the afternoon of the second day, the Apollo Male Chorus performs. Director Aaron Humble shares, “Apollo is pleased to be singing at the Loring Park Art Festival this summer. Our program will be drawn primarily from our most recent concert, Ticket to Ride, where the audience had the chance to shape the course of our travel as we went from destination to destination. Featuring songs from Ireland (“Danny Boy”) and the UK (“Down Among Dead Men”), Western and South Africa, and of course, the United States (“America the Beautiful”), the program promises to be as eclectic and beautiful as the visual art featured at the festival. As we begin our 124th season, the Apollo Male Chorus is thrilled to be thriving in such a culturally rich city.” 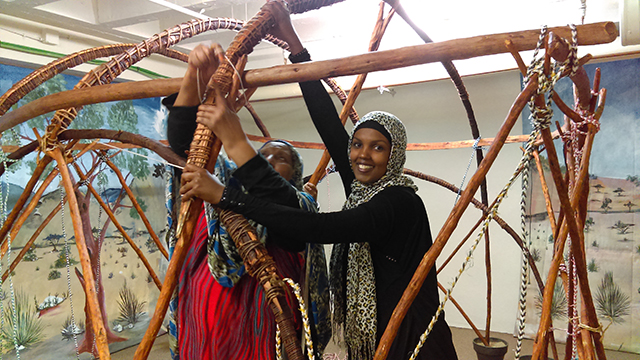 Do you know that Minnesota has the largest Somali population in the U.S.? It follows with the state’s history of refugee acceptance going back to the 19th century: primary examples include Scandinavians and freed black people who left the South after emancipation. In the late 20th century, Hmong refugees came to St. Paul, and in recent decades, Minnesota has been a magnet for those fleeing war and social destabilization of Somalia.

The Minnesota History Center, in partnership with the Somali Museum of Minnesota, has installed immersive settings, artifacts, photos and first-hand accounts of Somali immigrants. Osman Ali, director of the Somali Museum of Minnesota, says, “Many Somali people, especially youth, don’t know about their past because of the hardships they have faced fleeing the civil war. Seeing themselves in this exhibit will help them learn about their past, but also help them know that they belong here in Minnesota, a place they consider their second home.”