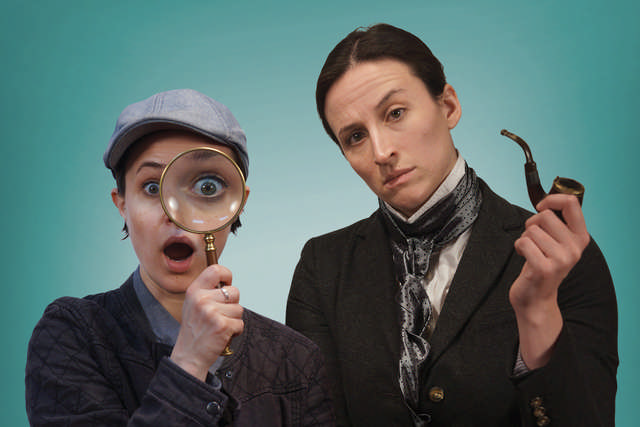 Though wildly different in style from the 1901-02 crime serial that became a novel, the play hews closely to it. When a man is found dead at a Devonshire estate, the eerie spectre of a supernatural canine becomes a suspect. A family curse, dating all the way back to the English Civil War when an ancestor cut a deal with Satan, is suspected to be at the root of the crime.

Director Theo Langason notes that “some Sherlockians will be skeptical of a woman in the role. But all the things we love about the character—intuition, ingenuity, intelligence—aren’t tied to gender. And when I saw McKenna’s audition, her performance was so grounded—which this script needs since the other actors jump from character to character.”

Dr. Watson has been described as the play’s “investigator on the ground” and as Langason adds, “Sara Richardson is so wonderful and I’m glad we get to spend so much time with her as Watson in this play.” This actress was named in Lavender‘s Superior Performances of 2013 for Pillsbury House’s Buzzer, which was performed at the Guthrie’s Dowling Studio.

Langason also adds context: “Sherlock is a fascinating character. He deserves a role in the pantheon of superheroes. I mean, without Sherlock Holmes, is it possible to have Batman? This show clips along with a very atmospheric, cinematic quality that I think will be really satisfying to both the artists and the audience. Peter Morrow (the sound designer) and I are working hard on where the sound comes from in the auditorium, trying to achieve the sensation your get in a surround-sound movie theatre. I want those ‘howls off the moors’ to give us all the heebie-jeebies!” 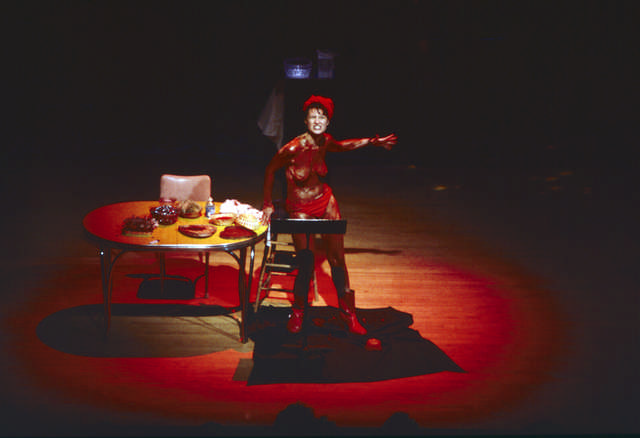 A Different Kind Of Intimacy. Photo by Dona Ann McAdams

To really understand the Twin Cities queer scene from a recent historical perspective, it is important to understand how the Walker Art Center shifted the focus locally to bring it more into alignment with the queer scene in other cosmopolitan areas. Moreover, it actually shifted the very discourse in the 1990s decade which began overarchingly with “gay” and “lesbian” as the terms primarily used in conversation and writing. As the decade moved on, the terms “transgender” and “genderqueer” became more embedded, as well as the acronym, “GLBT”.  (“LGBT” came into general use much later.)

The early 1990s was a time when Sen. Jesse Helms (R-NC) led a strong campaign against providing public funds for queer pieces and other art regarded as radical. This implicitly meant that during that particular period, HIV/AIDS themes and content were also singled out. The Walker was caught in the crosshairs of this for presenting heretical work and it became not only the dominant force in local queer culture, but it was also a highly visible queer-based participant on the national scene. That period is being reflected on in a Walker installation titled A Different Kind of Intimacy: Queer and Radical Performance at the Walker, 1990 to 1995. Video, photographs, and what is referred to as “ephemera” are showcased.

Curator Gwyneth Shanks relates, “The 1990s were an important historic period for the development of queer performance practice in the U.S. and for the Walker’s Performing Arts Department. For artists and for then Performing Arts curator, John Killacky, the larger context of the culture wars and the HIV/AIDS epidemic—both spurred on and exacerbated by the Reagan Administration—affected the types of work created and presented. The urgency of responding to the epidemic and to widespread homophobia deeply informed artists working across performance art, dance, and experimental theatre. Solo performance, for instance, rose to prominence as a form well suited to expressing the rage, grief, and pain artists experienced. While many of the performers included in the exhibit found support for their work at smaller venues in Los Angeles and New York—often specifically focused on LGBTQ art and community—the Walker was one of the few larger institutions that likewise presented such work. This is an important aesthetic, political, and institutional story to tell, and one which centers artists invested in the body as a medium through which to narrate particular stories and experiences.” 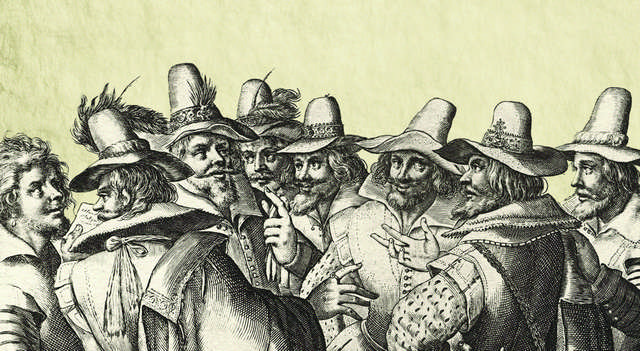 Two tremendous concerns of our time are terrorism and religious freedom. Walking Shadow Theatre Company reminds us of one of history’s emblematic events wherein these two concerns converged: the Gunpowder Plot of 1605 in protest of the persecution of Roman Catholics by the English crown. It was also a time when William Shakespeare, widely believed to have been a closet Catholic, had to tread delicately in his playwriting so as not to offend the reigning powers of the King and the nation’s official church. Since the formation of the Church of England by Henry VIII in the previous century, a reign of terror had been waged against Catholics.

Director Amy Rummenie shares, “In Bill Cain’s play, Equivocation, ‘Shagspeare’ (Damon C. Mentzer) is asked to pen the government’s official story of the Gunpowder Treason and Plot. With only the King’s version of the story to go by, he sets about trying to find the truth about a night when the newly crowned King James, his family, and all of parliament were almost blown to smithereens. Almost. But the King’s version has some wildly implausible parts, and we wonder which direction this conspiracy points. After this near-miss, Catholicism became synonymous with treason, making it even more dangerous for the faithful to live openly and safely. And dangerous for an artist to speak their mind in opposition to the state.” 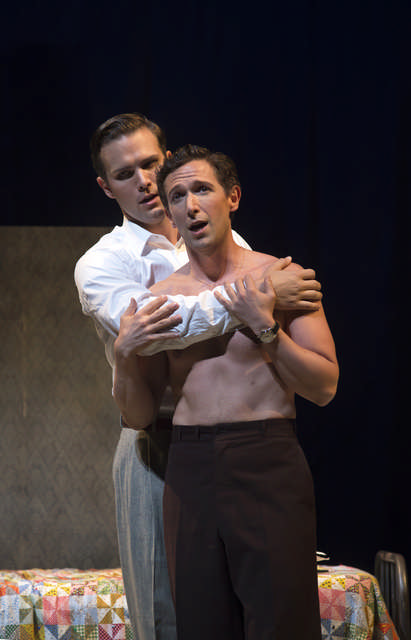 In 1953, President Eisenhower issued Executive Order 10450, which resulted in a ban on thousands of gays and lesbians from seeking federal employment, and over 5,000 working in the system already being fired on suspicion of homosexuality. The language of the order condemned “immoral, or notoriously disgraceful conduct” and “perversion” and carried with it an insinuation of mental illness. These broad strokes were enough to stigmatize and destroy innocent lives.

The Lavender Scare of the 1950s was a dark offshoot of the atmosphere emanated by the anti-communist McCarthy Era and the burgeoning Cold War. (Ironically, in the communist Soviet Union, gays were routinely rounded up into nightmarish gulags.) It is against this backdrop that Fellow Travelers, an acclaimed opera by Gregory Spears based on Thomas Mallon’s novel, spins a story of love and exploitation between two male lovers, Hawkins and Timothy. Hadleigh Adams and Andres Acosta play these men for Minnesota Opera under Peter Rothstein’s direction at the Cowles Center. This is a different venue than that typically used by the opera company. Daniela Candillari conducts.

Adams points out that his character is “confident” and “knows he ‘passes’ for straight”—using those qualities to his advantage. Adams also observes, “In Fellow Travelers, Hawkins does a pretty terrible thing to someone who he says he loves. Hawkins is very successful, gregarious, handsome, good at his job, and often fawned over. He’s attracted to men but views sexual encounters with random men as the totality of the gay experience for him. He doesn’t see any path forward to having a life with a man; living together, building a home; nor does he seem to want one. Now, of course, this is a pretty common viewpoint for a lot of closeted men in the 1950s, and to an extent, it’s easy to understand why. The way the LGBT community in the 1950s was treated was abhorrent, and for a powerful man who would otherwise have the world at his feet, the thought of falling to the very bottom of the social hierarchy would surely have been a petrifying thought. It’s easy with hindsight to castigate Hawkins for his weaknesses but from his perspective, he’s just doing everything he can to keep his head above water.”

At the beginning of the opera, Hawkins comes on very strong in pursuit of a man on a park bench. Adams points out “that because (Hawkins) knows that he passes for straight, he doesn’t have any fear of being found out, and can exude this gregarious sexuality with men or women at the flick of the switch. I feel that somewhere on his journey, when he was younger, Hawkins was really hurt by a guy he had feeling for. When you get hurt like that, you tighten your heart into a knot so you don’t have to hurt. As he’s matured into his 30s, he’s kept that viewpoint. It’s kept him emotionally safe from pain, and partly that causes him to be so closed off from the man he loves and the possibility of their very own home.”

Acosta plays Timothy, and as you will glean from his succinct comment, the way his character is abused by Hawkins is despicable. Moreover, when you see the opera you’ll likely be even more enraged as the story unfolds. Acosta shares, “Timothy Laughlin is a twenty-year-old Irish Catholic man who is living in D.C. in the 1950s. He is an intern for a local newspaper but dreams of working on the Hill like everyone else. Tim has a huge heart and is deeply passionate—almost to a fault. He is profoundly religious and feels a strong connection to God. Tim is kind, and a bit naïve.”

This sets the stage for Timothy’s first love affair with a man and how it becomes a cruel eye-opener. Fellow Travelers demonstrates how the political climate can affect how we behave toward those we hold closest to our hearts. It examines individual beliefs and fears, as well as society’s. 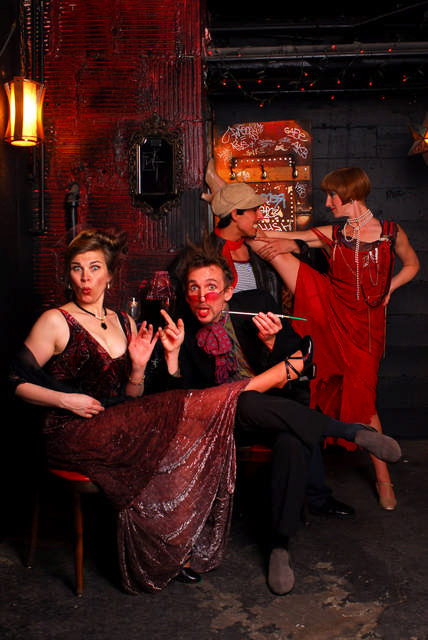 Iconic choreographer Joe Chvala and his celebrated Flying Foot Forum will revive a vibrantly outlandish work they performed at the Guthrie’s Dowling Studio ten years ago. This time, French Twist will perform at Park Square. Chvala originated the percussive work a decade ago. Aside from creating and choreographing this new incarnation, he will also play the Emcee and cabaret owner.

Chvala describes what we can expect: “French Twist escorts the audience to an epic night at a mythic late-19th/early-20th century French cabaret, Chez Jojo, where the lines between eras, styles, realities and genders get thrown out the door in favor of something more fluid, flamboyant, joyful and eye-poppingly beautiful to behold. It takes many of the most delicious ingredients out of the box where the cabaret clientele feel encouraged to be themselves on a very grand scale. There is a strong gay aesthetic created by which I have created.”

Chvala describes, “There are moments and characters inspired by Toulouse Lautrec, Edith Piaf, Gene Kelly, Leslie Caron, Loie Fuller, Picasso, the world of French art and cuisine and many other elements. The evening ends with a haunting song of love and regret sung by La Bijou, played by Brandon Jackson, the star of the club and then an extremely raucous can-can where everyone in the cast, no matter the gender or sexual orientation, spins and screams and leaps through the air dressed in corsets, wigs, heels, and can-can skirts.”