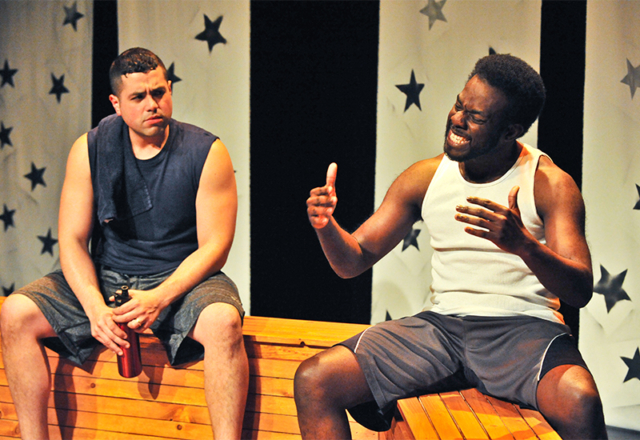 Noel Raymond directs five short plays at Pillsbury House by Christina M. Ham, Jessica Huang, Tim J. Lord, Stacey Rose, and Andrew Rosendorf with music by DJ Chanum. Among these, Rose’s work has queer content.  The playwright shares, “Sven, Ole & The Armageddon Myth is a ten-minute play about a group of coworkers stuck in an after-work hangout situation right before what will likely be a nuclear holocaust. The character Van, played by Audrey Park, is an edgy lesbian who is unable to care about anyone but herself or the quality of the drugs in the room. She’s a funny chick, but you definitely don’t want her to be the only shoulder you have to lean on, especially during a nuclear holocaust.” 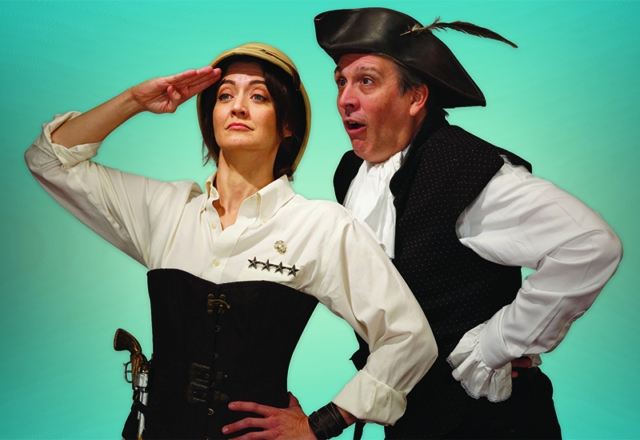 The Pirates of Penzance. Photo by Petronella J. Ytsma

Gilbert and Sullivan’s high seas romp, The Pirates of Penzance, is ideal fare for beating the late-winter blues. Hop on board a steamer to New York with madcap pirates, policemen, and lovers at Park Square. Actor-singer Bradley Greenwald tells us, “I’m playing both the Pirate King and the operetta’s composer, Arthur Sullivan. One role is an extrovert, the other an introvert. Sometimes they get played at the same time. I like that kind of challenge!”

The Gilbert and Sullivan Very Light Opera Company is out to tickle your funny bone, to get you thinking about the fluidity of desire, and to muse over how both sexes could stand to be more aware of how they embody gender roles. The vehicle is Princess Ida, inspired by the Alfred, Lord Tennyson poem. It is staged with a “steampunk” concept that revels in the 19th century futuristic vision of steam-powered technology.

Director Joe Andrews points out that “while ostensibly Princess Ida is a satire of feminism in Victorian England, male chauvinism takes as many or more barbs in the play. The real fun—aside from particularly beautiful melodies and delicious lyrics from Sullivan and Gilbert respectively—I think, is the ability to play with gender stereotypes and conventional expectations. When the three male leads dress as women to gain entry into Ida’s all-female college, we’re afforded the opportunity to explore both sexual and romantic attraction and gender in a way that was likely taboo—or at least understood—in 1880. In our production, the prince embraces his new female persona. In a way, this ‘mask’ is freeing for him. New to our production, too, is that the princess finds herself attracted to the new female recruit. The result is that they are able to explore their mutual attraction and ensuing confusion and excitement, regardless of gender. This is given more poignancy with the added lines from Shakespeare’s sonnet 116: …love is not love which alters when it alteration finds.”

The English Renaissance is a watershed period for the emergence of crossgender stage representations. Classical Actors Ensemble is presenting one of the most famous works reflecting that during that era not written by Shakespeare. The Roaring Girl by Thomas Middleton and Thomas Dekker was written circa 1610 (during what’s known as the Jacobean period of King James I) and its lead role of Moll Cutpurse gives us a woman who defies gender roles with gusto.

Lead actress Meredith Kind relates, “Moll seems to identify as an independent or an asexual: someone who identifies as female and dresses sometimes in the more common wear of women, other times in a mix of men’s and women’s fashion, and still at other times dressing fully in men’s clothing. It’s utterly refreshing to play a classical character who is in no way searching for or involved in a relationship of any kind. In fact, she says that she considers herself ‘man enough for a woman.'”

Kind points out that Moll “is self-sufficient, self-reliant, and yet, while she condemns the dastardly and common mistreatment of women, she is also harsh on the women who don’t stand up for themselves like she has done.” 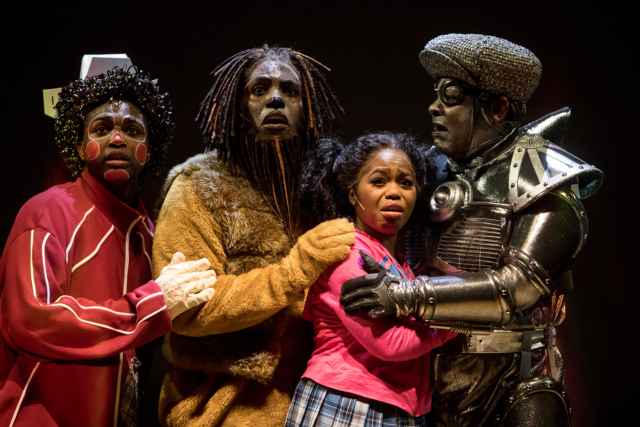 The Wiz. Photo by Dan Norman.

Director Lou Bellamy, renowned for his exceptional productions of heavy drama, has never had a lighter touch. With The Wiz he is actually a revelation. The pacing is continuously brisk, the acting style charmingly heightened, and the overall effect uplifting. Paris Bennett leads the stellar cast as Dorothy, the Kansas farm girl transported to Oz by cyclone. Though Bennett pushes the emotion a bit too much in moments, she is a terrific singer and guides the storyline well.

Music Director Sanford Moore’s orchestra creamily glides the sound into the beautiful groove of “Soul”, as The Wiz’s original subtitle suggests: The Super Soul Musical “Wonderful Wizard of Oz”. The sound streams into dreamy alignment with Patdro Harris’s choreography. The dazzling way in which sensuously whirling dancers signify the cyclone is one of many indicators of just how creatively inspired the entire ensemble is.