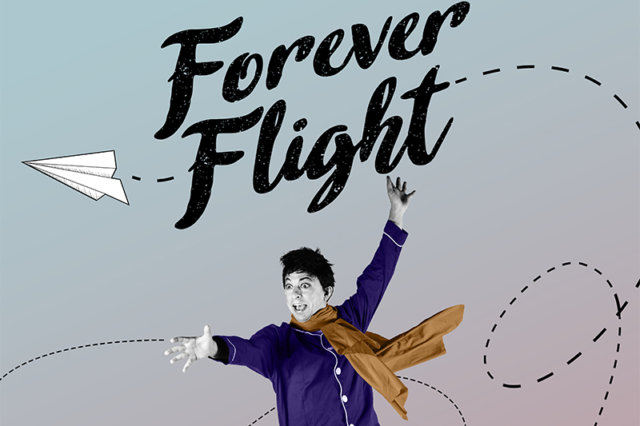 Animal Engine takes classic literature and turns it on its head with minimalist staging and expressive physicality. With Forever Flight, solo actor Karim Muasher is inspired by Antoine de Saint-Exupery’s novella, The Little Prince, and Windsor McKay’s comic strip, Nemo in Slumberland. Ryan Underbakke directs this whimsical tale of a boy and his paper airplane.

Muasher shares, “Entering into the mindset of a child, with their limitless capacity for play and imagination, is a complete joy for me as a performer. There’s so much freedom there. When I’m rehearsing, I try to think of myself as a living cartoon, where anything is possible. No idea or impulse is too farfetched. The world of adults is bound by so many rules, but this character is having none of that.” 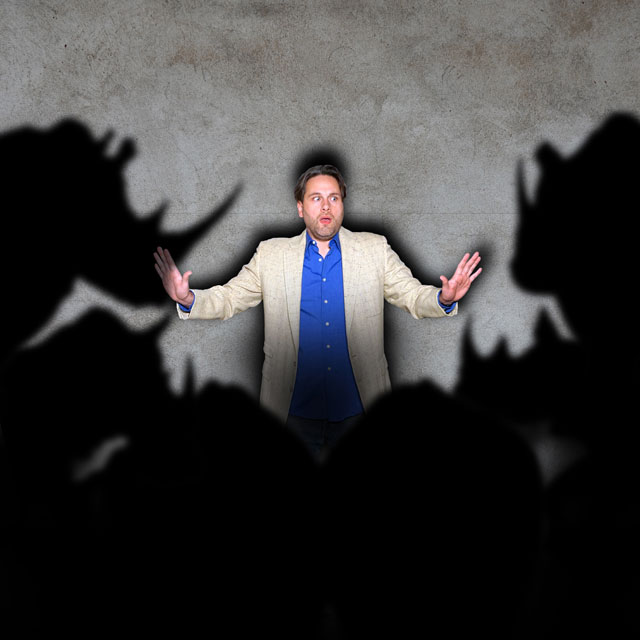 You’ve probably heard the term “Theater of the Absurd.” This refers to a type of staged drama or comedy that uses incongruous and illogical actions and images to tell an atypical story—in all likelihood, very atypical. The narrative might be stream-of-consciousness or a wild idea taken to ridiculous extremes. The genre first struck with full force in the mid-20th century; however, its effects have become so pervasive that we may not recognize them when we see them on screen or stage. When you examine the standard classic and hit plays of that time, you’ll tend to find what were regarded as attempts at so-called “well-written” plays. So when you come across an absurdist work, you are struck by the bold contrast.

In 1959, Romanian-born Eugene Ionesco (1909-1994) wrote one of absurdist theater’s shining gems, Rhinoceros. The protagonist is a regular guy who doesn’t rock the boat or stand out in any significant way, until everyone around him starts to change into a rhinoceros except him. Another way of putting it is that everyone loses their grip on reality except him, leaving the audience with the idea that he is the only one who is actually perceiving the downfall and disintegration of his society.

Rhinoceros is generally held to be a comment on the rise of Nazism which had begun roughly a quarter-century earlier. When societies shift into totalitarianism, they have a way of overwhelming the rational capacities of the individual citizen. Hence, Ionesco was known to have pointed out often that he was all about defying conformity and that the individual artist ought to do so. He preferred the term “Theater of Derision” rather than “of the Absurd.” Having lived much of his life between Romania and France, he witnessed some of the 20th century’s most consequential upheavals firsthand, and was as harshly critical of communism as he was of fascism.

Nowadays, Rhinoceros is entrenched as one of the major plays of the past hundred years. Theatre in the Round Players has continually produced major plays of Western culture for 66 years, spanning all genres. Odds are their interpretation of Ionesco will be in the spirit in which it was written. 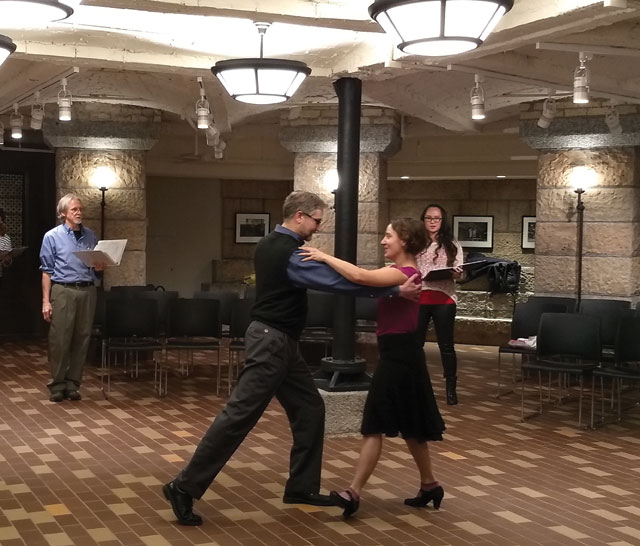 Our House: The Capitol Play Project. Photo by Leah Cooper

The Walker Art Center’s Out There Festival of boundary-crossing performance has turned 30 years old. For three decades, Out There has been the “go-to” alternative performance festival in the Upper Midwest, offering audiences cutting-edge avant-garde work from beyond the Twin Cities and sometimes beyond American borders. This year, diverse pieces from Cuba, Canada, New York, and Great Britain provide a dazzling spectrum that will be well worth attending. Most are performed at the Walker Art Center itself.

The series begins with Havana’s Teatro El Publico. Provocative director Carlos Diaz draws from one of world drama’s seminal works, Antigone by Sophocles. Highly physical actors dressed in absurd costumes deliver an internationally acclaimed and dynamically paced re-imagining of the ancient Greek story titled Antigonon, un contingente epico (Jan. 4-6). Archival news footage connects past and present. A great opportunity to get a sense of the social upheaval that has been happening in contemporary Cuba.

Montreal is one of North America’s major centers for the arts, so as you might imagine, some stellar work comes out of there. Choreographer/performance artist Dana Michel presents Mercurial George (Jan.11-13), in which she wanders through heaps of debris in a search that puts her in touch with notions of personal identity and alternative identities. Moreover, she journeys into alternative realities as well, not to mention new emotional states that surface as she examines what may actually be underneath her own persona. The movement is minimalist and the piece has been described as haunting, comical, and heartbreaking.

The company 600 Highwaymen hails from New York’s downtown theater scene. The Fever (Jan.18-20) explores themes of individual and collective responsibility. It asks about how willing we are to be available for other people in a time when society seems to be divided into factions and fragments. The audience interacts with the performers (participation optional) as it inquires into how people assemble, organize, and care for those around them.

Out There concludes with two pieces by the UK’s acclaimed Forced Entertainment experimental theater troupe. Real Magic (Jan. 25-26) uses sound-looped applause and concepts inspired by cabaret acts and game shows. Defeat, hope, and anticipation are themes that recur throughout. The British group also performs their darkly comedic Quizoola!, considered by some to be a classic of the avant-garde. This six-hour marathon plays at the Soap Factory (Jan. 27). The performers ask questions that are personal, philosophical, and trivial. Audience members can come and go as they please. Once again, Out There breaks down barriers we may not have even realized we had and re-imagines ways in which we encounter live performance.

Playwrights and co-directors Alan Berks and Leah Cooper have been researching the actual lives and personalities of those who dedicate themselves to public service in the People’s House, the Minnesota State Capitol. It portrays a wild card governor who comes to power, and the chaos that subsequently ensues. The performances will actually be performed at the Capitol building. Presented by Wonderlust Productions.

Berks shares, “Three years ago, we thought it worthwhile to look beneath the partisan headlines at the people who have to make the government work for its citizens every day. We didn’t know what we would hear, we didn’t have any particular axe to grind. After listening to stories from more than a hundred civil servants, lobbyists, legislators, media, activists, tour guides, and more, we think that an open-hearted knowledge about the efforts people make to create good outcomes for all Minnesotans is even more worthwhile. Over the course of the process, Our House: The Capitol Play Project has developed into a play about the invisible parts of the process and the invisible people within that process—both in terms of the behind-the-scenes workers and the people who haven’t easily found access to power at the Capitol.”

He continues, “When we asked government workers to describe a moment where they really felt like they understand why they worked at the Capitol, where they really felt they belonged and were doing the kind of work that made them feel fulfilled, more than a few of them described the scene at the Capitol when marriage equality passed. The emotion was so palpable that day, the way in which they could see how people’s lives were directly affected by the work that they did, it made an impression on people—even those who weren’t on the side of the bill. Aspects of this story are repeated in both the first and second act of the play—especially in the second act when our hero asks the chorus to rise above their cynicism.”