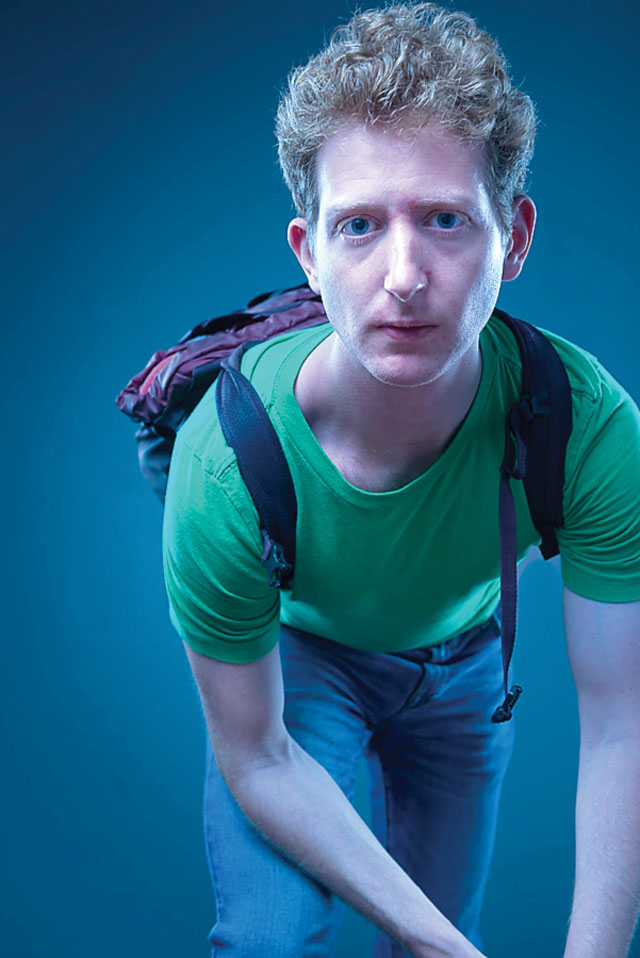 The Curious Incident of the Dog in the Night-Time. Photo by Rich Ryan

Theater for persons with disabilities has made itself felt in the Twin Cities for many years now. Mixed Blood Theatre, which began its mission four decades ago for racial and ethnic inclusion, further expanded its reach into dealing forthrightly with disability issues as it evolved. The theater, known for its old firehouse venue, is presenting the Olivier- and Tony-winning The Curious Incident of the Dog in the Night Time by Simon Stephens from the novel by Mark Haddon. MacGregor Arney plays the lead role of Christopher, a youth with autism.

Founding Artistic Director and director for this production itself, Jack Reuler, relates his company’s evolution: “In 1999 I was introduced to Interact (a local groundbreaking theater for persons with disabilities) and realized that we at Mixed Blood had been remiss in not incorporating disability into the manifestation of our mission. Since then we have been vigilant in becoming the theatrical destination for people with disabilities. For 18 years we have pursued that through programming, staffing, services, and facility.”

He continues, “We have produced four prior productions focused on autism: Vestibular Sense (2006), Theory of Mind (2009), On The Spectrum (2011), and Orange (2016). A common theme of these productions was that they didn’t say the word autism, that they approached it from a difference (not disorder) model, and that they dealt with the advantages and challenges (not deficits) of ASD.”

After having read Haddon’s novel, Reuler says he started writing the National Theatre of Great Britain in 2012, then contacted the commercial Broadway producers in 2014, saw the show on Broadway and on tour at the Orpheum, and finally procured permission to produce it a year ago. He attributes this partly “to the benevolence of the Guthrie.”

Reuler says the play “could be done with actors and a bare stage or with great technical support. I felt that the Broadway show allowed us to watch Christopher, the protagonist, travel through the world and we hope that our production will allow the audience to experience this fantastic tale through his eyes and in his brain.” 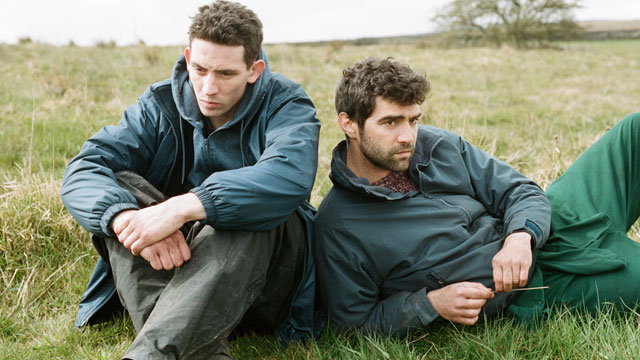 God’s Own Country from first time feature filmmaker Francis Lee is a defiant breakthrough in gay cinema. Not so much for its gay themes, but in its gritty rural setting, as opposed to the urban, hip, and genteel spaces that have come to be standard for gay film fare and its audience. It doesn’t cede an inch to the gay male cult of physical beauty, or cleverness, or positive imagery in service to “making us feel better about ourselves.” It goes for the jugular with raw, ugly, liberating truth.

Lee gives us a crude and coarse protagonist who is not only downright unlikable for the first half of this film but also is not cut out of GQ or Details. We are shown grisly aspects of working with livestock, whether it’s reaching up inside a pregnant cow to estimate a birth arrival time of a calf or the skinning of a lamb.

Unbearably unhappy Johnny Saxby (an Oscar-worthy and visceral Josh O’Connor) is committed to keeping the Yorkshire family farm running despite a seriously ailing father (Ian Hart) and an overworked grandmother (Gemma Jones), both of whom are stranded in bitterness. Johnny’s plight is especially poignant since it is half a century since the UK’s watershed Sexual Offences Act, not to mention Stonewall which came soon after that. It is present day and he is dutifully committed to his aging loved ones’ livelihood. Coming out for him is not an option and not, as some would ricochet to say, because of “self-hatred.” For all his faults, he is loyal to family. Nonetheless, resentful, self-sabotaging Johnny compensates for drudgery by binge drinking and brusque anonymous sex with men.

When Romanian Gheorghe (a consummately endearing Alec Secareanu) is hired on at the farm, macho Johnny sees him as a racial inferior. He calls him a gypsy. But when life gets rough we are compelled to shed our prejudices for the sake of survival. God’s Own Country is about that tormented crucible or eye of the needle the four characters must endure/pass through to address their crises. Gheorghe has the expertise and vision this family farm desperately needs. Secareanu goes to a space so deep he could rip your heart out.

Hart is heart-wrenching. The miraculous Jones vividly grapples with the grandmother’s debilitating hard edge. If only Tarell Alvin McCraney could have mustered half of the empathy for the grotesque mother he writes with misogynistic venom in Moonlight that Lee does for his script’s grandmother. Lee makes her redeemable without sentimentality. Jones is magnificent.

The immigration issue is addressed organically, as opposed to hyperbole, in a bigoted action at a pub. There is also a betrayal that cannot be blamed on homophobia, but by a gay man’s willful negativity. With God’s Own Country we experience a primal view of life wherein male-to-male love is as ruggedly natural as the earth itself. This masterpiece borders on the biblical. 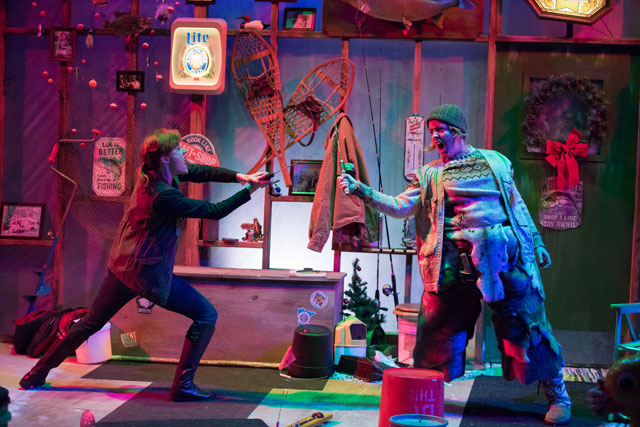 Playwright-director Jessica Lind Peterson on her Christmas show in Osseo: “Growing up in Duluth I spent a lot of time at my family’s hunting shack, cabin, and ice house surrounded by die-hard hunter and fisher men and women. All of my holiday plays have that ‘up north’ flavor to them, and A Gone Fishin’ Christmas might be my favorite. It’s about two sisters, one who moved to the Cities and is now trying to reconnect to that gritty, woodsy part of herself, and the other who never left Duluth and is so immersed in the outdoors she wears animal pelts. I love telling stories about weird worlds colliding. That’s where the funny comes from, and this play is really a love letter to Duluth and my crazy flannel-clad family. We even cast real live Duluth actors to make sure it’s the real deal. Duluth is in my blood and I miss it terribly, so writing about it is my way of coming home.” 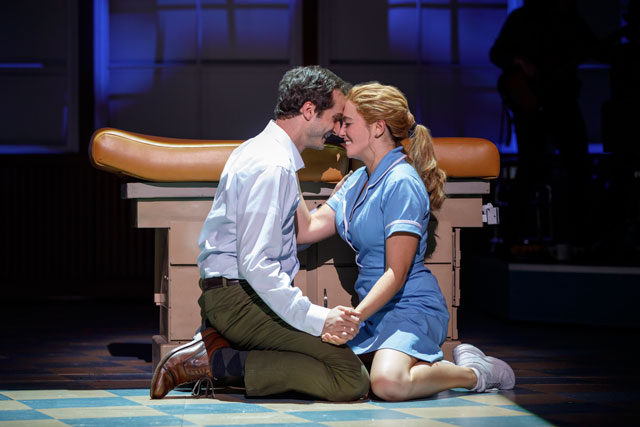 The Sara Bareilles Broadway musical, Waitress, has landed in Minneapolis on its national tour. It draws from Adrienne Shelley’s film of the same title. Desi Oakley (Les Miserable, Evita) plays protagonist, Jenna. She waits tables and makes wonderful pies. A baking competition in a nearby county opens up new avenues in her life. When a new doctor shows up in her small town, she is awakened to a fresh start. Directed by one of Broadway’s prestigious female directors, Tony Award-winner Diane Paulis (Hair, Pippin, Finding Neverland). Jessie Nelson (I am Sam) wrote the film’s screenplay and then the book for this musical version. Nick Bailey plays the dreamy doctor. The creative production team is all female.