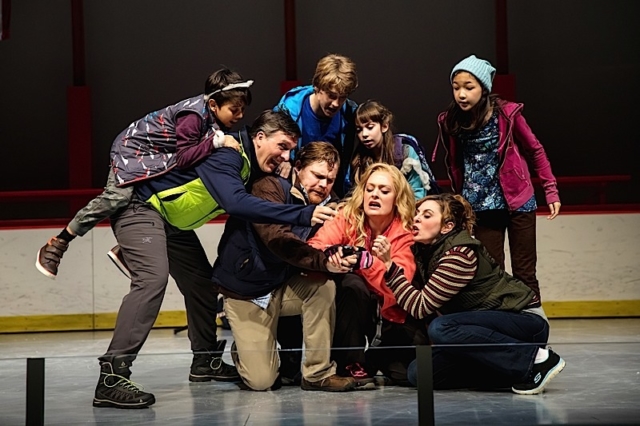 The wrongness of unfairly excluding someone solely for being different is a recurrent theme in youth-focused literature. It can come off as preachy, hitting you over the head with its righteousness, like Philip Dawkins’s stage adaptation of Dr. Seuss’s The Sneetches (which works much better as a book than for stage) or it can manifest as a layered, artful gem as exemplified by The Abominables at Children’s Theatre. This vibrantly entertaining new musical about Minnesota and Ontario high school hockey not only posits the perennial need to accept difference but brilliantly probes the character flaw of covetousness, as well as parental obsession with winning to the exclusion of sportsmanship. It was the splendid and final work of composer/lyricist Michael Friedman who passed away during the musical’s rehearsal process.

Henry Constable crackles as Mitch, a character whose hockey ambitions don’t match up with his actual ability to make the A-Team. What makes this role cuts above the didactic sort is that Munson and director/playwright Steve Cosson have rendered a vivid evocation of the nature of covetousness and envy as Mitch goes to unethical lengths to thwart a fellow student who is clearly superior to him in athletic ability on the rink. This is a musical where merit means something and irrational competitiveness is exposed for the vice it is.

Ryan Colbert endears as Harry, a new student from a marginalized group in the Himalayas. He is also taller than the rest of the boys and blessed with natural hockey talent. As jealous, shorter Mitch undermines the newcomer in the vain hope of actually replacing him, Harry is unsettled by his bullying machinations.

Exacerbating the negativity are Mitch’s disgusting sports fanatic parents who have conditioned their son to win at all costs. Autumn Ness and Reed Sigmund are enragingly effective in those roles. In addition, Joe Chvala’s robust choreography sails throughout with athletic grace. 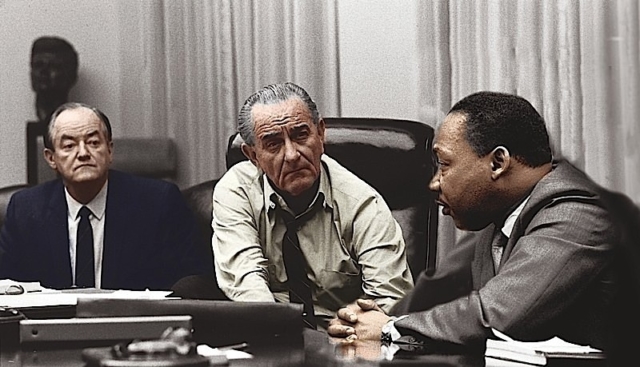 Nothing broadsides a leader-in-waiting like the assassination of the leader he serves. Such was the fate of Lyndon Baines Johnson when President John F. Kennedy was slain. LBJ swiftly inherited a nation in the throes of foreign military crises and racial unrest at home. Robert Schenkkan’s Tony Award-winning Best Play, All the Way,  is having its area premiere with Pearce Bunting as Johnson at the History Theatre.

Director Ron Peluso says, “If you are intrigued with history and politics, this is a play you won’t want to miss. America was in crisis mode and we’ll take behind-the-scenes look to see how President Johnson steers this country into calmer waters. LBJ is like King Lear battling the storm of a chaotic America.” 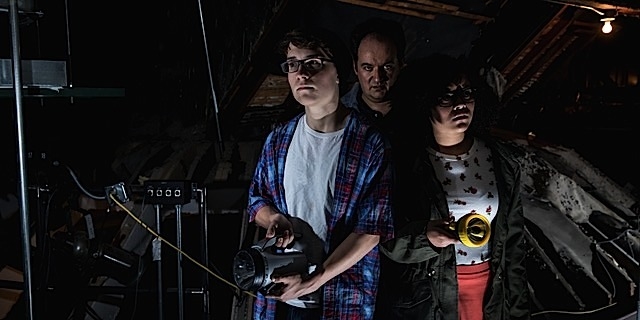 SteppingStone Theatre launches its 30th season, not to mention the Halloween season, with a spooky comedy based on an enormously popular book series for young people. Actor Todd O’Dowd shares, “As someone who grew up reading the Goosebumps series, I was tickled pink to see that one of the books had been adapted into a musical. What I wasn’t expecting was that John Maclay and Danny Abosch’s adaptation would be so smart and so entertaining; managing to make a really solid musical that manages to capture the pathos, horror, and black comedy of R.L. Stine’s novels while slipping in some sly nods and winks to other versions of this famous story. Best of all, besides being a blast to perform in, I get to share the stage with some of the most astonishingly talented young actors I’ve ever had the privilege of working with in my career. You’ll laugh, you’ll cry, you’ll get Goosebumps—pun intended.”

London’s Royal Court has long served as one of the world’s leading theaters for new plays. It has given us some the best works of some of the greatest. It’s where John Osborne’s Look Back in Anger and Caryl Churchill’s Top Girls first opened. Frank Theatre, a producer of some of Churchill’s Royal Court works, once again offers an area premiere of a Royal Court hit, this one by Alice Birch (b.1986).

Director Wendy Knox enthuses, “I’m just thrilled that we got the rights for Revolt. She Said. Revolt Again. It’s a great play for Frank to wrestle with: it’s naughty, it’s cheeky, it’s provocative, and it’s fun! Feminist and fun! And, at this time—or at any time—it’s is just a relief to tackle a piece that is unabashedly feminist, calling us all out, and urging us, as the title says, to revolt against the many ways in which women are confined by forces that are often seemingly invisible to us. We’re having a ball!” 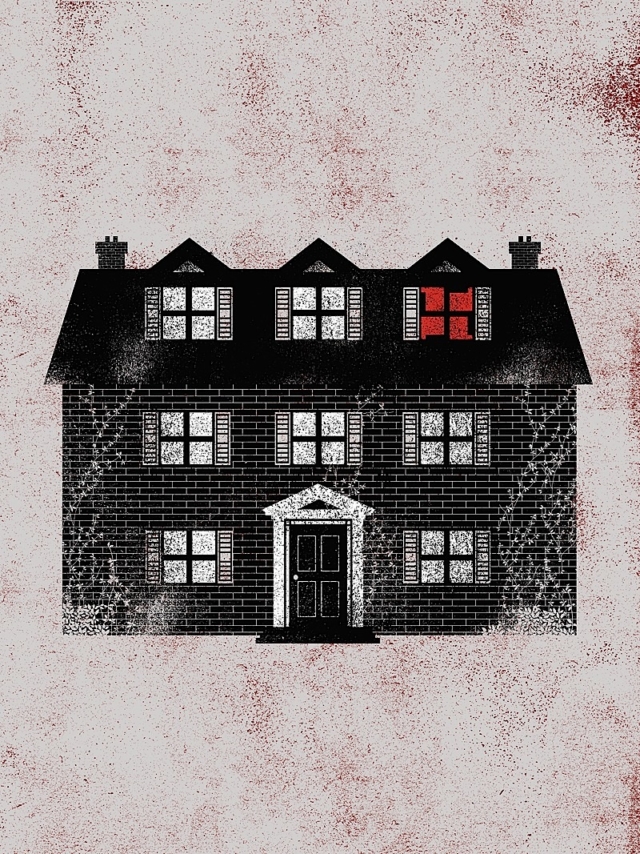 Courtesy of the Guthrie Theater

Master playwright Lillian Hellman’s Watch on the Rhine first opened nine months before the US entered World War II. While the Nazis had been increasing their influence during the 1930s, she, being Jewish, had been closely following ramifications of their terrifying rise to power. As Guthrie Theater dramaturg, Jo Holcomb, points out, “She had been to Spain during the final months of the Spanish Civil War and had traveled enough in Europe toward the end of the 1930s to see the ravages of what the Third Reich had wrought and to have a clear picture of what was to come.” 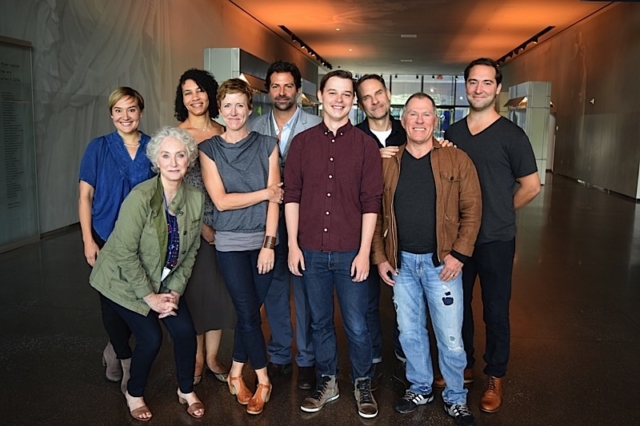 In Hellman’s Pentimento memoir, America’s most historically prominent female playwright wrote reflecting on Watch on the Rhine: “Many Europeans had moved here with the triumph of HItler in the 1930s. Few of us asked questions about their past or present convictions because we took for granted that they had left either in fear of persecution or to make a brave protest. They were our kind of folks. It took me a long time to find out that many of them had strange histories and that their hosts, or the people who vouched for them, knew all about their past. Two of the perhaps eight or nine that I met turned out to have unexpected reasons for emigration: both had been Nazi sympathizers; in one case the grandfather wanted to preserve his remarkable art collection from the threatening sounds the ‘new barbarians’ made about modern painting; in the other, bribe money had not been able to suppress a nineteenth century conversion from Judaism to Luther. Luther. I was vaguely related to that family, and when I asked about the truth of the rumor, the son of the family never spoke to me again. But a few weeks later I had a note from his mother saying that she was surprised to find that certain Jews in America claimed a blood connection to her family, when, in fact, they hand ‘no legal or moral right’ to do so.”