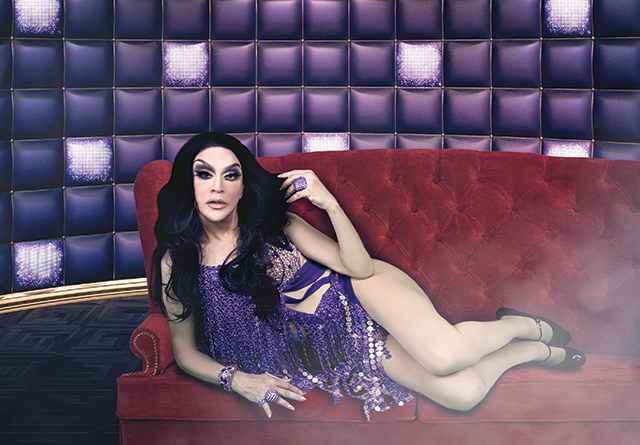 Dramatist Jonas Hassen Khemiri is revered in Sweden and his play was recently read publicly at the American Swedish Institute in Minneapolis. It addresses just how confusing, beguiling, and downright disordering the manic mixed messages can be out there about how to make money, survive, prosper, and profit.

Pillsbury House production director Noel Raymond said, “I was attracted to ? [almost equal to] for many reasons: it is completely unlike anything I have read or seen before; it is hilarious but with a powerful emotional undercurrent; it is wildly theatrical—which is super fun to work on—and it is superbly written. And the cast we were lucky enough to get is amazing. The story artfully shows us, through characters not too far from ourselves, the human consequences of economic systems built on capitalism.” 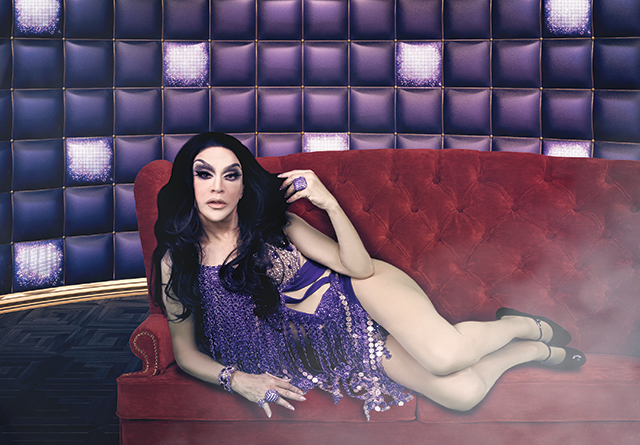 Mark Hooker made his mark (no pun intended) as one of the Twin Cities’ truly great drag entertainers and for establishing the outstanding Brazen Theater Company which was renown for its first-rate camp and drag aesthetic. Hooker is returning to the Minnesota stage at Bryant Lake Bowl for two benefit performances for two important and worthy local GLBT organizations: Gadfly Theater, the area’s finest theater with a primarily GLBT focus and The Aliveness Project, which has been absolutely indispensable for its assistance for those with HIV/AIDS.

Hooker himself is an HIV/AIDS survivor since 1985. He is also known for his work on soap operas, as well as being an accomplished stage director. Hooker soon turns 60 and is thrilled to be “lip synching for The Aliveness Project and Gadfly Theatre.” And he points out that “walking in high heels with peripheral neuropathy is not for sissies!”

The Minneapolis Institute of Art is presenting and inspired exhibit that relates the back stories behind various 18th-century European paintings. There is a tendency for most of us to rightly “ooh” and “ahh” when we see a gorgeous painting from the past. And there’s nothing wrong with that! However, viewing such a painting and knowing the story behind it makes for a richer and more textured experience of the viewing. Typically, we don’t see such paintings as actually being visceral depictions of contemporary events of their time.

To make the point: if we see a photo of Martin Luther King, Jr. in front of the multitudes in Washington, or the Twin Towers on 9/11, or Pope Francis celebrating mass, we know immediately what the situation was for which the photo was so important. In the time before photography, paintings served a similar function.

Over the past few years we have become increasingly conscious of how much media images can deceive. At Mia, Eyewitness Views: Making History in Eighteenth-Century Europe has a shrewdly uncanny way of connecting this to the broad scope of history. Power structures manipulated images in past centuries as well. You’ll see how painter Antonio Joli depicts a revolt of the poor during a famine in stark contrast to the intimidating gated complex overlooking the conflict. Hubert Robert’s The Fire at the Opera House of the Palais-Royal was an event that would have been well-known to many at the time.

Throughout the exhibit within the painting selections there is a vividly delineated vision of class differences in relation to the authoritative spectacle of staged reenactments: in Venice we witness third-hand, so to speak, embassies there by the Vatican, not to mention the celebration of elite marriage in France. Moreover, the power of nature itself amazes with lava-driven imagery of the eruption of Mount Vesuvius, in contrast to various human-bound civic and religious rituals. You’ll see how manipulating and selecting imagery influences and reinforces how we are meant to feel by the powers with the puppet strings. This may be a modest exhibit but it has numinous insights as you take it in. Not to be missed!

Mixed Blood Theatre can be relied on for presenting recent plays that tap into current socio-political issues. With How to Use a Knife by Will Snider, a restaurant kitchen is where interpersonal conflicts play out, reflecting cultural differences. Guatemalan line cooks and an East African dishwasher are among the various characters in this comedic examination of machismo. Artistic Director Jack Reuler says the play “is definitive Mixed Blood: hilarious until it’s not, propelled by catalytic cultural collisions, simultaneously political and theatrical, timely in America and in our own Cedar-Riverside neighborhood, multi-lingual, and 90 intermission-less minutes.”

William Shakespeare’s tragedy about two young star-crossed lovers who loved despite the consent of their feuding families in “Fair Verona” looms as what is most likely the most popular play ever. It was written and performed at the very end of the 16th century and expresses profound concern over the ferocity and dire consequences of social divisions. Though there never has been a time since its inception that Romeo and Juliet hasn’t been widely produced, it does seem especially timely for today’s chaotically angry atmosphere. The Guthrie Theater now presents a revival directed by Joseph Haj as part of its ongoing commitment to major classic plays.

Although the characters, Romeo and Juliet, are heterosexual lovers, their tragedy has been perennially beloved by same-sex lovers because of the forbidden aspect of their relationship—something gays and lesbians can surely relate to. The drama is also a quintessential indictment against the practice of arranged marriage, something common to Western culture right up until the late 19th century and still common in some places. The very idea that you should marry for love, rather than position or security, is taken for granted as a given now. But love and marriage are comparatively recent developments. Romeo and Juliet deserves incalculable credit for using the power of the word and the power of the stage to forward that. 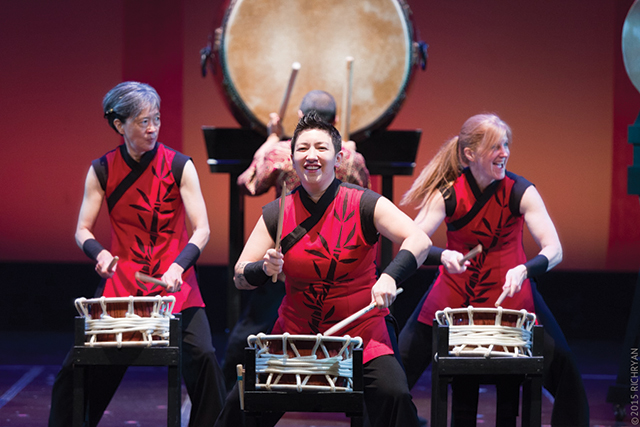 From warfare to ritual to general ambience, the percussive drumming tradition of Japan has marked its signature as a major Asian performing art form. Just think, here and now in 2017 we can experience an art form that began to take shape some 1500 years ago. Note that Korean and Chinese influences were a part of the alchemy. This tradition has been given an exhilarating ongoing platform by Taiko Arts Midwest. On various Tuesday evenings until early December, Taiko concerts can be enjoyed by the public free of charge.

Theater in the Round Players is launching their 66th season. No Minneapolis theater has been around as long as they have. The longevity can be largely attributed to continually staging plays that are classic or those of playwrights with a proven track record, with the Twin Cities exceptional acting pool. For instance, their current production is written by a man who is sometimes considered to be the UK’s Neil Simon, as well as one of the most skilled comedy-farce writers to ever deal with the messy intertwining of love and sex.

Director Dann Peterson shares, “Alan Ayckbourn specifically intended Taking Steps to be performed in the round. In fact, he defies its success on a proscenium stage. He also considers this play to be his only true full-length farce. Most farces rely on doors with surprises lurking behind each door. Ayckbourn has substituted floors for doors—the attic, the master bedroom, the living room, and the linking staircases of a house overlaid on each other in a single space. We are able to see action happening on various ‘floors’ at the same time. This works only if the audience is able to see the entire floor of the performance space. If you can’t see the floor, you’re losing the playwright’s intention and the visual humor of the characters on different floors standing right next to each other.”

Peterson continues, “On a proscenium stage the background is the key visual element; in theatre-in-the-round the key visual element is the floor. Ayckbourn develops interesting—often fascinating—characters and places them in complicated, often seemingly improbable, situations which leads to great comedy and intriguing plot lines. The central issues of Taking Steps are embodied more in character than in situations. This is a play in which the people are forever ‘taking steps’ to change their lives, yet most wind up in much the same place as they started. These people are perpetually in each other’s way without ever being able to communicate; even when they are on the same floor they have difficulty making real contact.”