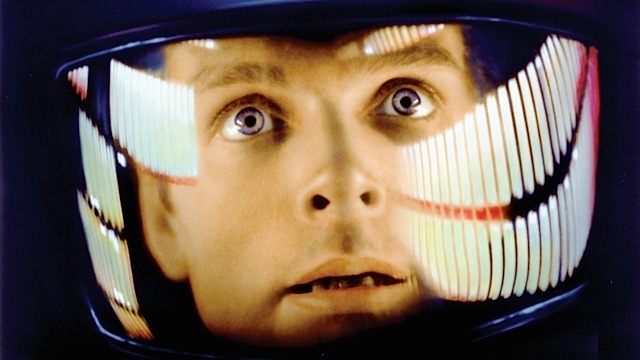 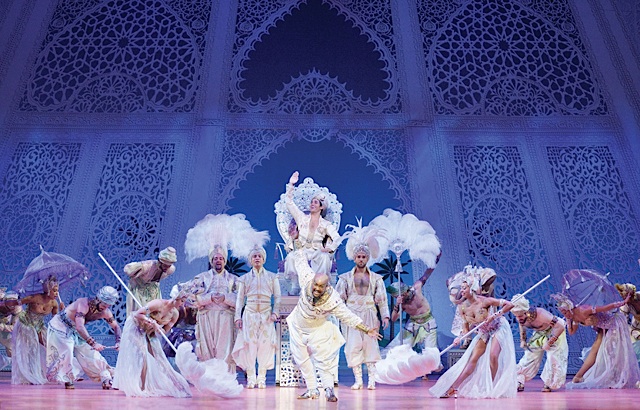 Broadway’s version of the 1992 Disney film is rolling in a hot North American tour. At the Orpheum ride the magic carpet to the city of Agrabah where the genie tells us “even the poor people are fabulous.” Inspired by the Middle Eastern folk tales known as The Arabian Nights, the musical stage version of Aladdin centers on a young, buff street thug who steals from the rich and gives to the poor. Fortune shines when the opportunity to marry Jasmine, the independent-minded daughter of a wealthy sultan arises. Alan Menken’s music and lyrics by Howard Ashman and Tim Rice include the tune from the film that won the Best Song Oscar: “A Whole New World.” 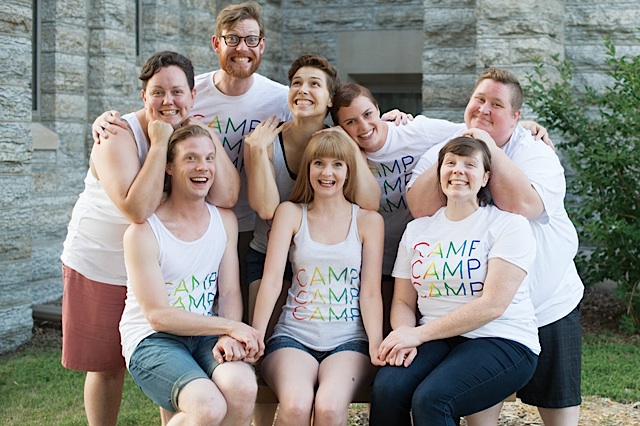 Ex-Gays: Not a Str8 Remount. Photo by Carl-Atiya Swanson

Reparative Therapy, a damaging psychological process, aims to turn off inherent homosexual feelings and turn on (impose) non-inherent heterosexual feelings. The queer-led Savage Umbrella troupe is reviving their 2011 production of Ex-Gays which satirizes that approach. However, some significant changes have been made.

Director Laura Leffler says, “The biggest change is the addition of three new characters. This has given the show both a deepening of its darker side and an introduction to a more balanced look at Christianity. One of the criticisms of the show we heard last time is that the pastor’s wife didn’t get much of her own story and that the show feels like a condemnation of Christianity, which is definitely not our intention. So with these three new characters we are getting to explore new pairings of characters, more of the inner life of the pastor’s wife, and some touching moments around actual values of Christianity: love, empathy, compassion, forgiveness.”

She adds, “Another key addition to the show is that one of the three new characters is a trans person. We initially wanted to include this character in 2011, but we didn’t have the right people involved, and we didn’t want to do it poorly. So one of my main goals this time around as we re-envisioned things was to create a space for that trans character in the show, and to create a space for a trans actor to have some real say in the way this character is created and in the overall show. And, actually, the addition of this character has had a profound and wonderful impact on the trajectory of the main arc of the story.”

Dream “The Impossible Dream” as Theater Latte Da begins its 20th season with one of musical theater’s most moving scores. The 1964 classic inspired by Miguel de Cervantes’s Don Quixote champions the need for idealism in a fallen world and bowls us over with its cry against sex shaming and degradation of women. Martín Solá plays the title role.

Music Director Denise Prosek points out that the music is “instigated by Cervantes’s—aka Don Quixote’s—imagination, and helps propel the action, the love, and the power of dreaming. La Mancha is a play within a play—well, a musical within a play—and it’s full of rhythm and vitality that pulsates through the whole show. It’s mainly based on flamenco rhythms. If you think ‘America’ from West Side Story and how it shifts time signatures, that is a good idea of the rhythmic structure of this show. These rhythms pulsate with life and, while doing so, insist that every song, every underscore of Cervantes’s story be heard.”

In our time, when Facebook reveals deeply personal thoughts and human connections by the scores of millions (and who knows who all is reading them) and Google glories as the arbiter of what’s acceptable for you and I or not, Sam Graber’s new play, mONSTER, gives context to this by looking at the beginning of the World Wide Web and some of its more negative developments. This Swandive Theatre offering at Southern Theater is set in a single room with manifestations of the web surrounding it.

Director Meg DiSciorio wants the audience “to be engulfed by the world we are creating and at the same time share the feelings of claustrophobia and oppression that a college dorm room can elicit. It’s going to be a wild ride, merging those two worlds on stage.” 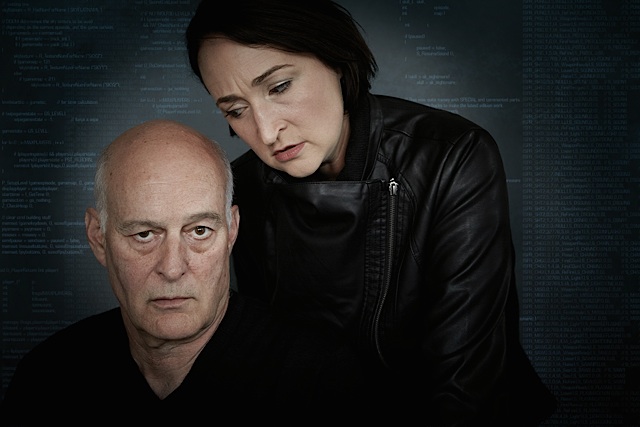 The Nether. Photo by William Clark

Jennifer Haley’s acclaimed drama, The Nether, blends sci-fi, crime, and our unspoken desires into a cautionary tale for our time. At the Jungle, Los Angeles director Casey Stangl returns to the Minneapolis roots of her early career. Stephen Yoakam and Mo Perry star with a supporting cast that includes the masterful Craig Johnson in his Jungle debut as Cedric Doyle. He was one of Stangl’s peers at the U of M a generation ago.

Johnson calls The Nether “a gripping stage thriller with exciting reveals and plot twists, but at the same time it raises provocative questions about virtual reality and online lives—plus sexuality, gender identity, and the nature of love. And I think it’s a perfect show for the Jungle because it showcases the intimacy of the space and their virtuoso visual splendor. Doyle is one of the users of an online realm called The Hideaway—I’ll just say that his journey is harrowing enough that after rehearsal I usually want to curl up in a ball and take a nap.” 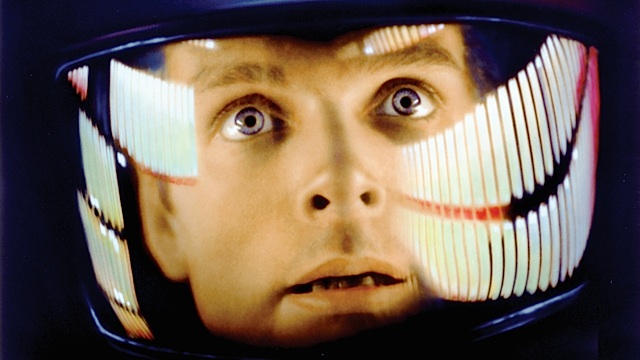 Stanley Kubrick (1928-1999) looms as one the most hauntingly magnetic of film auteurs. Each of his 16 motion pictures has its creator’s distinct signature, yet they are singular dimensions unto themselves. His was a view so broad, vast, and varied that when you sit and just think about it, you’re apt to be bowled over that one mind birthed such a body of work.

The Heights Theater’s widescreen is a dream come true for seeing five of Kubrick’s movies in their intended movie house composition. DVD just doesn’t hack it, even on the biggest screens in the darkest residential rooms (unless you live in a palace). The Stanley Kubrick Experience series starts with 1964’s Dr. Strangelove or: How I Learned to Stop Worrying and Love the Bomb (Sept. 28, 7:30 p.m.). This Best Picture Oscar nominee and New York Film Critics Best Picture winner spoofs potential perils of overly hawkish views at the Pentagon. The Cold War shifts into overdrive as Kubrick taps into anxieties unleashed by the 1962 Cuban Missile Crisis.

1980’s The Shining (Oct. 5, 7:30 p.m.) showcases one of Kubrick’s primary cinematographers, John Alcott, in utterly breathtaking form. The big screen does it justice! Is The Shining a B-Movie with an over-the-top leading performance by Jack Nicholson at his most self-indulgent or does it enter new territory in the region of the macabre? People seem to be hot or cold on this one. But Alcott is definitely hot by any standard.

However, from the series’s midpoint on, the Heights selections are much richer, so if you’ve never seen them, then for goodness sakes, do so! That midpoint is marked by the sumptuously detached 1975 epic, Barry Lyndon (Oct. 12, 7:30 p.m.), possibly Kubrick’s greatest film. Moreover, by most accounts it has come to be regarded as his most visually splendid. The inspired casting of Ryan O’Neal in the title role of an Irishman whose fortunes rise and fall in the most classical sense, makes for a magisterial examination of male identity in 18th century. Not to mention the candlelit beauty in Alcott’s Oscar-winning camera work. To this day, many feel Barry Lyndon, despite winning four Oscars, was robbed of the Best Picture statuette by One Flew Over the Cuckoo’s Nest.

Full Metal Jacket (Oct. 19, 7:30 p.m.) from 1987 is arguably the best film there is on the U.S. in Vietnam. The searing imprint of war on young male minds is indelibly rendered. And fasten your seatbelts for 2001: A Space Odyssey in 70mm! The 1968 groundbreaker—or maybe skybreaker is a better term—set the gold standard for sci-fi thereafter and its skepticism toward technology may even be more relevant today than it was 50 years ago.