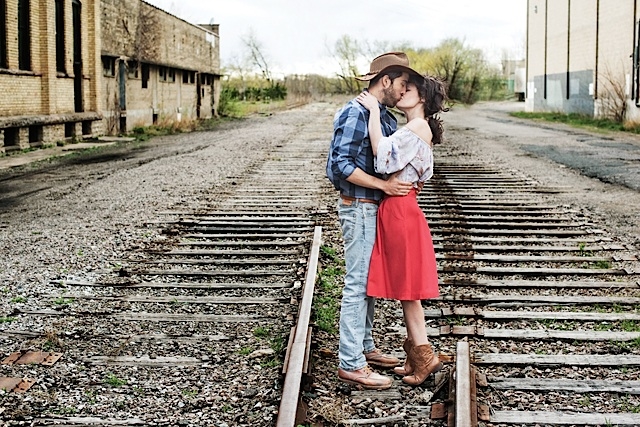 The 1940 evacuation of British and French troops from Dunkirk on the French coast has been shaped into a stunning cinematic marvel in Dunkirk. Filmmaker Christopher Nolan embraces the overwhelming nature of a military catastrophe that rates up there with such masterpieces as Elem Klimov’s Come and See, John Frankenheimer’s Andersonville, and Terrence Malick’s The Thin Red Line. The youth of the soldiers, shot in gripping closeup throughout by cinematographer, Hoyte van Hoytema, is relentlessly heartbreaking as they endure horrific obstacles crossing the English Channel back to their home island nation. We bear witness to the nightmare of being trapped in sinking naval vessels, the unnerving unpredictability of air warfare, and underwater shots of soldiers in the process of drowning or trying to come up for air only to be met with actually blazing fire caused by oil spilled into the water.

A major thrust in Dunkirk is the flotilla of smaller privately owned sailing vessels that actually went out en masse to save who they could of the imperiled men. This aspect is made intensely human as a middle class civilian, played in yet another Oscar-caliber performance by Guthrie veteran Mark Rylance, his teenaged son, and the son’s school chum, make their way out of pure patriotism to rescue what troops they can in their boat with a small cabin below. The horror that plays out on board is juxtaposed with the epic horrors the soldiers face on the Channel. Without spoiling it, these well-meaning civilians encounter a volatile situation that ratchets up Dunkirk‘s breathtaking dramatic power. 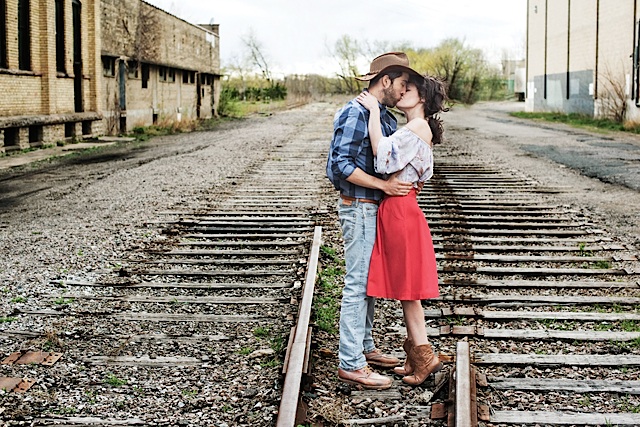 Cycles of dependent love, or maybe “treacherous attraction” is a better way to put it, are indelibly rendered in one of late Sam Shepard’s finest plays, Fool for Love. The turbulence of a man and a woman who can’t quite quit each other plays out in a Mojave Desert motel room where the subconscious mind seems to come to raw conscious life. This 1983 contemporary classic is being revived by Dark & Stormy Productions.

Director Mel Day thinks of the old saying “Can’t live with ’em, can’t live without ’em” as reflective of the dynamic inherent in Fool For Love. She shares, “That’s the crux of the relationship between Eddie (James Rodriguez) and May (Sara Marsh). Their connection is just as magnetic as it is toxic. This play shows one round of a never-ending cycle they can’t seem to break. Eddie finds May, they fight, they connect, something breaks their connection, Eddie leaves, until they are apart for so long that he can’t stand it and then the cycle starts again.”

Day amplifies that “the most damaging relationships are often some of the most passionate. Love, in this way, becomes the sweetest pain. It is an insatiable torture. This is the love between Eddie and May. They are completely aware of how horrible they are for each other, yet their ache cuts so deeply and their bond so forceful, it is impossible for them to break free from their tragic union.”

Another character figures into this maelstrom providing a mystical dimension, you might say. Actor Patrick Coyle shares, “The story, I believe, takes place in my character’s head. He sits in a form of purgatory, forced to witness the brutal consequences of a bad decision he made decades ago, over and over, unable to move on until he acknowledges his own complicity which he seems unable or unwilling to do, so he medicates with alcohol and fantasizes about a Hollywood starlet and stays stuck in his rocking chair waiting to die while his tortured progeny heroically battle to break the cycle of family pain.”

Coyle adds, “On a lighter not, I get to witness a volatile, powerful, funny, sexy drama unfold every night by terrific young actors led by a brilliant young director. I love my job.” Coyle was named Best Actor of 2002 in Lavender for The Fourposter at the Jungle Theater. 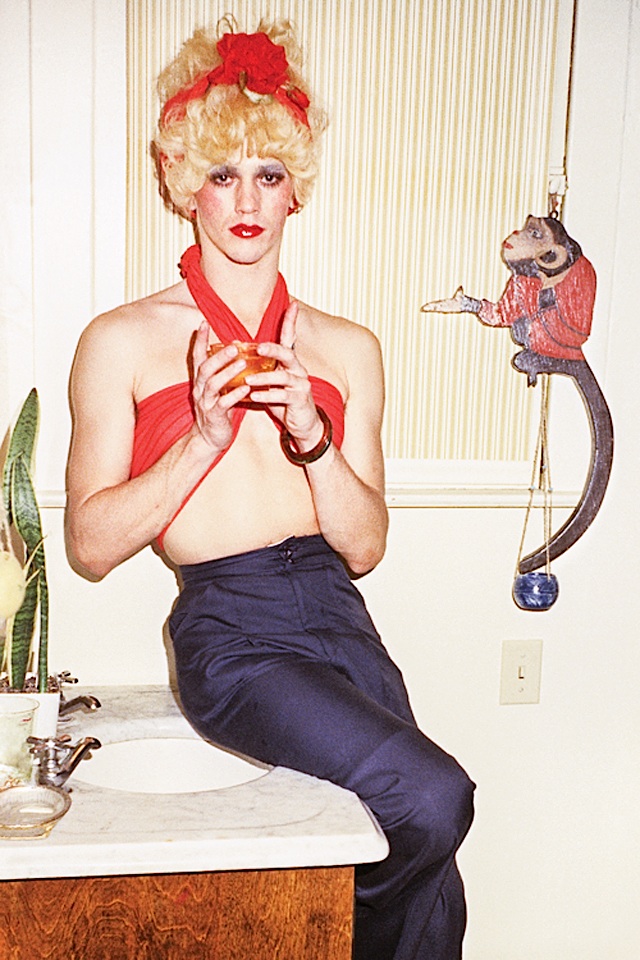 In Search of the Glass Slipper, San Francisco, 1974. Photo by Perci Chester

The Traffic Zone Gallery is presenting an exhibit of Perci Chester photographs that reveal six months of queer life in the time between the Stonewall Riots and the AIDS epidemic in the City by the Bay. These images were taken soon after her graduation from art school and capture the essence of the time and place. This artist is also known for sculpture, painting, and printmaking. Chester is also celebrated for large scale anthropomorphic installations, use of color as metaphor, and interconnections between emotion, spirit, and color.

Regarding the Traffic Zone exhibit, Chester elaborates, “This series began with an invitation to a house party in the mid ’70s in San Francisco—a city that embraced a broad spectrum of creative energy. The resulting images are ennobling; they document a community in which personal expression, friendship, and theater thrived, protected and partially hidden from view. I appreciate the trust that allowed me to record those moments.” 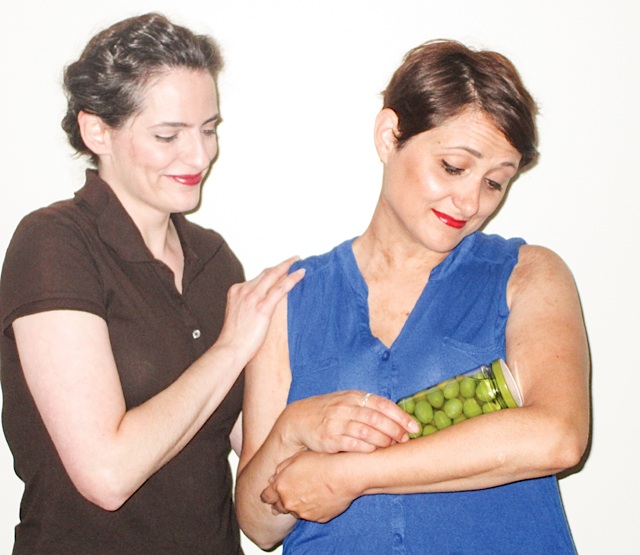 Italian Nobel Laureate Dario Fo (1926-2016) was known for his concerns about increasing economic divisions. This heterosexual playwright, who took a ground zero look at the underclass, is sometimes contrasted with gay playwrights, Noel Coward and Oscar Wilde, who satirized the life of the upper class, or as some will say “overclass.” Candid Theater has an accomplished reputation as a company that delivers politically charged work that has tended toward drama and realistic comedy, but with Fo, they enter new territory: the genre of farce.

Director Jusin Kirkeberg says, “In We Wont Pay! We Wont Pay!, Dario Fo uses absurdist comedy to heighten to an extreme the all-too-real situation that so many people will find themselves in: ‘Do I buy bread or do pay rent?’ Fo takes this real-life decision and turns it on its side when two women struggle to hide their bounty of ill-gotten produce from not only their husbands but the military state. Fo uses comedy to lampoon government with impunity, highlighting the fact that often even the people within authority do not support the decisions being enforced, but continue to enforce them.”

As we pivot into doing the work of restoring transgender rights in the military, it is instructive to go back a century and reflect on what ironically was called The War to End All Wars. World War I is the subject of a Minnesota History Center exhibit, WWI America. The United States joined the Allies to defeat the Central Powers, of which Germany was the ringleader, in 1917, despite a public that only a year previously opposed involvement. However, the sinking of the Lusitania and the infamous Zimmerman in which Germany approached Mexico to be their ally were two straws that helped to break the proverbial camel’s back.

After a three-year neutrality period, President Woodrow Wilson finally gave in and the U.S. entered the struggle in 1917. The exhibit looks at the war itself, as well as society at the time. It was a period when women’s suffrage reached its critical peak, Bolshevik (Communist) and anarchist movements became very strong, and European ethnic and racial divisions factored profoundly into the whole equation.