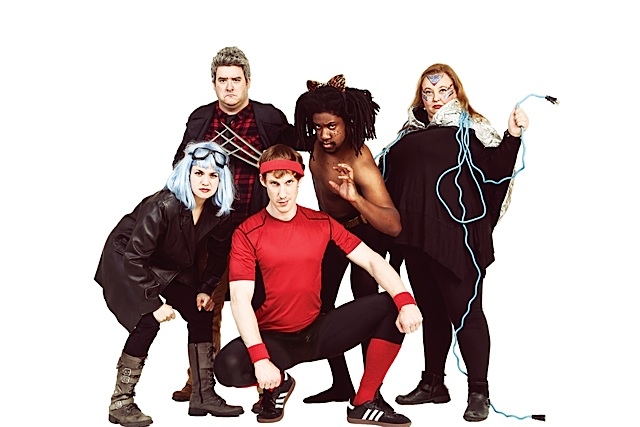 Guardians of the Fallacy. Photo by Dani Werner 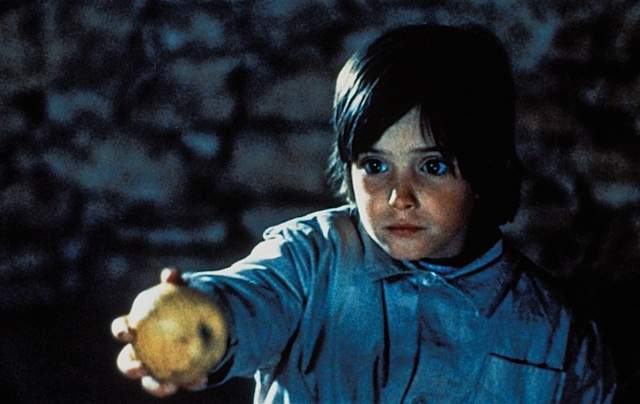 The Cinema in Film, The Spirit of The Beehive. Photo by Luis Cuadrado

Movies make a profound imprint on us that most of us tend to underestimate. Trylon Cinema reflects on this as their summer season’s The Cinema in Film series continues. In the 1973 Spanish classic, The Spirit of the Beehive, a little girl experiences the shock of seeing Frankenstein for the first time. In Woody Allen’s 1985 comedy, The Purple Rose of Cairo, which won numerous Best Picture awards and nominations, Mia Farrow gives a devastating performance as a working-class woman whose view of love and romance has been totally shaped by pre-1940s cinema. Beehive plays Aug. 20-22. Purple plays Aug. 25-27.

Those thirsty to celebrate a mature gay master filmmaker in our time when youth rules as aggressively as ever will find sustenance in The Long Day Closes. Terence Davies (b. 1945) takes us to Liverpool in the ’50s where 11-year-old Bud lives in his imagination under the wing of his family, church, and school. This film, among many things, is a reminder of postwar Great Britain’s need for healing. The magic of movie dialogue familiar to the time helps the struggling young protagonist look to the bright side and find hope for the future.

In recent years Davies gave us the devastating film version of The Deep Blue Sea, playwright Terence Rattigan’s wrenching codified look at his gay experiences through straight proxies. This year he stunned again with A Quiet Passion in which a superlative Cynthia Nixon portrays a brutally and vividly honest portrayal of poet giant, Emily Dickinson. The Long Day Closes, Davies’s 1992 classic, plays the Trylon Aug. 27-29. 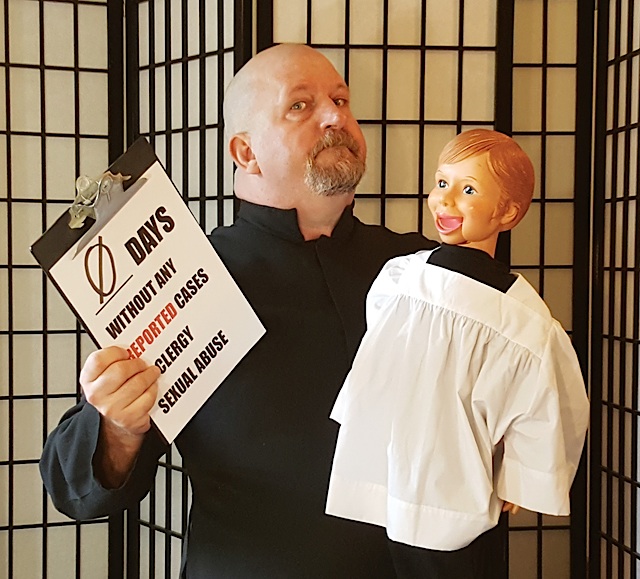 Faith-From Anger Into Trust and Hope. Photo by Oliver Lind

David Lind bravely steps forward to tell his story on stage for the Minnesota Fringe Festival. He states, “I was sexually abused by the priest at my church when I was 14. I immediately repressed any memory of it. In the spring of 2007, I was 43 and a partial memory of the abuse surfaced; just enough to know that something had happened. I started therapy shortly after the memory surfaced and, as part of my healing, I wrote. Being a theatre artist, a lot of what I wrote showed up as theatrical moments. I would see little vignettes in my mind and then put them down on paper.  I eventually started fleshing them out into actual scripted scenes.”

Lind continues, “Earlier this year, I decided to enter the Fringe Festival’s lottery and try for a performing slot. At that point, I wasn’t sure what I’d even produce—although I had a few different ideas. I was discussing my thoughts about what show I should produce with my son, who is currently the same age I was when I was abused, and he asked me how long it’d been since I performed or directed a Fringe Festival show. I had to look it up because it had been awhile.”

However, Lind discovered the coincidences weren’t over; “I found out my show opens on August 4, the deadline for both sides of the Archdiocese bankruptcy case to file their responses to each other’s objections. And a few days after my show closes, Governor Dayton will be declaring Minnesota Break The Silence Day, August 16.”

Lind’s piece is certainly aimed at coming to grips with abuse with the hope that others can benefit from it. He points out that “the show looks at the healing journey of a clergy sexual abuse survivor. It really is about the journey from anger into trust and hope. There will be scenes that explore the anger, some that explore the work required to heal, others explore the magnitude of this issue as well as the issue of sexual assault—in addition to being abused by the priest at my church, I experienced statutory rape at sixteen and sexual assault as an adult.”

Here are the goals Lind has set out for Faith – From Anger into Trust and Hope: 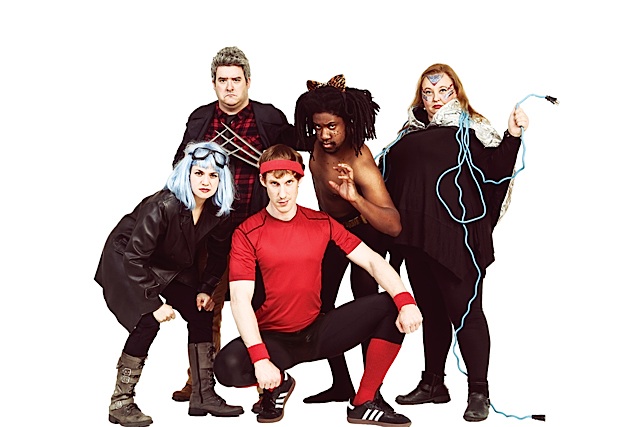 Guardians of the Fallacy. Photo by Dani Werner

Brave New Workshop continues to live up to its reputation as the snappiest and most skilled comedy theater in the region with this sharply executed new satirical revue on current political currents. Of course, at the center of it all is our controversial new President and the perils he seems to be continually warding off. BNW prides itself for offending people of different political orientations but in this case, director Caleb McEwen and his collaborating comic actors, have clearly weighed in on “the deplorables,” those particular white folks Hillary took to task during last year’s campaign.

Much of the show is connected by a tour enjoyed by a couple of Trump-loving hicks (Taj Ruler, Tom Reed) who seem on the verge of drooling due to inbreeding, and a scornfully critical, sharp-minded African American (Denzel Belin) who clearly isn’t enjoying himself. As they go through the Trump Presidential Library, one of the tour guides (Ryan Nelson) continuously refers to it as the “libary” (no “r” after the “b”).

That said, Hillary returns in a haughty personification by the marvelous Lauren Anderson. To be sure, she isn’t portrayed exactly as likable and one vignette takes some unflattering digs at die-hard feminists. Moreover, this revue takes on women on both sides: for instance, Belin’s mocking crossgender take-down on Kellyanne Conway and nasty jabs throughout at Education Secretary Betsy DeVos.

Nonetheless, Guardians of the Fallacy leans unmistakably in a sustained disdainful way against the President. It also doesn’t really weight into how both parties in Congress have sustained poll numbers that are startlingly low since the Inauguration and their actions and inaction bolster citizens’ justifications for loathing them.

One of Guardian’s shiniest segments, however, is in the sunny, phony way some businesses stress that “All Are Welcome Here.” When an interracial gay couple falls in the crosshairs of this brand of political correctness, the effect is quite funny, though it could have been explored more critically. After all, GLBT people have been passionate proponents of that slogan and don’t we need to take some responsibility for its potential misuse?

It was very interesting to experience the revue on a heavily sold Saturday night. It was clear that much of the audience was right on board—their laughter and body language showed it. Many bordered on uncontrolled laughter, seriously! On the other hand, you could sense the resistance of several others. Indeed, this is political comedy that borders on the explosive. 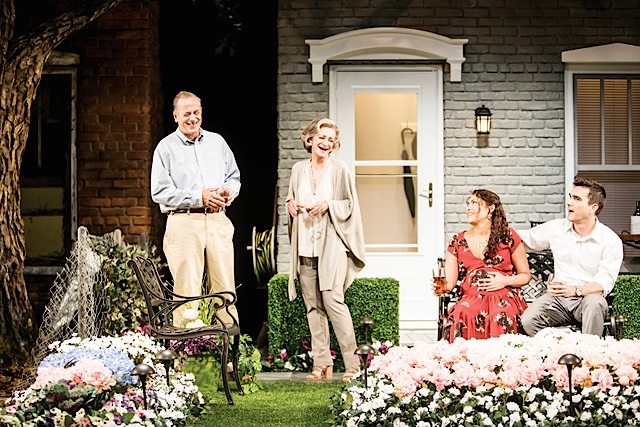 Guthrie Theater Artistic Director Joseph Haj continues to live up to his reputation as someone who widens the net of inclusivity. Playwright Karen Zacarias’s celebrated comedy, Native Gardens, portrays a clash of gardeners and of cultures. One couple, played by Jacqueline Correa and Dan Domingues, face off against another couple, played by Sally Wingert and Steve Hendrickson. Blake Robison directed the first production last year at Cincinnati Playhouse in the Park.

Robison shares, “Karen is one of the few playwrights who knows how to write a really great comedy in the spirit of the good old-fashioned comedies. There’s a heightened nature of the interactions between the characters, but there’s also a great deal of truth in it. We have the privilege of finding where those meet and to tackle issues we’re all grappling with today in a big-hearted, relatable way.”