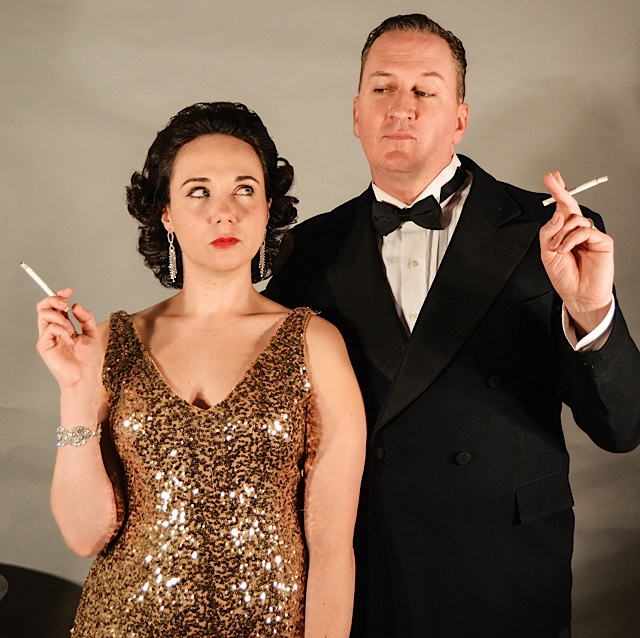 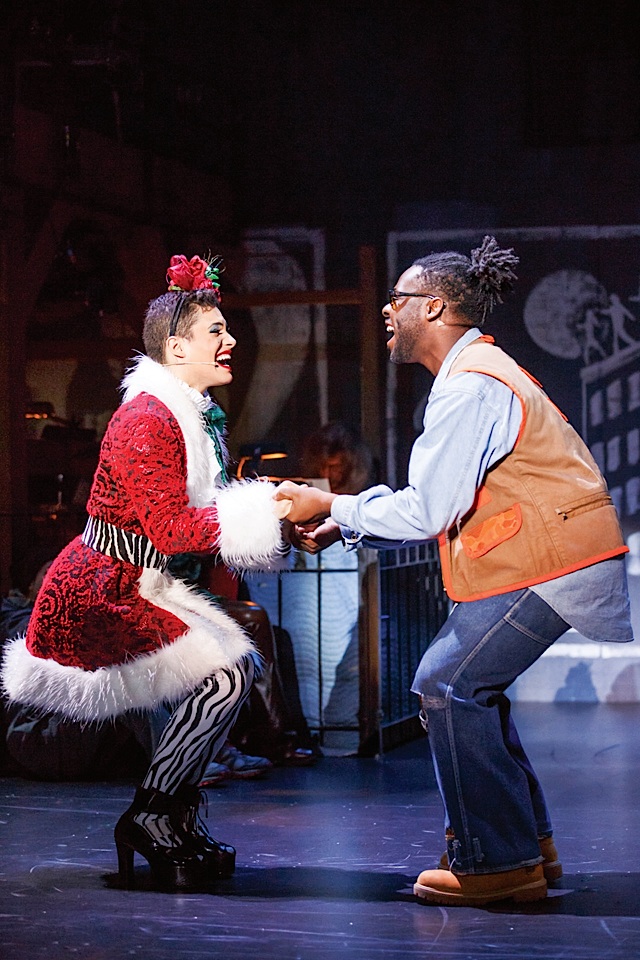 Hard to believe, but it has been 20 years since Rent blew the lid off musical theater. In 1996, Jonathan Larson’s rock musical integrated racial diversity, HIV/AIDS, various sexual orientations, addiction, and economic stratification into a show unlike any Broadway had ever seen. Larson passed away abruptly from an aortic dissection on the morning of the day Rent opened for its first Off-Broadway preview performance. Three months later it would open on Broadway and run for a smashing 12 years. Larson would go on to be awarded posthumously the Pulitzer Prize for Drama and Tony Awards for Best Musical, Best Book of a Musical, and Best Original Score. Rent was inspired to great degree by the opera La Bohème by Giacomo Puccini. Though the movie is wonderful, Rent is especially powerful as presented live on stage.

Nijala Sun wrote the solo play No Child, which Sonja Parks wowed audiences with at Pillsbury House in recent years. Now, Sun herself is here from the east coast and is the solo actor on stage with her own highly acclaimed solo play, Pike St., at Pillsbury House. As a hurricane threatens New York, mother Evelyn must find protection for her disabled teenage daughter. Evelyn’s brother is serving in Afghanistan and sends her money to help her out. However, throughout the piece, Sun portrays numerous characters reflecting on the emergency at hand, as well as considerations about race, immigration, and the inordinate power of big power companies.

Private Lives
Through June 25
Theatre in the Round Players, 245 Cedar Ave., Minneapolis
612-333-3010
www.theatreintheround.org

Noel Coward (1899–1973) is one of the emblematic gay playwrights and entertainment figures of the 20th century. His highbrow wit epitomizes high class British sophistication and shines at its most dazzling in Private Lives (1930). Coward’s elegance and high-class flourish gave us some of the most clever wordplay in the English language, clearly standing on the shoulders of another legendary gay sophisticate, Oscar Wilde.

At Theatre in the Round director Dann Peterson points out that “there has been some speculation that certain aspects of Private Lives symbolize homosexuality, and some people say the piece is rife with gay innuendo; although there is no explicit reference to homosexuality in the script. Coward has his characters use a great deal of exaggeration in the play, illustrating the ‘camp’ sensibility often associated with homosexuality. It is also expressed in the play through the dialogue about what is ‘normal.’ Amanda (Rachel Postle) insists that ‘very few people are completely normal, deep down in their private lives.’ One could interpret that as meaning there is no such thing as ‘normal’ sexuality — thus condoning experimentation and irregularity, at least of that period of time — including homosexuality.”

Peterson adds, “Both the characters of Amanda and Elyot (Joe Rux) are rather androgynous, not fitting into the societal expectations of how a husband and wife should behave to each other, at least in 1930. Neither of them conform to what their new spouse’s expectations might be. ‘Certainly you would like a little quiet womanliness after Amanda,’ Sibyl (Dani Pazurek) quips to Elyot. Victor (Rick Lamers) is appalled at the rather masculine beliefs of morality of his new bride, Amanda. Elyot and Amanda both possess an ‘alternative’ sort of moralism which some critics say can be defined as including homosexuality. Coward’s own homosexuality may influence many of these theories.”

Stephanie Gleeson plays the juicy role of the French-speaking maid. Peterson is always a sure hand when it comes to directing classic plays, just as Theatre in the Round rates as one of the region’s best ongoing producers of the classics. 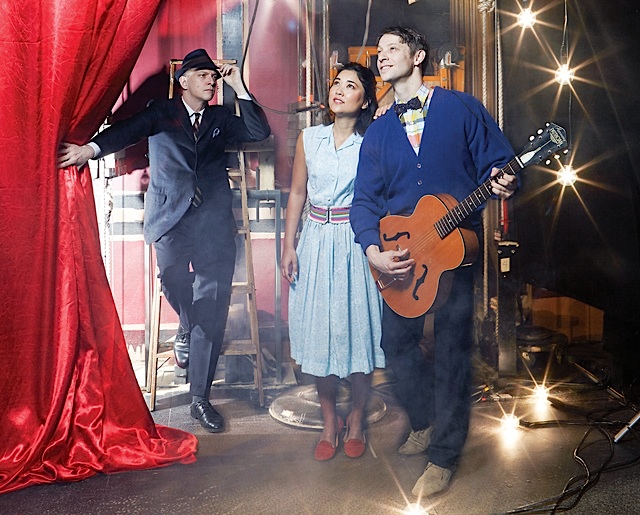 Favorites from the local music scene are in full form in the Jungle’s summer rock fable and 2015 Drama Desk nominee for Best Musical, Fly By Night. Chris Koza stars in the lead role and John Munson of the New Standards and Semisonic plays in the house band on bass. Other notables include guitarist Dan Schwartz, Jeremy Ylvisaker, and music director Mark Christine on keyboards. Early rock ‘n’ roll, folk-like guitar, classic musical comedy music style, and the rock theatrical tradition are blended into the aesthetic conjured by its original creators, Will Connolly, MIchael Mitnick, and Kim Rosenstock.

Koza plays a New York sandwich maker caught between two sisters (Royer Bockus and Leah Anderson) from North Dakota during the northeast blackout in 1965. Fly By Night is perhaps the most notable touchstone about that unnerving event since the 1968 film, Where Were You When the Lights Went Out? and its silky theme song by The Lettermen.

Jim Lichtscheidl plays the narrator, having recently returned from London’s West End where he played a major role in Nice Fish opposite Oscar-winner Mark Rylance. Joshua James Campbell, known for his memorable performance in Jungle’s The Glass Menagerie, and James Detmar, who gave a hard-edged performance in the Ordway’s recent West Side Story, round out the cast. 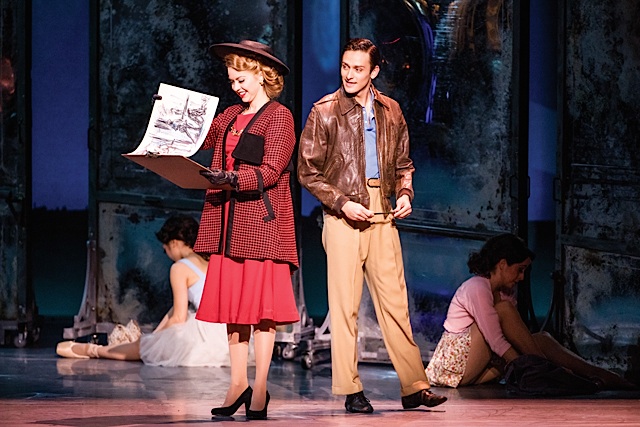 An American In Paris. Photo by Matthew Murphy

An American in Paris won six Oscars including Best Picture of 1951. Its music and lyrics by George and Ira Gershwin, with additional music by Saul Chaplin, are among the most beloved of film musicals. The recent smash hit musical film, La La Land, compares to An American in Paris because of its simple love story that champions romance in a major world city. That itself seems to point to the reality that love and romance are as perennial as the grass. Therefore, it makes sense that An American in Paris, originally created for the screen, should be adapted for the stage. Hard to believe it took over 60 years!

In 2015 An American in Paris was the most-awarded new stage musical winning four Tony Awards, and (not surprisingly) Christopher Wheeldon won Best Choreography. If you’ve seen the Vincente Minnelli film starring Gene Kelly, you get an idea of just how beautifully demanding the dance challenges are. The show and film have notable contrasts between vocals and orchestral music. The former includes unforgettable tunes such as “I Got Rhythm,” “‘S Wonderful,” and “But Not For Me.” The latter includes “Concerto in F” and “Second Rhapsody/Cuban Overture.” If you think you don’t know these tunes, you may be mistaken. They are part of our cultural fabric despite all of society’s ups and downs over the past half century plus. Just further proof that An American in Paris still speaks to timeless themes.

Moreover, how synchronistic that the man who wrote the book for the musical was born in 1951. Craig Lucas is known to musical buffs for his 2005 smash, The Light in the Piazza, for which he was Tony-nominated for his book, just as he would come to be Tony-nominated for his An American in Paris book. Lavender readers may recognize Lucas’s name because his gay and bisexually oriented dramas The Dying Gaul and Small Tragedy were named among the magazine’s 10 best productions in years past.

Randy Harrison is a popular figure in queer entertainment because of his role in Showtime’s Queer As Folk series. He was also in Minneapolis last year in a beguiling performance as the Emcee in the national tour of Cabaret and played Boq in Wicked on Broadway. However, local theater audiences actually know him better as young Tom Wingfield in the Guthrie’s 2007 revival of The Glass Menagerie.

Harrison is back on the Guthrie boards in artistic director Joe Haj’s summer musical offering, in Sondheim and Lapine’s Sunday in the Park With George. He plays the role of French Pointillist painter George Seurat originated in the 1984 Broadway production by Mandy Patinkin. The dynamic Erin Mackey, who threw the proverbial mirror up to the audience in Haj’s revival of South Pacific last year, will play the musical’s other major role, Dot, Seurat’s model and lover.

Sunday in the Park with George was innovative in musical theater in 1984. Conceptually it took risks that few Broadway productions ever have. And it’s principal conceit is still very powerful: Seurat’s 1884 painting, A Sunday on La Grande Jatte, is the visual image that the musical’s story attunes to. Artistic obsession and patterns between the present and the past are explored to fascinating effect. 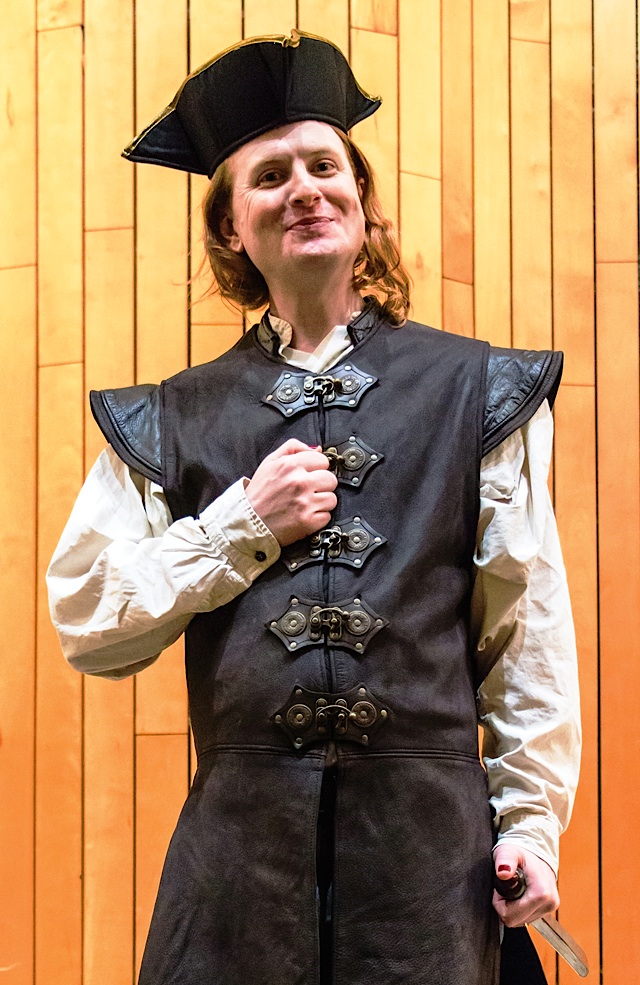 The Pirates of Penzance. Photo by Brian Geving

On Pride weekend One Voice Mixed Chorus, Minnesota’s GLBTA Chorus, presents a gender-bending take on the popular Gilbert and Sullivan opera directed by Gary Briggle. It features a lesbian pirate king and a swarthy sailor crew that arrives by speedboat on the Mississippi River. Eyebrows may go up when we meet the Major General’s daughters.

Anita McColley plays the Pirate King. Joselyn Fear plays Major-General Stanley along with Brock Metzger as Frederic and Samuel Baker as Mabel. The production is free admission, although it is suggested that you still contact the website to reserve a space. Bring a lawn chair and gussy yourself up in your pirate costume. Audience members will be encouraged to celebrate and to chow down on delicious food truck selections.