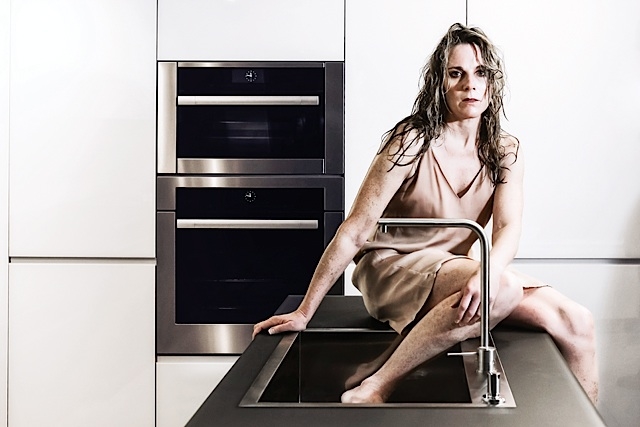 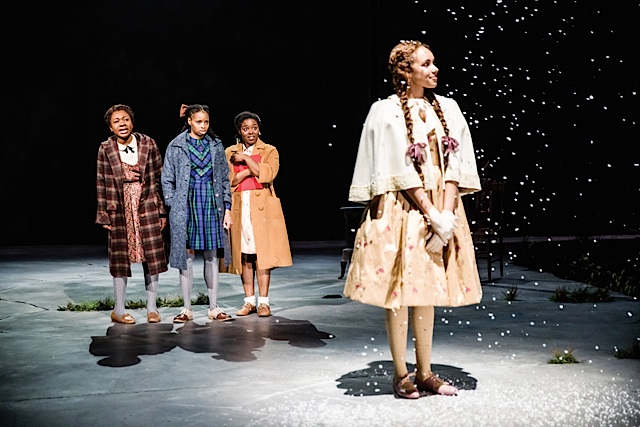 The Guthrie has staged a shattering production of The Bluest Eye from the Toni Morrison novel, adapted for stage by Lydia R. Diamond. Brittany Bellizeare brings heart-wrenching vulnerability to the lead role of Pecola Breedlove, a young African American girl who acutely feels the ostracism from her own community of color because of her family’s supposed strangeness and from a white majority culture that sees black children and adults as inferior. Worse still, her home life is wracked with alcoholism and violent “rage-aholism” that sees children as unworthy of mental, emotional or physical kindness.

Director Lileana Blain-Cruz has shaped The Bluest Eye into an utter nightmare on stage, but it sneaks up on you. Matt Saunders’s desolate minimal set surrounded by weeds, matched with Blain-Cruz’s equally minimalist staging tips us off. We go from three sweet little girls endearingly portrayed by Bellizeare with Carla Duren and Deonna Bouye as her two friends, living in the naivete that little girls should live in, to a world of adult meanness that no child, even the strongest, cannot survive.

Even beloved actors of color like Regina Marie Williams and Shawn Hamilton, who local audiences have come to know for their wonderfully likable performances, border on the monstrous. Williams epitomizes harsh parochial judgment foisted onto a child and her family. Hamilton, in what is surely one of the most chilling passages in contemporary drama, plots an evil act (the kind you won’t read about in newspapers) for an unwittingly innocent Pecola to put into motion. In the role of Soaphead Church, a riveting Hamilton justifies this action as a misguidedly righteous complaint, Job-like against God. It begs the question of shouldn’t the church have intervened on behalf of goodness? It’s as if the church, and by extension, God, has totally failed the people. A bitter underlying commentary indeed.

Arguably the production’s most unsettling performance is not J. Bernard Calloway’s powerful turn as Cholly, Pecola’s abusive father. But it is Stephanie Berry as Mrs. Breedlove in a performance where violence simmers just beneath the surface. It’s a dangerous performance, that on the one hand challenges our will to sympathize, but on the other hand, Morrison/Diamond make it clear what the woman is up against within her own community and the racial/gender prejudice of white society.

Diamond creates a thorny lyricism from Morrison’s gritty and boldly confrontational original text. Diamond’s drama, Stick Fly, at Park Square was named as Lavender‘s Best Production of 2013. She is a playwright to be reckoned with. Where Stick Fly unearthed thorny truths about the black financial/social elite, The Bluest Eye, does the same about blacks at the mercy of poverty, prejudice, and the indignities those install into our culture. 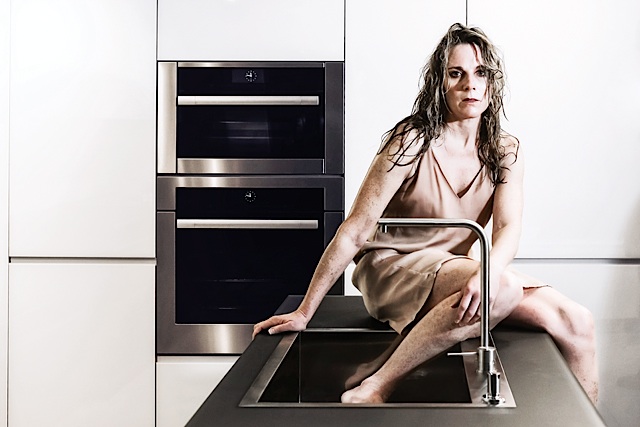 New Epic Theater has been producing gay master playwrights and classics with homoerotic undercurrents frequently and passionately since its inception a few years ago. Tennessee Williams and William Shakespeare to name a few. So their newest production continues with the gay master playwright from Athens in the Fifth Century BC: Euripedes, and one of his most famous tragedies, Medea, featuring Michelle O’Neill in the title role at the Lab Theater space.

Euripedes is legendary for his depictions of women in dire situations. The Trojan Women defies Athenian patriotism and sympathizes with the women taken prisoner at defeated Troy, the fabled enemy of Greece. Iphigenia at Aulis also defies with its sympathies for a daughter sacrificed to the gods by her military general father in hopes of victory. Medea, his most renown play, is about a queen who rages against her husband who takes on a younger wife. New Epic is interpreting the adaptation by Rachel Cusk.

Director Joseph Stodola says, “Euripides was absolutely a controversial writer. Audiences in ancient Greek theater were all male and Medea was shocking to them. The play illustrates a female attack on the patriarchy and on cultural institutions that define femininity and masculinity. Since it was first written, this play has been used to test our preconceptions of gender and accept a new, more complex reality.”

Stodola points out that “Euripides was married twice in his life; neither marriage ended well. He was the subject of public ridicule because of his engagement in long-term homosexual relationships, which were acceptable only when short-lived during that time. Medea begins the play in grief and isolation. Euripides’ investment in and defense of her seems to me to come from an identification with her pain. Here, the homosexual becomes the feminist, using his own grief as a way to tap into universal truths. Controversial indeed. No wonder all these men in ancient Greece were offended.”

Controversies over race and representation in drama are always filled with drama in themselves. Walking Shadow explored cross-gender representation in their staging of Jeffrey Hatcher’s Compleat Female Stage Beauty in 2012 and now they’re probing racial questions. Red Velvet by Lolita Chakrabarti features JuCoby Johnson in the principle role of Ira Aldridge.

Director Amy Rummenie elaborates, “Red Velvet addresses the nearly forgotten story of Ira Aldridge, the first African American actor to achieve success on the international stage. In 1833, Aldridge played Othello at Theatre Royal Covent Garden, 230 years after it was written, and when the leading tragedians of the age played it in blackface. Unfortunately, Ira’s moment to shine landed right in the middle of protests surrounding the vote to abolish the slave trade in British colonies and he was hastily sent away.”

She adds, “This play takes a serious look into race-appropriate casting practices, but even more than that, it looks at the politics of being the first person to stick their head about the parapet, rising to their personal best in the face of near-certain danger. It’s a play for the chance-takers, and those who either support or fail to support them.”

Sally Wingert plays the iconic role of Dr. Vivian Bearing, a professor who struggles with illness, in the Pulitzer Prize-winning drama Wit by lesbian playwright Margaret Edson. Director Benjamin McGovern says, “Wit is full of robust, complex language that somehow manages to be both erudite and accessible at the same time. Vivian, the play’s protagonist, is a brilliant scholar but is constantly hiding from her emotions by retreating into complex intellectual analysis that cleverly keeps her feelings at bay. Margaret Edson has packed the play with dazzling metaphysical ideas spun from the poetry of John Donne, Vivian’s principle subject of study. But Edson is ultimately telling a story about the need for human connection, and some of the play’s most poignant moments are simple and spare.”

Actresses Tracey Maloney and Linda Kelsey are featured in Amy’s View, the 1997 David Hare play that muses on the relevancy of art and has us consider the higher advantages that written fiction and drama sometimes have over film. This play has been widely produced and its appeal 20 years later will likely be to those who are concerned about where the human being in the arts is going. From being overcome by technology to government budget cuts for the arts in this new political era. Hare is known for his powerful screenplay for the lesbian-focused The Hours, and for his jolting earlier drama Plenty, made into a forgotten but remarkable film starring Meryl Streep. 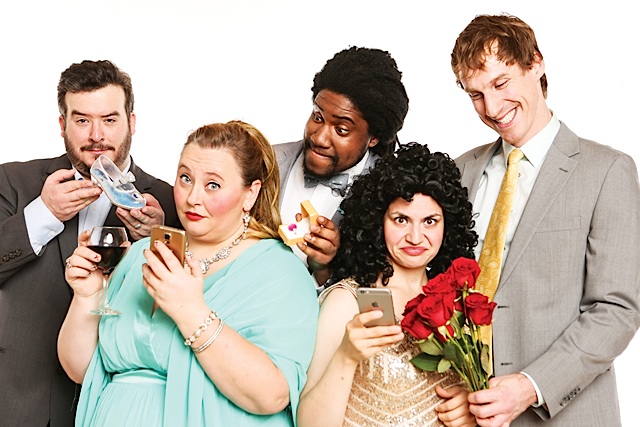 Booty and the Beast. Photo by Dani Werner

This inspired new comedy revue does not exclude the problems of the gay hook-up scene. Denzel Belin is a relative newcomer to the region’s oldest comedy theater, Brave New Workshop, and he is an absolute scream as a gay man of color trying to find Mr. Right. Prospects include Tom Reed who shines in full-blown high-maintenance snowflake goofiness and Ryan Nelson as a snooty gentleman type who appreciates the BBC, and that doesn’t mean British Broadcasting Corporation either!

Booty and Beast is genuinely hilarious but always has a heart, as in the heartache that comes from pursuing love through apps (Buzzfeed, etc.) with myriad people who don’t tell the truth about who they are. It also comments on the pariah-status that one may suffer just from being single. And moreover, that some people actually may like to be single, by choice! Worse still, for those who actually want connection, this revue acknowledges that sexual chemistry isn’t always as abundant online as we are steered to believe. When sexual chemistry is reduced to Wham Bam, one’s self image may be jerked into jeopardy. Not to mention that one’s real sexual needs don’t actually get met.