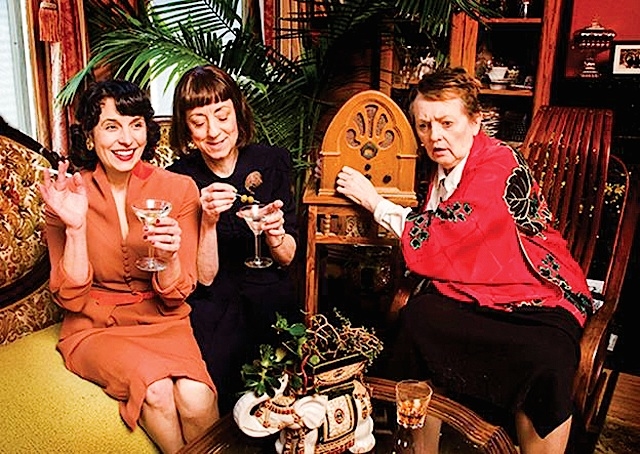 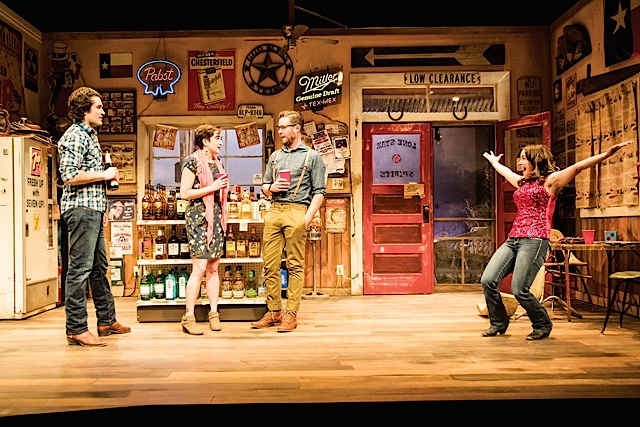 Jungle Theater artistic director Sarah Rasmussen once again delights with her signature comedic flair in Lone Star Spirits, the crackling Off-Broadway hit, written by her husband, Josh Tobiessen. When Marley (Thallis Santesteban), a young woman who has been living in Austin, returns to the small Texas town where she grew up, she is confronted by her unhappy memories, including Drew (Nate Cheeseman), a high school love and knucklehead who still imagines he is a champion football hero. It’s as if ghosts from her past have been made tangible.

Santesteban emanates a condescending edge, along with her somewhat nerdish city-boy beau, Ben (a charming John Catron). Terry Hempleman is absolutely terrific as her good-ole-boy dad, who Marley came to immature conclusions about long before and has yet to have the good sense to revise them. Christian Bardin almost steals the show in an uproarious turn as Marley’s friend from youth, Jessica. You could say that Jessica is a force of nature who compels us to reassess our fixed views and just have some fun. Bardin’s performance is a real treat! It’s also nice to see the small town folks get one-up on the unearned superior attitudes of city-slickers.

When a young woman of color finishes graduate school, she finds that something blocks her opportunities for happiness. As she journeys to discover just what that something is, she finds it within herself. This musical looks into becoming an independent woman who doesn’t need a job or another person to define her. A new acclaimed work by Zakiyyah Alexander and Imani Uzuri, with poetry by Sonia Sanchez. 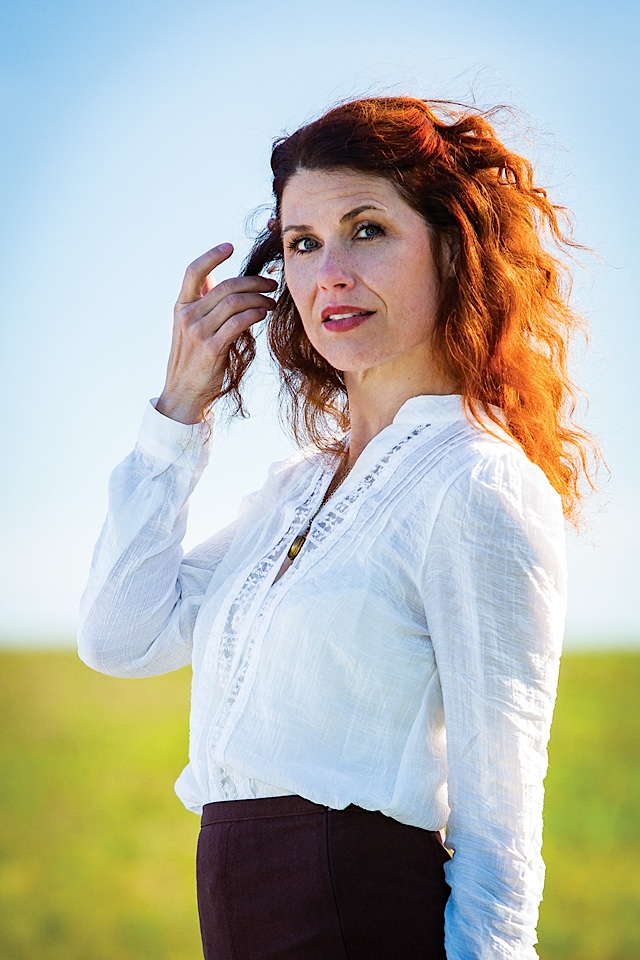 When Minnesota legislators formed the Minnesota Commission on Public Safety in 1917, German immigrants were the largest ethnic group in the state. Despite their numbers, Germans in Minnesota quickly came to be stigmatized by World War I. It is into this atmosphere that a woman came to the Land of 10,000 Lakes from Germany to marry a stoic bachelor farmer she had never actually met.

Sweetland, the musical tells their story with a book for the musical by Perrin Post and Laurie Flanigan Hegge. Music is by Dina Maccabee, lyrics are by Hegge. You may be familiar with the title because it is inspired by Ali Selim’s beloved Minnesota film Sweet Land, and Will Weaver’s acclaimed short story A Gravestone Made of Wheat. Moreover, Post also directs. You may recall her enormously entertaining Buffalo Gals Productions whose highlights include Broadway’s Legendary Ladies, Zombies from the Beyond, and Martinis, Girls, and Guns.

20% Theatre Company Twin Cities continues to provide opportunities for the production of queer-oriented stage work. Two sets of shows reflect on marginalization and the narratives that reinforce that. In Set “A” The Smitty Complex by Devin Taylor features an otter who asks the question: “What am I?” It is coupled with These Floating Bones created and performed by Nadia Honary. This piece uses film, dance, poetry, and music to find answers to questions about birth, death, and transcendence through movement.

In Set “B” even the way the titles are stated pushes the edges. “_________,” written and directed by Sami Pfefeer, is a collaboration with co-director Kai Greiner and performers Beckett Love and Suzi Love. “______” also plays this set. It is a ghost story that examines cruelty and abuse. Also featured in Set “B” is “e,” created and performed by Simone Bernadette Williams and Holo Lue Choy. Two queer trans people of color use an interdisciplinary artistic format to comment on stereotyping of trans-femme bodies (what is described as “the exploitation of queerness and eating disorders’ attachment to dysphoria”) and ideas about how cis and heteronormative society can silence those who don’t align with its binary approach. “e” stands for exposure, empathy, estrogen, elevation, enigma, and evil. 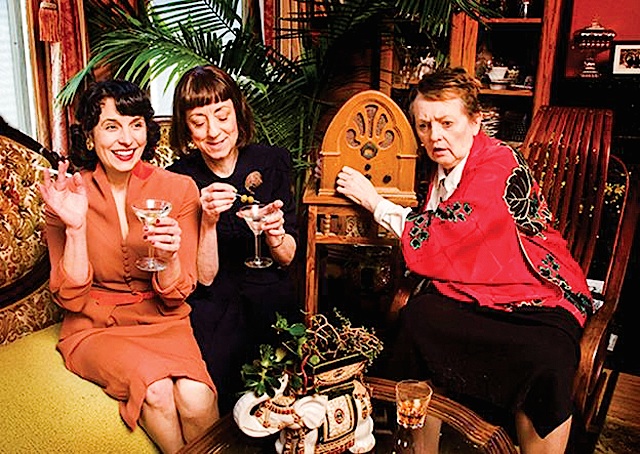 Prime Productions, a new professional theater company, is committed to “illuminate and support women over 50 and their stories through the creative voice of performance.” Their inaugural production, Little Wars by Steven McCasland, conjures a dinner party or salon, if you will, of some of the 20th century’s most brilliant female literary figures: Dorothy Parker, Agatha Christie, and Muriel Gardiner. Others present include Lillian Hellman (Vanessa Gamble), playwright of the groundbreaking lesbian drama The Children’s Hour, not to mention many other remarkable works and perhaps the most renown lesbian couple of modern times, Gertrude Stein (Candace Barrett Birk) and Alice B. Toklas (Sue Scott of Prairie Home Companion fame). It plays at the Mixed Blood Theatre space.

Director Shelli Place shares, “Gertrude Stein and Alice B. Toklas met in Paris in 1907; a flame was ignited and burned for nearly 40 years. Although their companionship was accepted in the intellectual circles of Europe and their 1934 tour of America was lauded, they were always haunted by Gertrude’s brother, Leo, describing them as ‘abnormal vampires.’ They became known for their cultural salons, gathering the likes of Hemingway, Fitzgerald, Picasso, Matisse, and Chaplin among others. It is usually perceived that Alice stood in Gertrude’s larger shadow. On the contrary, she took an active part in these literary and art conversations that ‘swirled’ in the afternoon and went into the wee hours. Little Wars provides us an insider’s look into a fictional salon held in the French Alps in June 1940.” 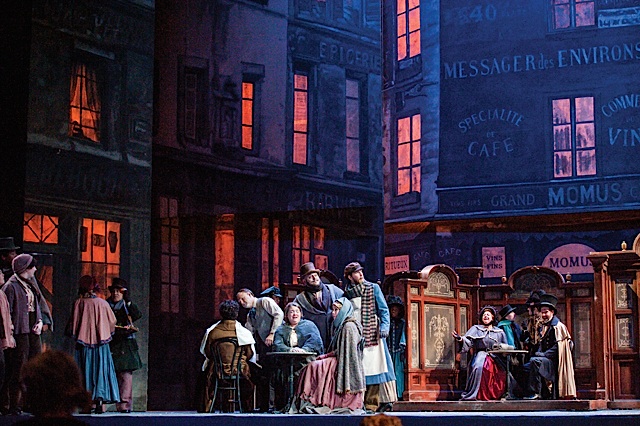 La Bohème, which premiered in 1896, was the Giacomo Puccini opera that gave Jonathan Larson the inspiration for the musical Rent. The GLBT community turned Rent into an emblematic event with its straight, bi, gay, artistic, and HIV-positive characters intersecting in a crisis situation. La Bohème was also remarkably inclusive in its own time when Victorian values ruled Western culture. Bohemians referred to those Paris denizens who lived on the edge as artists who transgressed the norms of the time, including strict sexual norms. This production of La Bohème originates from the San Francisco Opera.