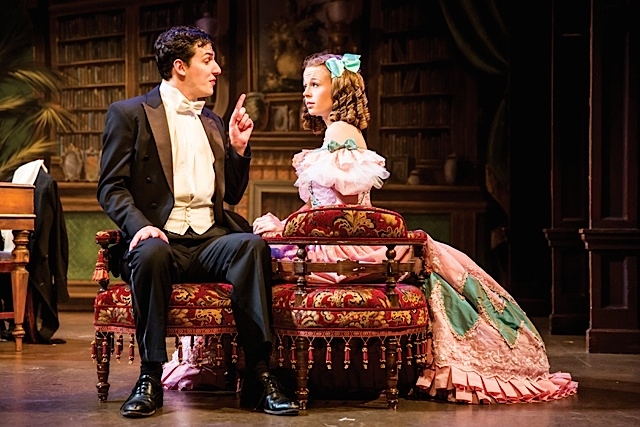 Under the Gaslight. Photo by Dan Norman 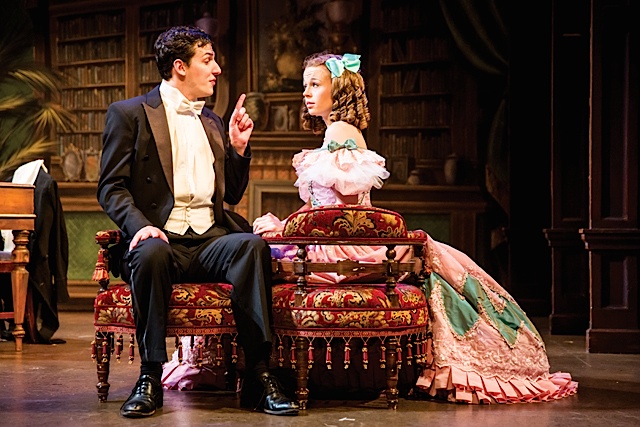 Under the Gaslight. Photo by Dan Norman

This year’s Minnesota Centennial Showboat is bittersweet because it is the last year the annual melodrama with musical olios will be presented. As usual, it features University of Minnesota student actors in a professional situation. The farewell production is an American classic: Under the Gaslight, by Augustin Daly, which was the inaugural Showboat production in 1958. The script deals with marriage, class, and identity.

Former Guthrie Associate Artistic Director John Miller-Stephany, known for his astounding productions of other American classics, 1776 and A Streetcar Named Desire, has staged the show and says “the young actors in Under the Gaslight are simply terrific. They’re talented, extremely hardworking, and dear. You’d never know when watching a performance that quite a few of them felt they were working well outside of their ‘comfort zones’ during rehearsals. Not many of them have had experience working in this style but they’ve developed into a powerhouse ensemble that knows just how to work the material.” 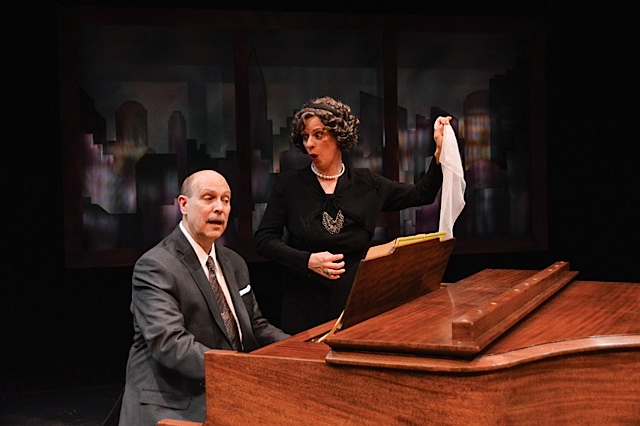 Before or after you see the new Meryl Streep film, Florence Foster Jenkins, I suggest you catch the comedy with music, Souvenir, by Stephen Temperley, live on stage at the Commonweal Theatre in Lanesboro. The Manhattan socialite said, “People may say I can’t sing, but no one can ever say I didn’t sing.” Wild comedy emerges from the fact that Jenkins sings off key more than on. Stela Burdt plays Jenkins and Stephen Houtz plays her pianist.

Burdt shares, “I’m amazed at the impact she had on audiences who came to laugh at her, and wound up adoring her. In this show, we get to see not only the public persona of Florence Foster Jenkins, but the very human side of her that comes through as we watch the blossoming of her special working relationship with accompanist Cosme McMoon. It’s like watching her find her artistic soulmate.” 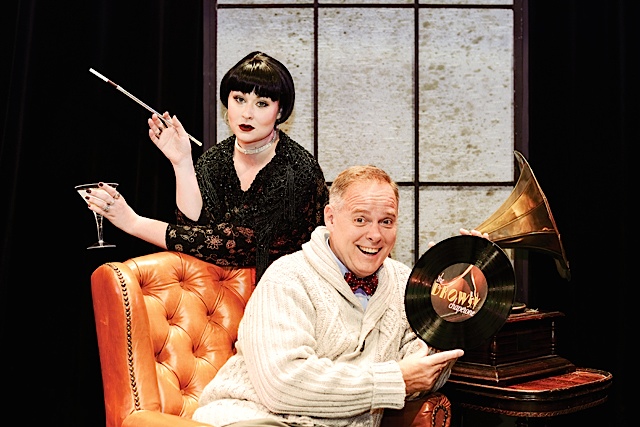 Artistry, formerly known as Bloomington Civic Theatre, launches its 2016–2017 with the escapist and imaginative Tony-winning Best Musical set in the Roaring ’20s, The Drowsy Chaperone. The conceit is an avid theater fan sitting in his humble abode listening to the music of his favorite musical (a fictional musical written in service of this musical) titled The Drowsy Chaperone. It involves an oil tycoon and a Broadway star who are about to marry; however, gangsters try to foil the marital plans in hopes of financial gain.

Tod Petersen plays the role of the fan and, if you know his impressive body of work, you can imagine he is perfect for the role. He recently gave a fine performance in Gypsy for the Theater Latte Da/Hennepin Theatre Trust production.

Petersen shares: “The character I play, Man in Chair, is interesting in quite a few ways. We never learn his name, he’s just Man in Chair, so that makes the blocking easy. I’ve got more lines than I’ve ever had in my life, so that’s not so easy. Also, interestingly, Man in Chair doesn’t sing a note until the very end of the show. The best part is that I get to sit onstage and watch the super-talented cast put on a show just for me in my super-comfy chair!”

Director-choreographer Michael Matthew Ferrell wowed audiences last year with his inspired staging of Hairspray for Artistry and odds are, given his brilliant track record, The Drowsy Chaperone will also deliver. He shares, “The Drowsy Chaperone does exactly what it’s intended to do. It offers us a brief escape from the real world and transports us to a rollicking 1920s Broadway musical comedy. Life-changing probably not, but an evening of pure joy…which is just what we could all use in these challenging times of violence and hate.”

With Sarah Rasmussen at the helm of the Jungle Theater as artistic director we are finally seeing, once again after a long dry spell, a stage that breathes with life. For too many years, the Jungle almost slogged into a combination of revivals of past productions of their own work, classic works already often produced at other theaters, and occasional newer plays that sometimes hit or missed.

However, just this year we’ve seen Rasmussen’s own vibrant all-female revival of Shakespeare’s Two Gentlemen of Verona and an enthralling production of the groundbreaking gay-themed play, Le Switch, by Philip Dawkins and directed by Jeremy Cohen. To be clear, an artistic director doesn’t typically direct all shows at their theater, but they oversee play and director selections. This is everything. (And in the case of Rasmussen, as with the Guthrie’s new artistic director Joe Haj, she is a first-rate director in her own right.)

The upcoming show is one that clearly shows a departure from the old Jungle ossification. OBIE-winning director Marion McClinton makes his Jungle debut with a hot recent play by Idris Goodwin with a jazz score by the accomplished Justin Ellington. Two local favorites, Ansa Akyea (Huck Finn at CTC) and Darius Dotch (Colossal at Mixed Blood), play brothers Bilal and Eric. One plays classical piano, the other jazz bass. One is Christian, the other Muslim. One is in jail and one is not. Clearly, this is a play that beats to the issues that have been playing out in society today. A strong choice for the new Jungle. 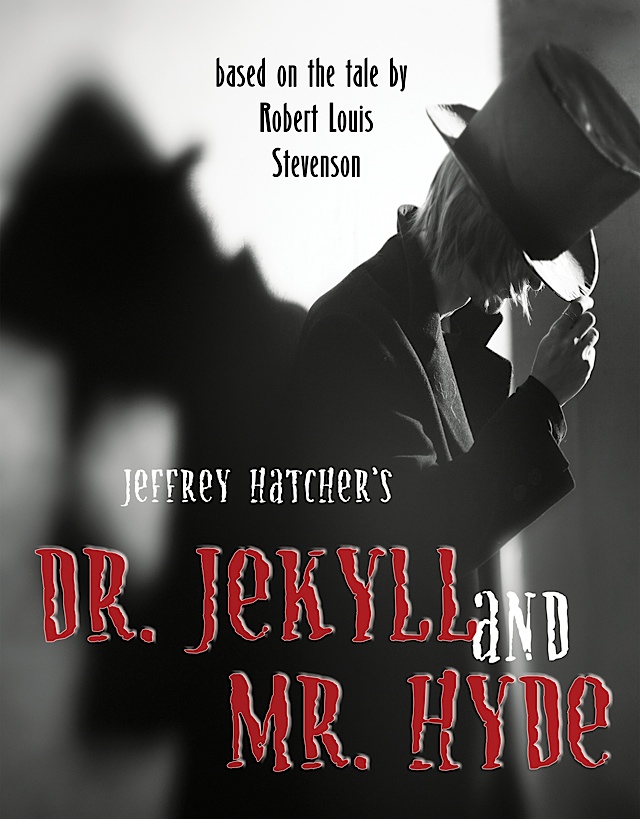 Dr. Jekyll and Mr. Hyde. Photo courtesy of Theatre in the Round

Theatre in the Round Players is launching their 65th season. No theater within the city of Minneapolis proper has been around that long. Prolific and internationally acclaimed local playwright Jeffrey Hatcher’s adaptation of the Robert Louis Stevenson horror novel befits TRP’s long-standing commitment and high standard when dealing with classic material. This version of Dr. Jekyll and Mr. Hyde has one actor playing the good Dr. Jekyll while others play the darker and meaner sides of his disturbed personality. In a year when identity politics has become a lightning rod in a way that it has never before, this is a seminal work worth returning to. It examines the nature of identity at its most psychological level.