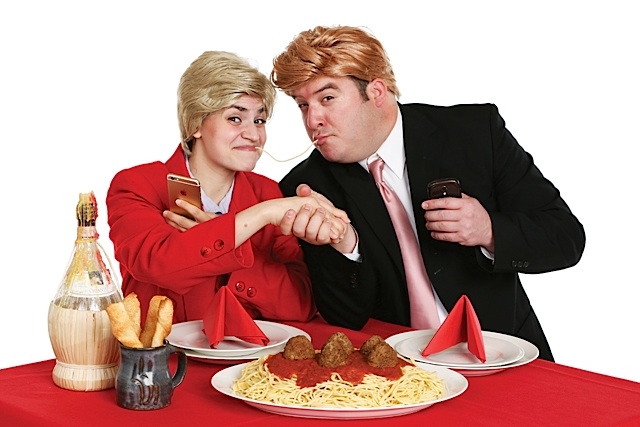 Lady And The Trump. Photo by Dani Werner 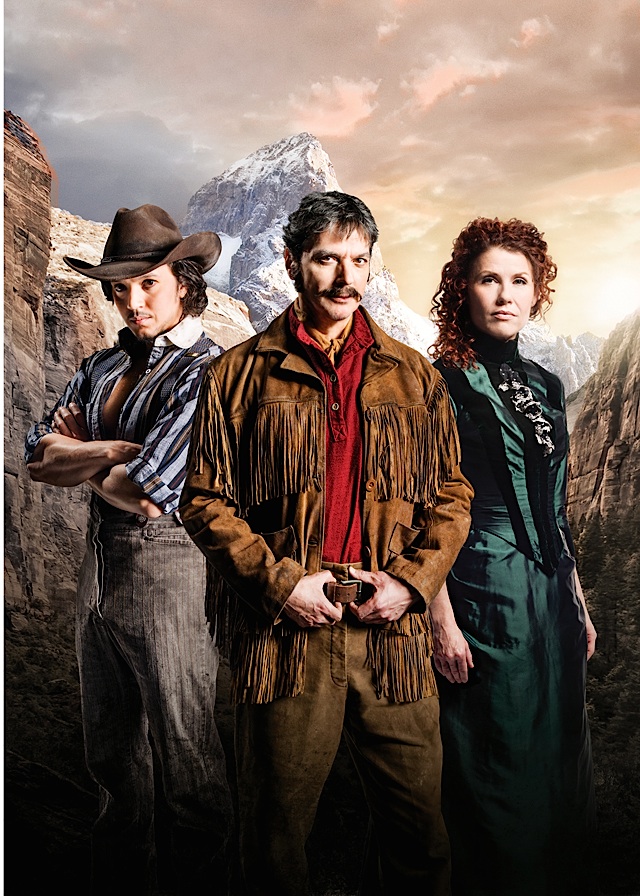 The Ordway is teaming up with Seattle’s 5th Avenue Theatre for a major revival of Paint Your Wagon. Odds are that this will be quite a show since the two theaters previously teamed up to give us the best Cabaret production ever in the Twin Cities. Director David Armstrong relates, “Paint Your Wagon is quite unusual in that it is, at the same time, both iconic and rarely seen. The title and songs are very well known, but the show is seldom produced. Hopefully, this new version will change that. I was hired to direct a production of Paint Your Wagon in Sacramento nearly 20 years ago. In spite of the weak storyline, the audience had very strong responses to the show — they loved being in the world of the gold rush and, of course, the score had a great impact. I thought at the time that if someone could successfully create a new book for the show it could join the ranks of Lerner and Loewe’s other great classic musicals (My Fair Lady, Camelot). About eight years ago we began discussions with the Lerner and Loewe estates to make that happen. We commissioned Jon Marans to create a new story that would more accurately reflect the multicultural true history of the gold rush. All along we tried to the best of our limited psychic abilities to figure out what Lerner and Loewe might do if they were writing the show for a modern audience.”

Armstrong adds, “We have incorporated the majority of the original Broadway score into our new version, plus two songs that were created for the film version. And, we have thrilling new orchestrations and musical arrangements that bring a ‘newgrass’ feel to the songs which, of course, were originally inspired by western, folk and roots music of various kinds. However, to ensure that we can still deliver on the Aaron Copeland-esque aspects of the score, the orchestra includes french horns.”

The Guthrie has landed the rights for the area premiere of one of the biggest plays of the decade. Dramaturg Carla Steen comments: “As the most produced play in the country this season, Disgraced is almost a phenomenon. And it’s easy to see why: it’s very well crafted, entertaining, topical and timely, and very human. Ayad Akhtar’s play is populated by a very specific group of people, overachievers living on the Upper East Side of Manhattan, who reflect diverse cultural or religious backgrounds. They almost personify the American dream fulfilled, and together they form a successful vision of a melting pot or mosaic America. But achieving or maintaining the American dream is easier for some people than for others, and Disgraced offers a look at how it can get derailed, in this case for Amir, a Muslim American lawyer. Despite the humor in the play, Akhtar doesn’t make it easy for the audience to witness Amir’s crash. It’s almost a variation on Arthur Miller’s ‘tragedy of the common man’ for a new generation.”

Steen adds, “Director Marcela Lorca is approaching the play with a great deal of empathy, recognizing that everyone has faults and failings, and the more empathy we can bring to looking at someone else’s experience, the more likely we’re going to find ways to solve some of the biggest problems facing us as a society. Akhtar is a truly exciting voice in the American theater, and over the next few years I look forward to seeing how his work evolves and how he continues to put hard questions to us about the world we live in.” 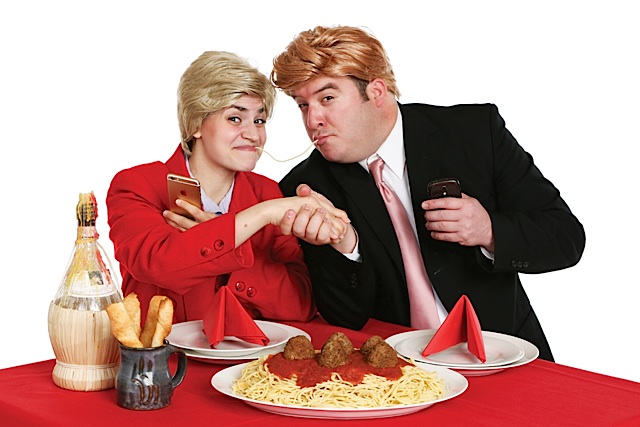 Lady And The Trump. Photo by Dani Werner

The current company collaboration by the region’s premier comedy theater is a dynamically clever revue that spoofs the election season. Brave New Workshop not only mines the humor, obvious and not so obvious, pertaining to Donald Trump and Hillary Clinton, it also casts a giddy eye on the mis-steps of Ted Cruz and one literal misstep by Carly Fiorina. Not to mention what was the roller coaster ride of the Bernie Sanders campaign that challenged the Democratic Party establishment.

Five actors form a tight ensemble that flickers from scene to scene to scene. All are uproariously daffy but most notable is Ryan Nelson as “The Donald.”  Nelson gave us a solid Trump in last year’s BNW revue, The Trump Who Stole Christmas, but he didn’t go for broke. This time around, Nelson gets the nuance, inflections, and irreverent spirit of the controversial GOP candidate with bombast and breeziness. A unique and winning combination. It’s an uncannily observed performance that might possibly lead to a new career as stock Trump character, should the GOP win the White House this fall.

That said, Lady and the Trump is surprisingly nonpartisan. Clinton’s email scandal and ego are brightly satirized by Lauren Anderson and a blond-wigged Taj Ruler as a Hillary alter-ego trapped behind glass. This idea is beguilingly reminiscent of Lewis Carroll and marks one of those splendid BNW moments where raucousness transcends to the level of true Theater of the Absurd. Anderson’s Hillary becomes a Queen of Hearts of sorts who gloats over a defeated Bernie, played to clown-show effect by Ruler.

In another delicious nod to the absurd, Nelson also shines as Jeb Bush, played as a man invisible to all around him until certain parts where he speaks and everyone around him freaks out. Ruler and Tom Reed whack out as new age-y female and male buddies who spin into cyber rages against one another as a Hillary and a Bernie backer. Tech director Matthew Vichlach has shrewdly overseen some stunning footage of Cruz forcing himself on a girl in order to kiss her at a campaign rally. There is also a wonderfully strange film section of Andy Kraft as a shape-shifting being who ultimately snaps into regretful consciousness when he realizes that he has been a tool to discombobulate the GOP. Vibrant music direction by Josie Just. Inspired stage direction by Caleb McEwen. 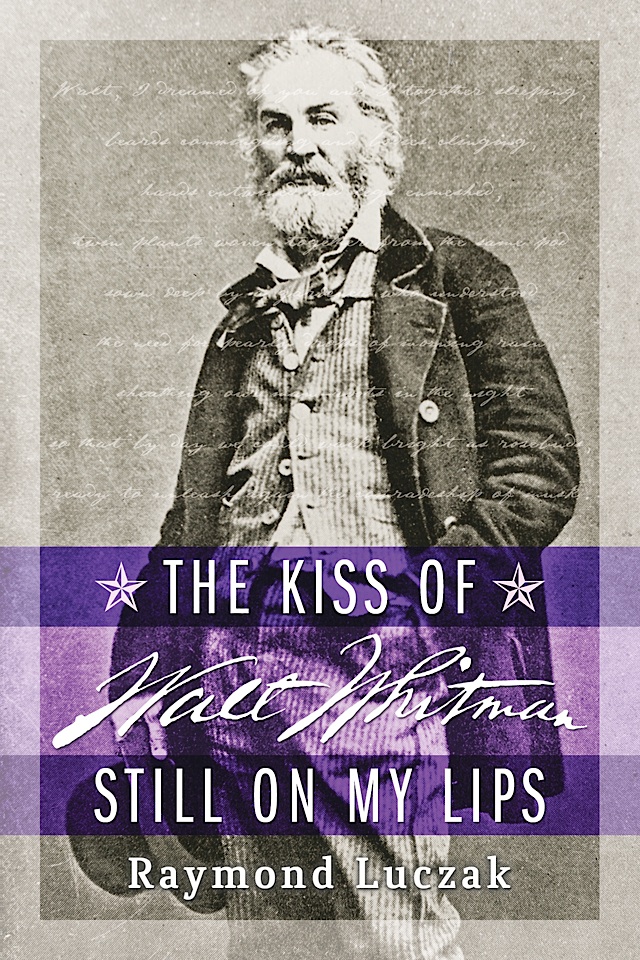 The Kiss of Walt Whitman Still on My Lips. Photo courtesy of Squares and Rebels

The Kiss Of Walt Whitman Still On My Lips
www.squaresandrebels.com

To read Raymond Luczak’s poetry volume, The Kiss Of Walt Whitman Still On My Lips, is to not only vibrate to the echoes of the 19th century, but to also feel the vibes of gay writers of the sexual revolution era such as novelist John Rechy and poet James White. Known recently for his editorship of A Queer Disability Anthology, Luczak has a heightened sensitivity to the problem of marginalization in our current day, so this volume has a unique resonance across the ages.

That uniqueness reflects Luczak’s core connection with how men loved one another in the 1800s in contrast to how men have come to love, and at times exploit, one another over the past half century. “Rings of kisses and gropes were sacrosanct / behind the shuttered eyes of storefronts.” Much of the volume delves into that long-past time with references to Oscar Wilde as well. Contemporary Minneapolis is referenced, too: “I dream of catching you Walt on the smoking patio / behind the Minneapolis Eagle. You’d wear a t-shirt, / jeans and sandals; / hold up a pint of lager in your hand. / Kiss me in front of everyone.” The poem goes on to plumb the bittersweetness of unrequited idealized desire.

This points to the deep concern Luczak has about gay alienation, something that legislation cannot solve. Being an older gay man in the age of the internet, or even a younger one who does not (or cannot) adhere to male beauty myths, are sublimely related. “Still no emails, no texts, no calls from my gardener: / he must have gone up north for the aurora borealis, / the darkness paint-sprayed with green and glow. / The skies are full of stars, but I can’t find his eyes. / I am an unmapped constellation.”

Luczak acutely recognizes how age and beauty segregate gay and bisexual men in our time and how the brazen ubiquity of beautiful, often airbrushed, male bodies has fostered a dreadful sense of unattainability and wretched inadequacy. He writes with grim submission “Sex has lost its mysticism, / its wanton mysteries exposed like a magician’s secrets, / How the hell can I compete with the body I have?”