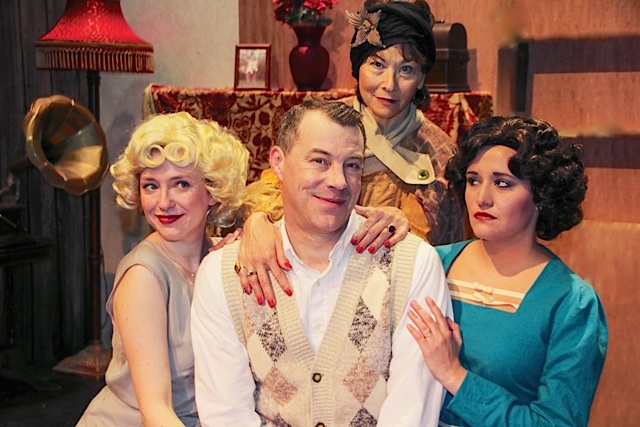 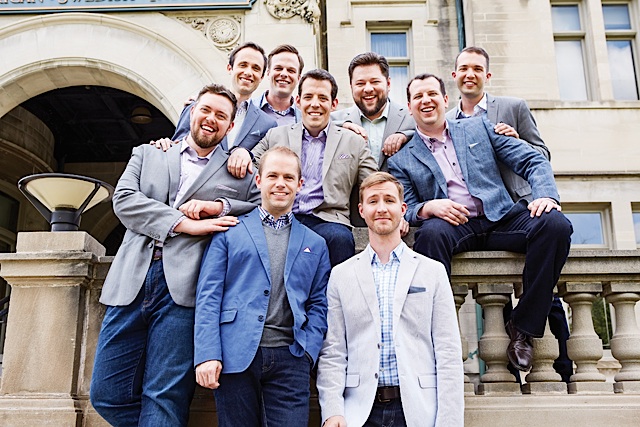 That dreamy men’s chorus, Cantus, has turned to The Beach Boys for summer inspiration. What pop group could better suit that? And what group is better suited to do justice to their lush harmonies than Cantus: “Wouldn’t It Be Nice,” “Sloop John B.,” “God Only Knows.” They are joined by a live band of accomplished players: Lee Blaske on keyboard and woodwinds, Jeremy Boettcher on bass, and David Schmalenberger on drums.

Chris Foss, Cantus bass, says, “Pet Sounds is a coming of age story with a bittersweet pastiche of songs recalling the pangs of unrequited love. Many say the album elevated pop recordings to a larger, grander art form — one that collectively lives and breathes together. That resonated with us and the album really speaks to the narrative program we strive to create.” 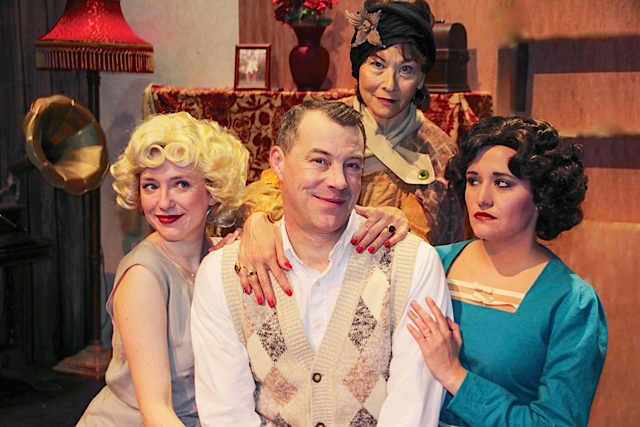 Noël Coward looms as one of the iconic gay playwrights for all time. He is best remembered for his mischievous high-brow wit, and did you know he was actually blacklisted by Adolph Hitler? He would have been arrested and murdered had the Führer successfully invaded England. Coward actually trained for espionage work with Ian Fleming who would go on to create James Bond 007.

Coward was known to be gay during the World War II years, but it wasn’t spoken of. His elegant and flamboyant signature style earned him both admiration and ridicule. He is beloved for his screenplay for the patriotic film gem, In Which We Serve (1942). Moreover, he not only also acted in the film, but co-directed it with David Lean. Yes! You got that right: the man who went on to direct The Bridge on the River Kwai, Lawrence of Arabia, Doctor Zhivago, and Ryan’s Daughter.

Coward was so highly regarded by King George VI, that the monarch wanted him to receive a knighthood but Prime Minister Winston Churchill stood in the way. He was also a lauded popular songwriter; “Mad Dogs and Englishmen” is a celebrated classic comedic tune. His most popular play, Blithe Spirit (1941), is a masterwork of his trademark light comedic style, but mixed with the dark edge of the supernatural. It suited the year it was created because the English audience needed to laugh, with the Nazis on the verge of nearly conquering them. That proverbial balance of light and dark.

At Artistry, director Ellen Fenster relates how Coward maintained a bright attitude in spite of it all: “Coward’s jokes are often at the expense of the upper class, the institution of marriage, and the war of the sexes. Yet somehow his plays don’t rely on cynicism to make their points. Coward’s keen insight and sharp wit entertains without alienating, something rare in modern playwriting.”

Red Eye Theater has long been the “go-to” place for experimental performance pieces. Its month-long series of new work is even edgier than much of its work the rest of the year. The New Works 4 Weeks festival is in full swing now. Therese Madaus’s Read My Lips / Don’t Lie (June 9–12) explores lip sync, drag, dance, and hidden desire. Lip sync becomes choreography and lips are limbs. The dance artists will consider masculinity, longing, and inquiring into what is real and what is not. Madaus performs with Megan Mayer and Stephanie Strombelis.

Dolo McComb, who impressed with her sensual choreography in last year’s Red Eye production of The Slow Motion Carnival, is staging dancers and movers as they explore sacred space. Titled woo (June 16–19), this piece is said to take us into the nature of truth, medicine, ecstasy, slapstick, and divinity in everyday life. Kimberly Lesik, Scott Stafford, and guest artist Lia Bentley are featured in the ensemble. 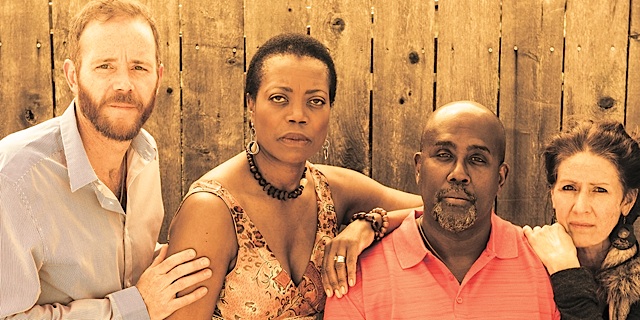 When playwright Christina M. Ham (Crash Test Dummies, Nina Simone: Four Women) was teaching lynching dramas she uncovered one by Ida B.Wells. This story related the Elaine, Ark. race riots by black farmers who were trying to organize a union. It was one of the worst massacres of the post-Reconstruction era and a historic example of grass roots organizing.

Ham shares, “I was inspired to write Scapegoat for the generations of my family that were sharecroppers in Alabama and South Carolina. I was woefully ignorant about what a sharecropper did and the exploitation that they suffered post-emancipation. The amount of poverty that was experienced by these croppers, both black and white, made me want to examine them more closely. We are all familiar with the Walker Evans and Dorothea Lange WPA photos in Alabama of the croppers, but the stories behind the photos and the thousands like them are missing.”

It’s that time of year again! 20% Theatre Company Twin Cities hosts their fifth annual Queer Prom which welcomes all (18+) queers and allies. DJ Shannon Blowtorch and performers, including Martina Maraschino and Blaze Bordeaux, will energize the prom spirit at the delicious Hell’s Kitchen. Speaking of spirits, you can grab a specialty cocktail and drink specials at the cash bar.

A prom for queer people is actually a healing experience. By and large, if GLBTQ Americans attended their high school prom at all, it was with a person of the gender they were not actually attracted to or they went without feeling the freedom to show their preferred gender expression and presentation. A queer prom can balance the scales and make for closure on the problem of feeling excluded at high school’s signature event. 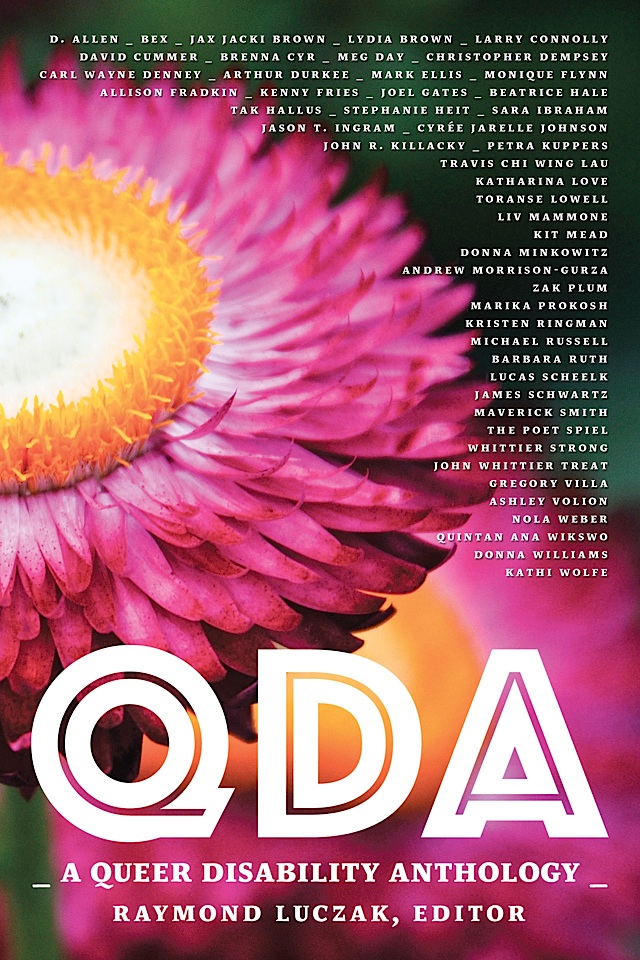 Persons with disabilities are more marginalized than any group of people. They are routinely asexualized, portrayed in infantile terms, and expected to function in the cookie-cutter ways that those without disabilities can and do. In QDA: A Queer Disability Anthology, Raymond Luczak has mindfully and lovingly edited a stunning assemblage of stories, poems, and comic strips by queer voices that stretch beyond the grievance list approach that too often passes for art in service of identity politics.This anthology is a landmark in the history of queer art and literature.

For example, Outcast: Deaf, Gay, Christian by Joel Gates is not just another queer rant against conservative Christianity. He relates specific experiences and observations of his world and his inner states in a way that is poignant, wrenching, and clear. Early on he had feelings of same-sex attraction and as time went on he became increasingly alienated from not being free to talk about it and, therefore, work with it. There is that tragic division between the family you love and the person within you that you are meant to be. Few stories capture that as vividly as this one.

Poet Marika Prokosh’s The Use of Blindness is one of those rare and great works that immediately plunges you into its own distinct dimension. She takes us into the full weight of her experience, something not widely understood in these days of sound bites, slogans, and instant gratification: “My sudden double / vision was caused by a swollen cornea, / not an illustrative fracturing of the self. Reverse / the cause and effect. If you invoke a simile / for schizophrenia, I will scream.” Prokosh makes demands of her reader, as opposed to appealing to a lower common denominator.

Donna Minkowitz’s How I Got Disabled is a lively account of how individual a disability can be as she relates her struggle with Repetitive Strain Injury (RSI): “It was a strange ailment, reader.” She also goes into fascinating bits and pieces about women she has dated. Kathi Wolfe of The Uppity Blind Girls Poems fame is well-represented in QDA with irreverent and delightful selections.There is also fine poetry by David Cummer. Moreover, there are captivating comic strips by Bex and Zak Plum.